Starting the serious tidyup in my studio in anticipation of the arrival of a couple of Studio Creative Consultants (aka relatives), I reacquainted myself with various things:

1. Box of 48 Sennelier Oil Pastels hiding underneath a couple of mostly used A3 sketchbooks.

2. Plastic pill organizer with watercolour squeezed into each day. I knew it was Sennelier’s limited edition natural colours, but just as well I’ve this photo to remind me which colours they were.

3. Two unused tubes of Green Gold, one Golden, one Winsor & Newton. The Golden version is a Series 7, so not an insignificant find (read: it’s an exquisite but expensive colour).

4. Postcard sent by a friend from Tuscany in 2011 featuring a painting by Pierro-della Francesca, Madonna del Parto, that she said had its own museum in a hilltop village.

5. Postcard from National Portrait Gallery in London of one of my favourite paintings in their collection, Justin Mortimer’s 1992 portrait of Harold Pinter, which is two-thirds red negative space. (Both postcards had got shifted from the front of a shelf to between books.)

6. Exhibition catalogue Monet et l’abstraction/Monet and abstraction, which delayed the tidyup for some time as I flipped through the pages. Monet’s late paintings, where he uses nature as a starting point but it’s mostly about pattern and colour, as some of my favourites. “The object no longer defined the pictures subject, which was now subject to the painterly gesture … The image is no longer a hermetic snapshot of reality, but a place where sensations are assembled in a duration that is also a state of harmony, an even expanse in which memory is fed by the simple pleasure of seeing.” (page 95/6)

7. A note in my handwriting that says: “I have the beret of awesome artiness.” I’m still pondering this; I imagine it came from a conversation with the In-House Art Critic about different hats one wears in life.

8. Handful of reference photos of big waves I took at Storm’s River, South Africa in 2007 (“real” photos, on photo paper). It’s where most of the photos were taken for my article Sea Painting: Understanding What You’re Trying to Paint. 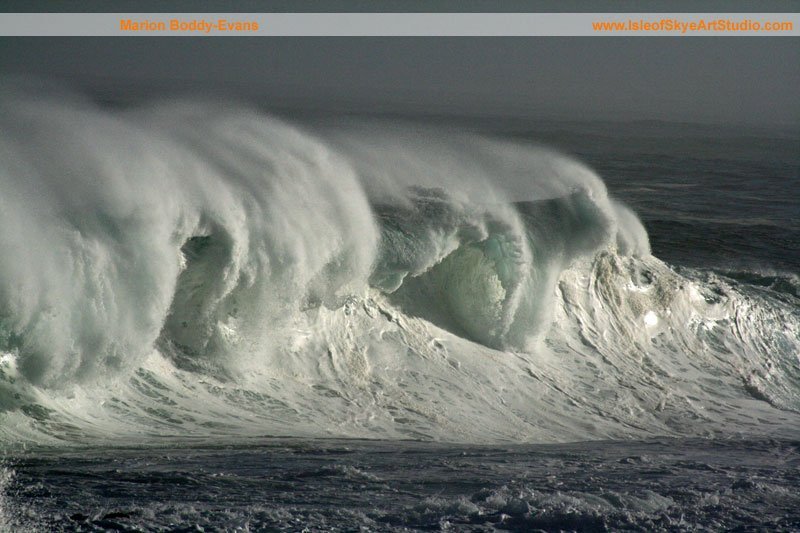 One Reply to “8 Studio Discoveries”