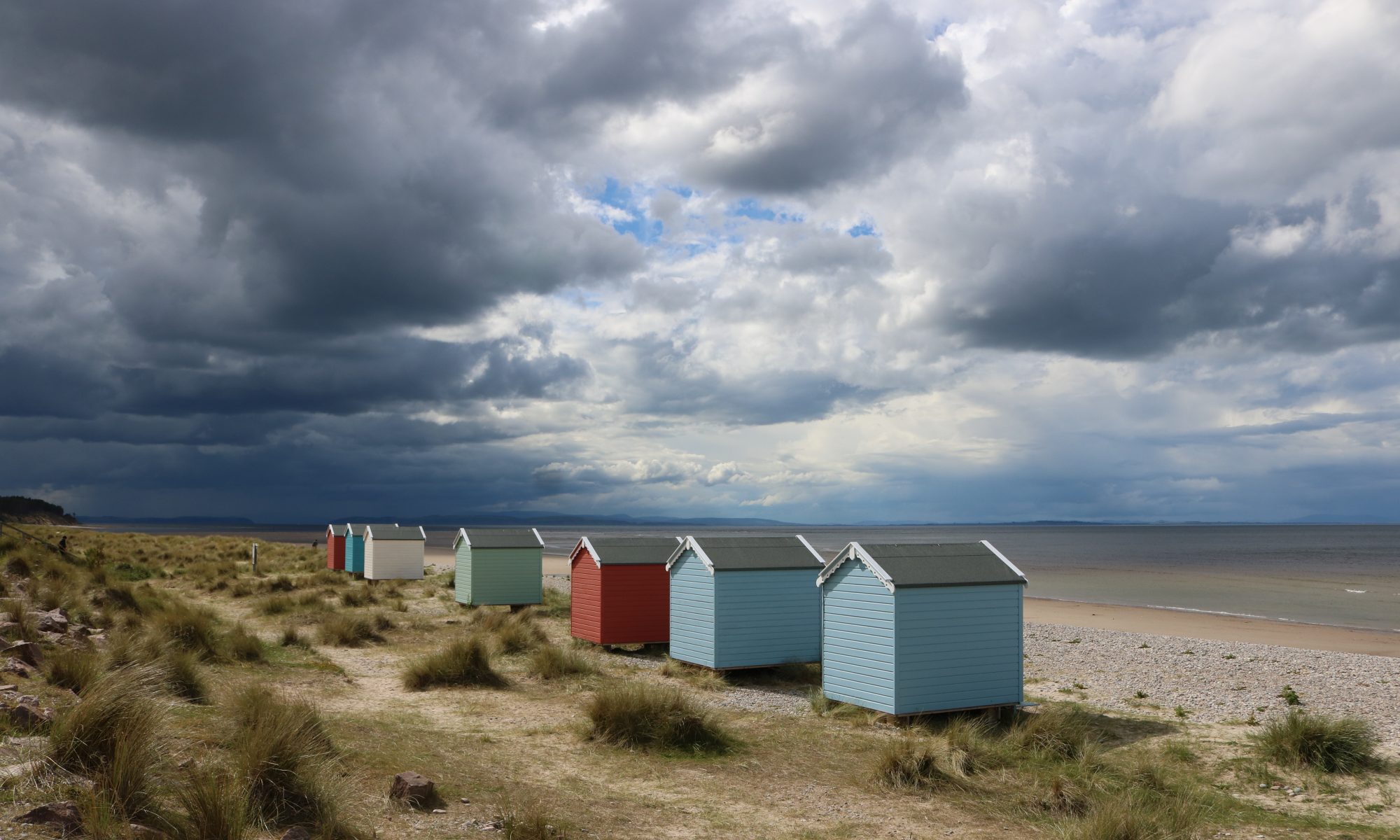 On the beach at Findhorn (east of Inverness), there’s a colourful row of beach huts sitting atop the dunes. When I was there, the sun was shining but rain clouds were blowing in from the west, creating a dramatic sky.

The photo I’ve chosen for July’s painting project has a definite focal point (for everyone who missed having one in June’s project!), plus the compositional challenge of strong diagonals on the foreground pulling the eye into the distance but then using the clouds to lead the eye back up and out.

In terms of perspective, draw lines towards a vanishing point on the horizon for the top (apex of the roof) and bottom (lower edge of the back wall) of the row of beach huts. Spend a bit of time getting it figured out in your head, then recheck it later. Trust yourself rather than colouring-in your drawing.

Look at how much of the back wall of the huts you see, how you see less of each as they get further away. Also the width of the huts, and the angle of the ridge of the roof compared to the horizon of the sea. Notice also that the side wall is darker in tone than the back, and that it’s only the nearest huts where we see cast shadows.

If you can’t face the perspective on the architecture, consider leaving some or all of the huts out. It’ll be quite a different painting, and for me the main decision would then be whether to make the sky most of the composition (three quarters than the not quite two thirds in the photo).

Here’s a photo I took when I’d walked past the beach hut. The figures give a sense of scale. I’m also looking down at them, there being a high bank of pebbles at this stretch of the beach. They’re very silhouetted, but watch out for making them cutouts; imagine some clothing and colourful darks.

The composition with the diagonal bands of colour in the foreground is anchored by the figures, giving the story of the scene continuing in both directions. Without the figures it becomes a painting about bands of colour and texture.

Here’s a close-up of the beautiful pebbles on this beach. A colourfield of pattern, shape and colour. Click on the photo to get the biggest version of it.

The pebbles could be fun to do with granulating watercolour, or texture medium. Also as a collage with different papers. Or watercolour with oil pastel. Or larger than life on a big canvas. I wouldn’t try to paint them all, because I’m not that patient, rather pick a section or use it as a jumpstart.

To my eye, it’s the dark shadows between and beneath them that give a sense of depth, rather than form shadow (changes in tone on a pebble). Probably enhanced by the memory of how flat and smooth most of the pebbles were here.

As always, medium, size and format are up to you. I look forward to seeing what this inspires. If you’ve done a painting in response to June’s project, or any earlier one (see list of painting projects), do email me a photo to put in the photo gallery so we can all enjoy it. Happy painting!