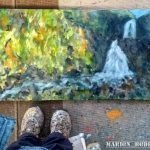 So having stared at my painting-in-progress on and off, pondered it and where I might go with it a lot, visited the location again, I decided I liked the brushwork on the painting too much to risk messing it up and so would not continue working on it. Just yet, anyway.

Instead, I would start another painting on the same subject, and push this further, using layers of line along with brushmarks. And while I was feeling brave and bold, I’d do it big, so set up two 100x100cm canvases on side-by-side easels. (It did mean the In-House Art Critic was temporarily unable to get easily to the chair in the Studio Reading Corner.) 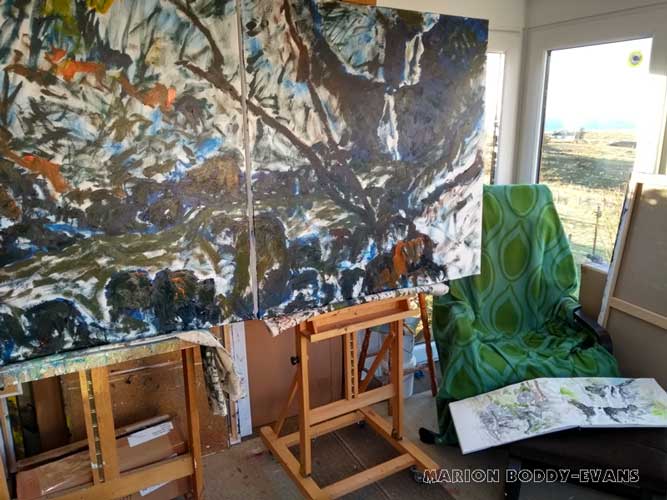 These painting-in-progress photos are unfortunately a little out of focus (taken in the low winter light at the end of the day). 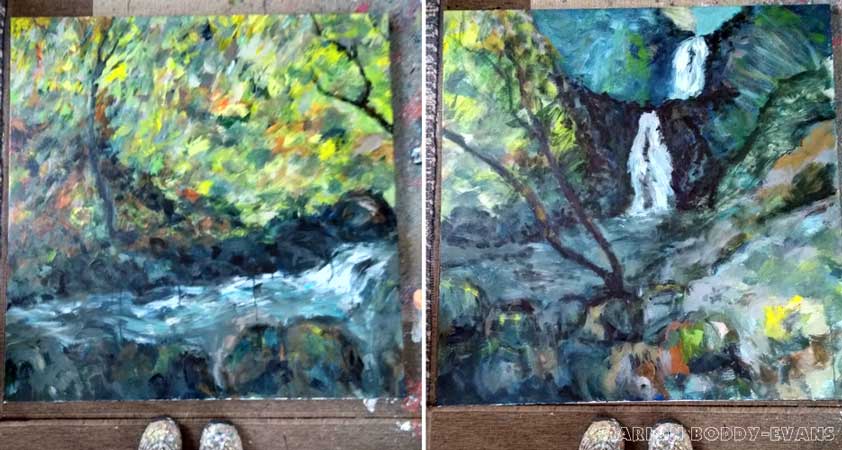 I liked where I’d got to, but felt I’d lost the energy of my original layers of mark making and it lacked line. So implementing my rule of “be dramatic, you can’t tweak a painting into working”, I took a handful of acrylic paint markers and worked a layer of line over the painting, trying to do it as freely as I would if I were drawing in an initial layer of continous line. It was both frightening and liberating, and the further I went, the freer I became.

I deliberately stopped to take a photo of the purple line I added to the waterfall rocks, which is where I started adding the line layers, so I’d have photographic evidence a reminder. It felt over-the-top when I started, but had additional line layers of darker colours on top of this. 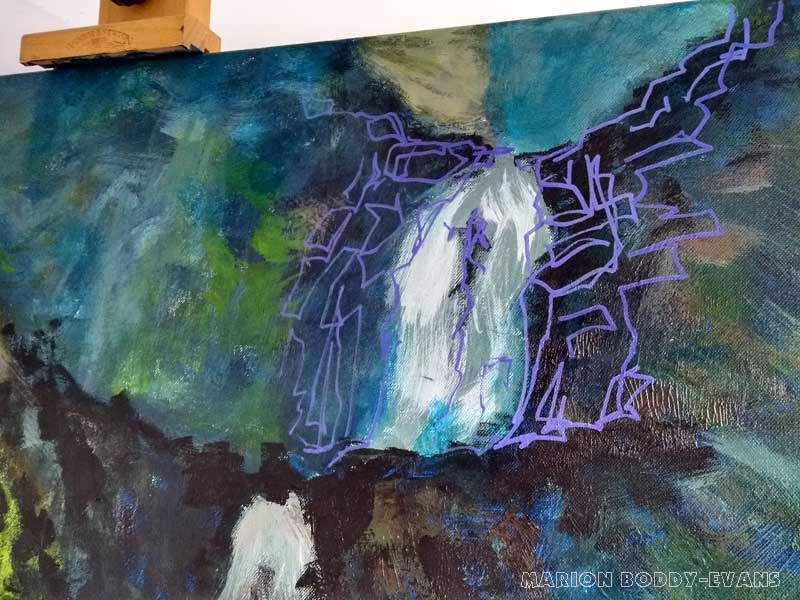 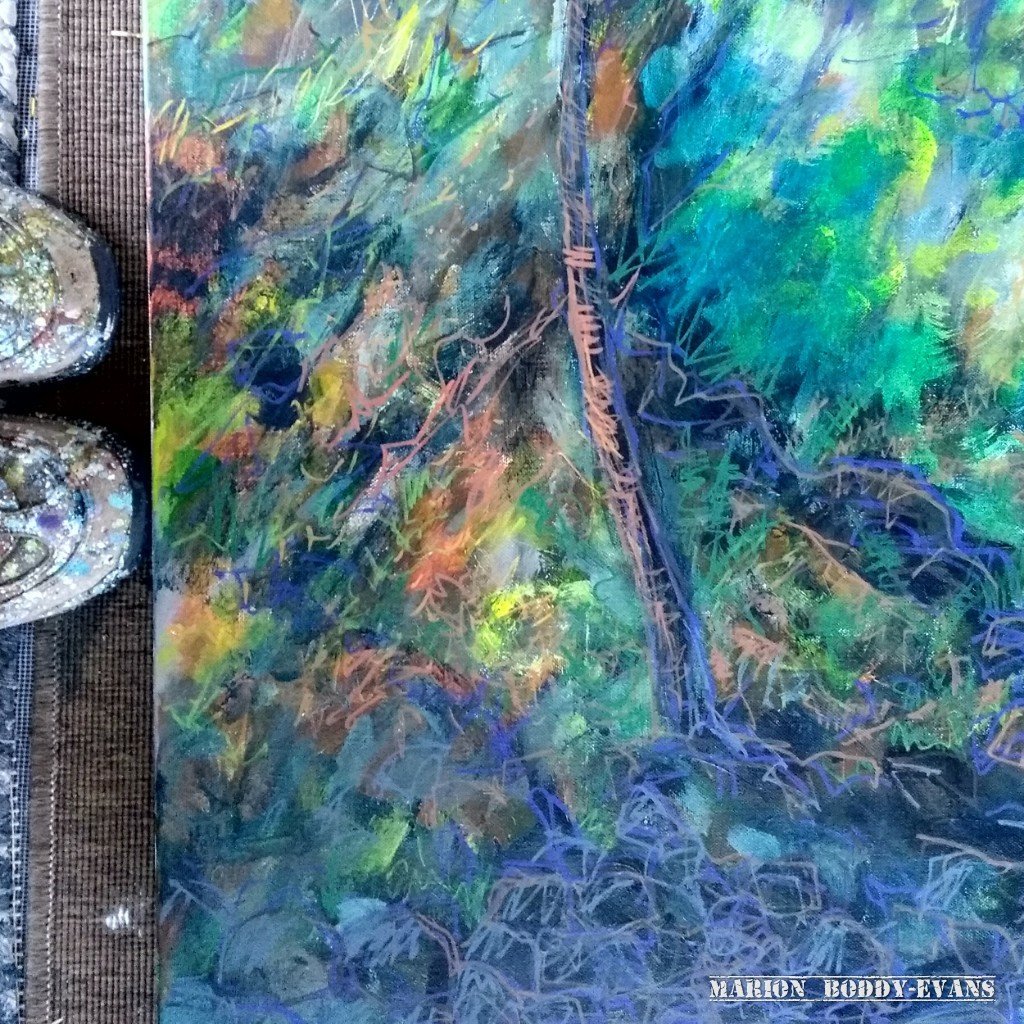 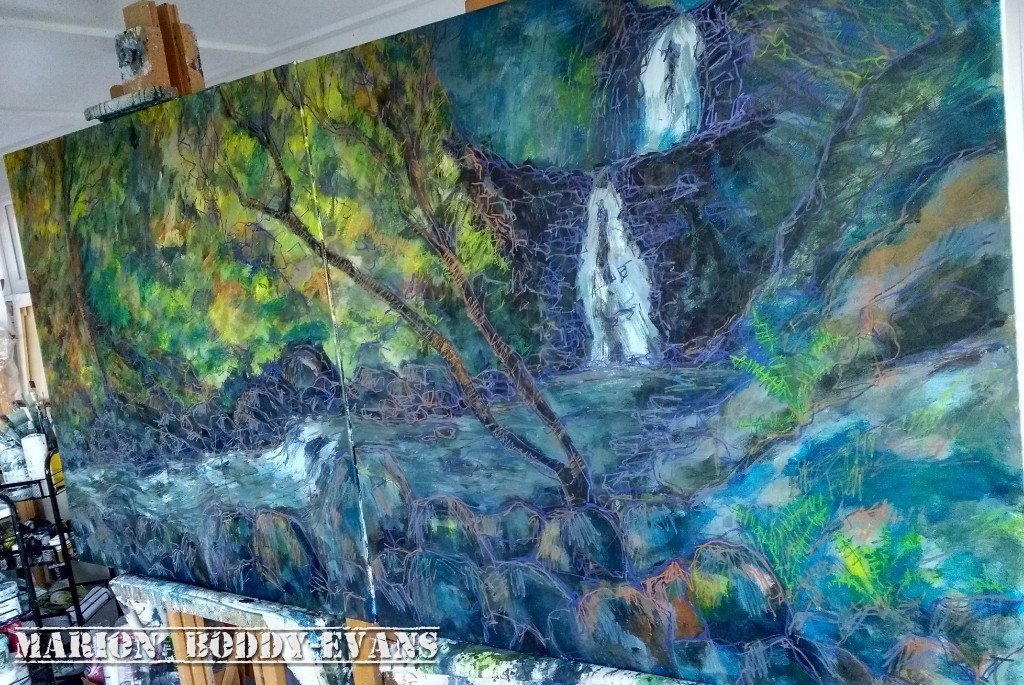 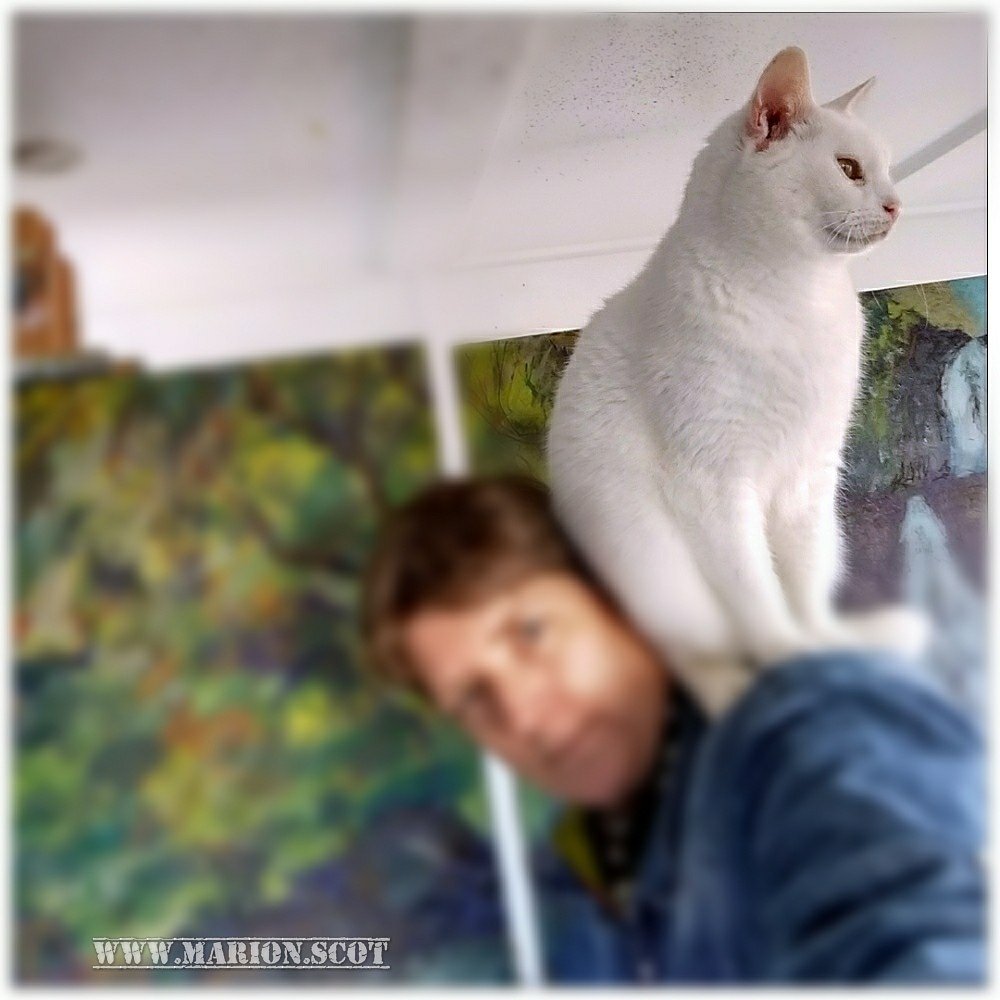 I don’t have any other progress photos, but it involved overpainting some of the line to knock it back, some glazing to enrich colours, and just generally “some more”, until I started to think I was happy with it. I showed the In-House Art Critic, who told me to stop. I was surprised as I’d thought he’d say I should hide more of the line, but he said that he liked how the painting reveals more and more mark making as you get closer. 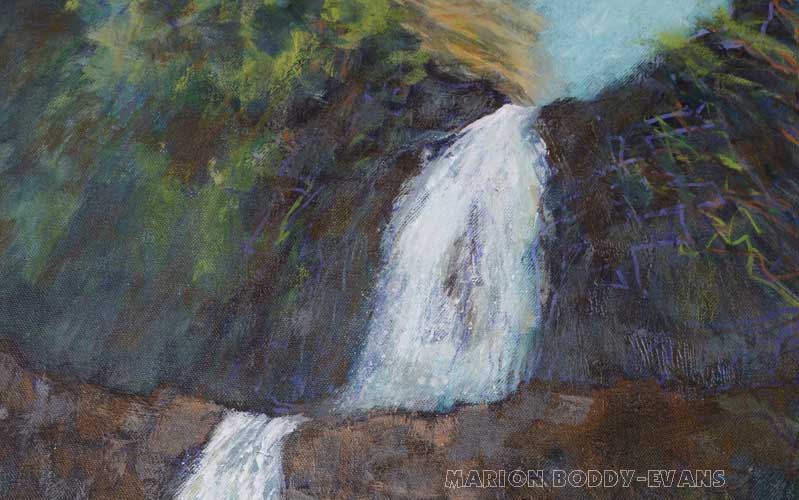 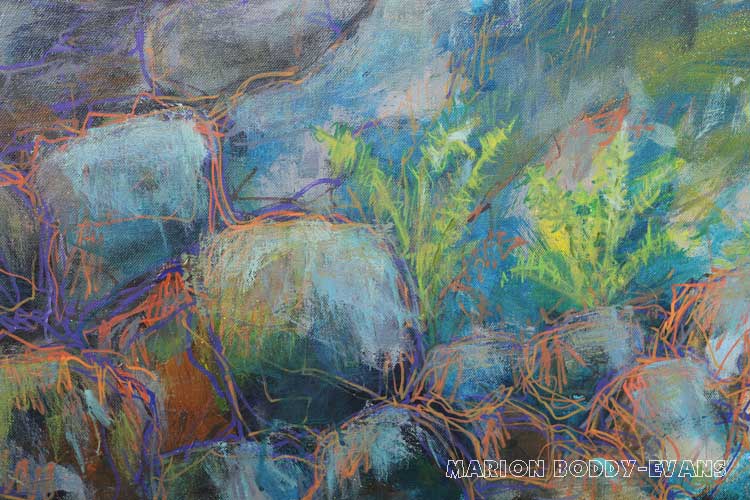 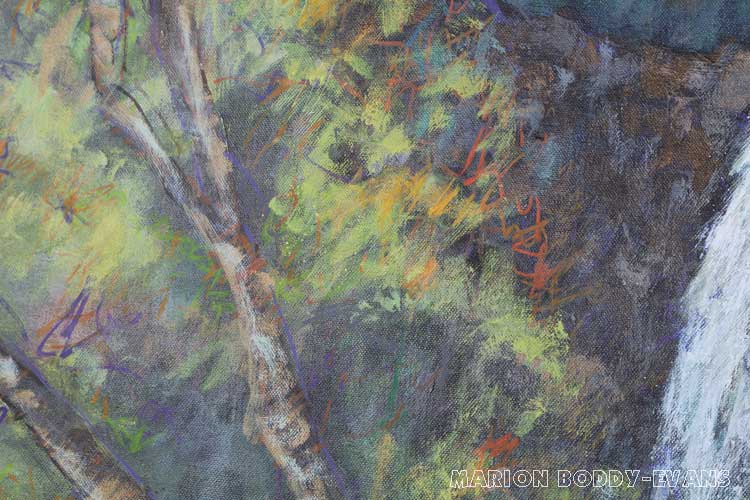 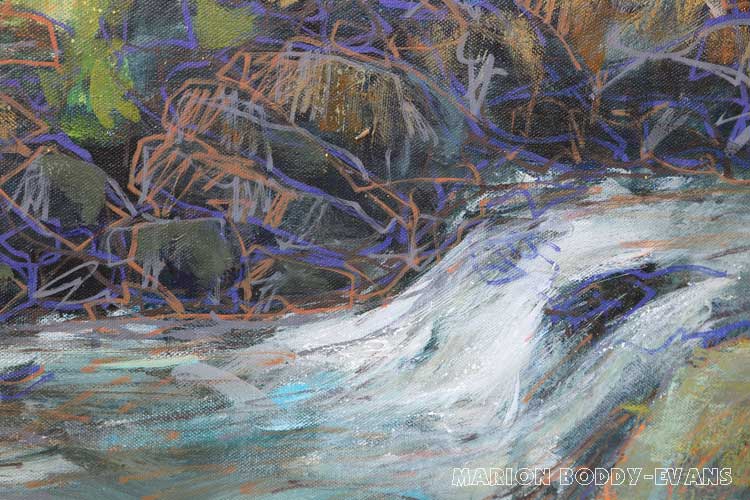 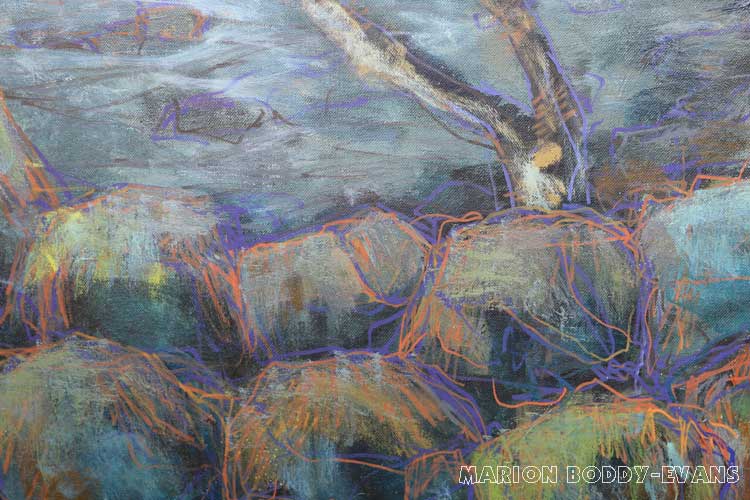 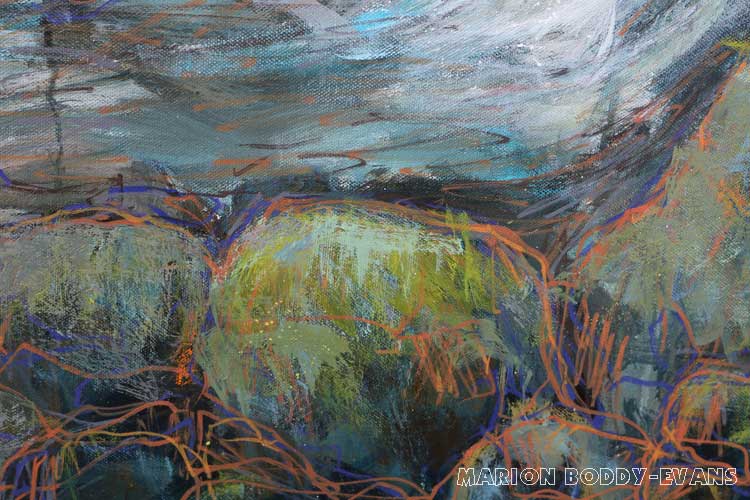 And the full painting, showing you where the details come from: 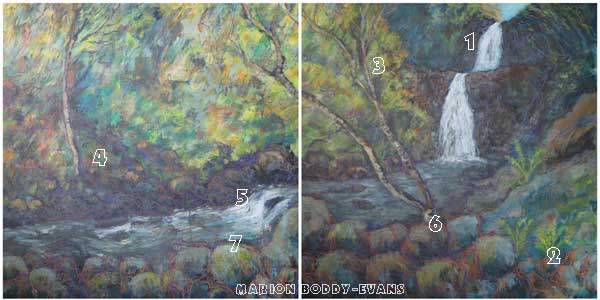 The title “Never Still” comes from my friend Lisbeth in Australia who, when I sent her photos, said: “I think the lines, and the colours you’ve chosen for them, give the painting a dynamism that real life has — nothing is really ever still, even rocks. Nothing is still inside us as well.“

2 Replies to “Perhaps Being Over-Ambitious (Part 2)”