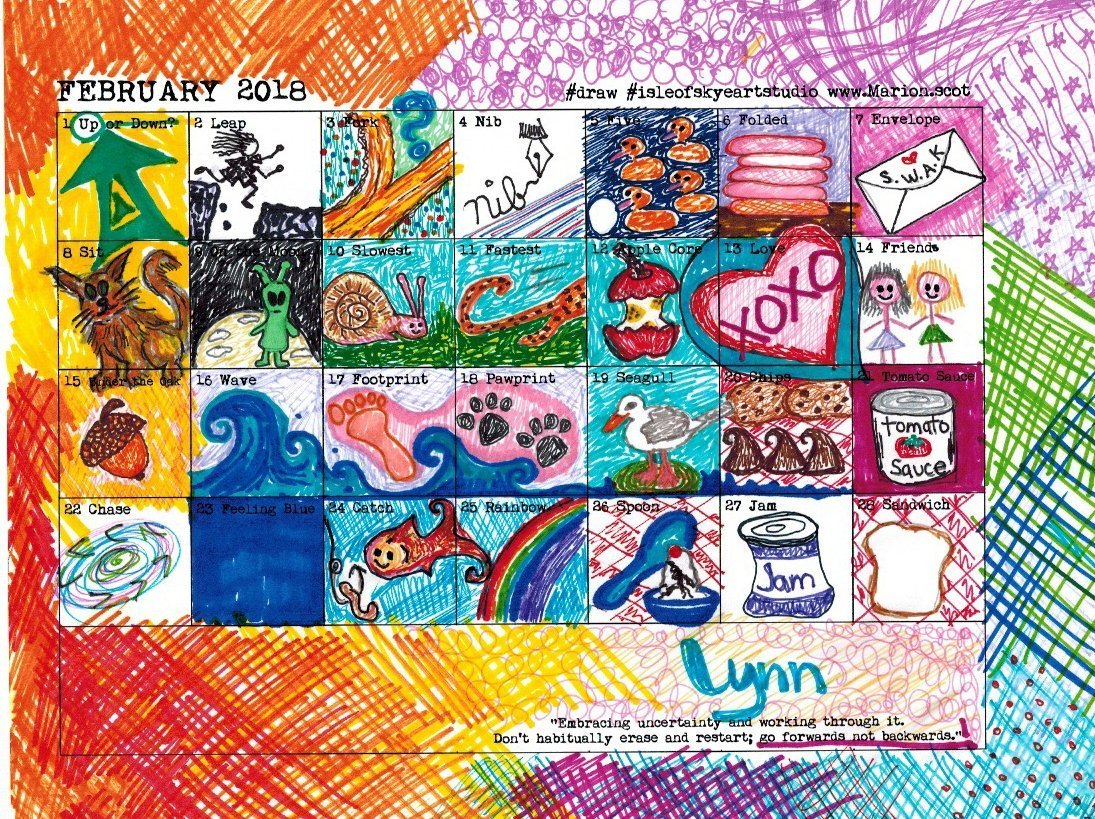 I’ve once again had such fun looking at the photos of completed February Word Prompt charts. Once again ideas that would never have occurred to me (including cultural reference such as Chase being part of a bank’s name), and the way everyone’s done something that’s different, all from the same starting point.

From Eddie: “It was fun and challenging at times.”

From Erika: “This was a tough one. Some days came by easy, others I could not find a picture in my mind whatsoever — but was determined to fill all the blank spaces, eventually!”

From Gail: “I really enjoyed this project since this past month is one of the more dismal months of the year around here and I sit around bored out of my gourd trying to get inspired to pick up a brush or a pencil or even think about art. This little project got me going and I?ve managed to draw, paint or experiment artistically every day. Thanks for the motivation and inspiration!”

From Lynn: “I am a doodler… when I was seeking inspiration, I would doodle along the edges of the sheet… I used colored pens and markers, so it is mostly color. I find it challenging to draw so small and with the pens it isn’t very forgiving, but I didn’t give up or tear it up, so that is good!” 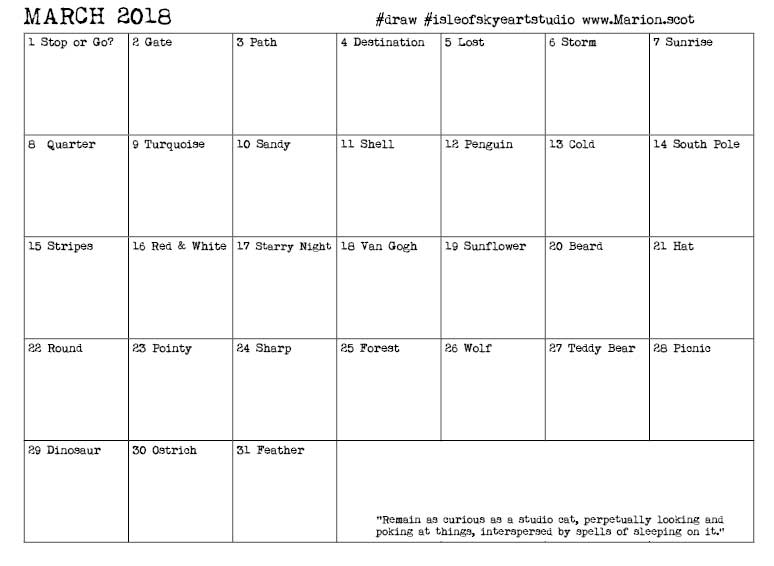 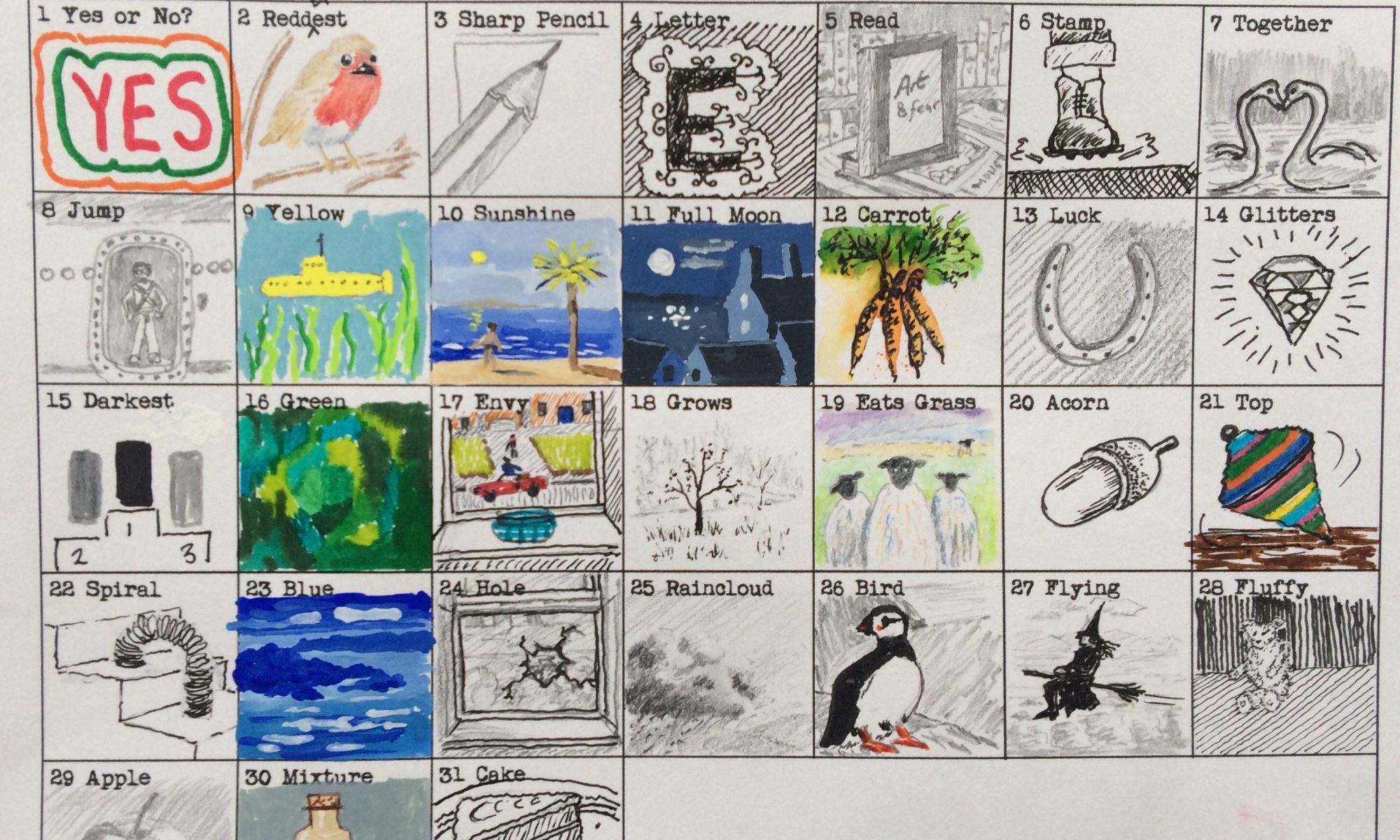 Thanks to Eddie and Wendy for sharing their January charts! I really am enjoying looking at what each word has prompted, and the differences even with something like a carrot. It made me realise I’d included the greens, even though can’t remember when I saw an untrimmed carrot in a supermarket. And a witch for flying did make me chuckle (and wish I’d thought of that!).

This is Wendy?s, who said: “A frustrating month time wise and found this helped the ‘guilt’ of not doing more!”

This is Eddie?s, who said: “As you can see I managed every day (though I?m not sure how long that will continue) and really enjoyed coming up with a response to the word of the day.”

Did you notice what book’s being read at #5?

Additional photo submissions are welcome! Just email it to me at art(a)marion.scot with a note as to how you want it credited or if you want it shared anonymously. 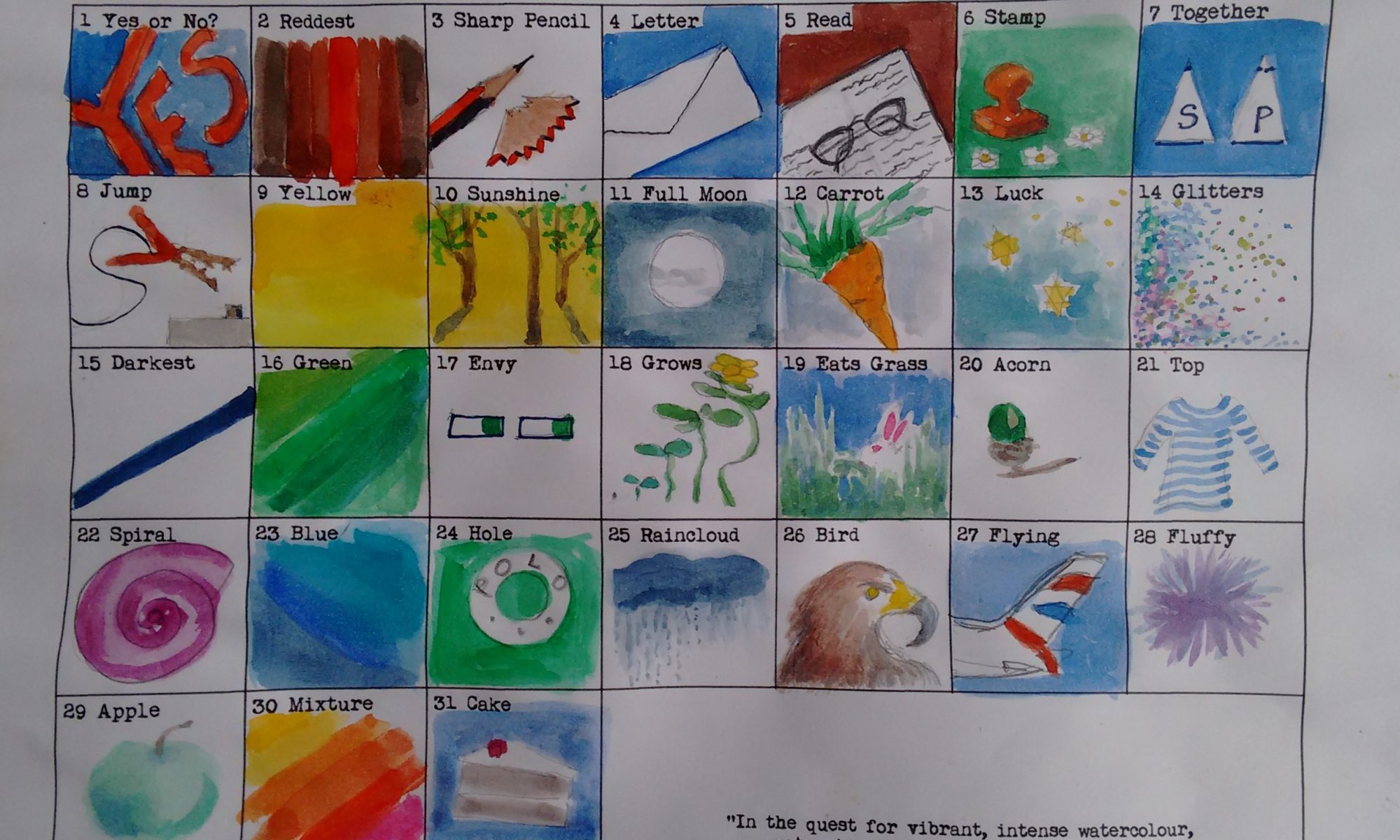 I’ve really enjoyed looking at the photos of completed January Word Prompt charts sent in. Ideas that would never have occurred to me, the way everyone’s done something that’s uniquely their own, sometimes ideas vastly different and sometimes more similar, all from the same starting point. Thank you!

This is Tessa’s, who says: “Sometimes I stuck to one a day, often I wanted to do more than one, sometimes did which balanced out days when I didn’t. I liked that it was on ordinary paper and for me an ideas thing rather than serious drawing.”

This is by a Skye-based creative friend, working at a slightly larger scale on her own grid, in inks.

As I said yesterday, my January word prompt chart had more gaps (18) than completed blocks (13). It was also done in pencil only (until yesterday). There’s no reason it couldn’t be done only in pencil or monochrome, but overall Studio Cat Ghost wasn’t at all impressed by my performance.?Something about not leading by example, nor starting the year as I meant to continue. 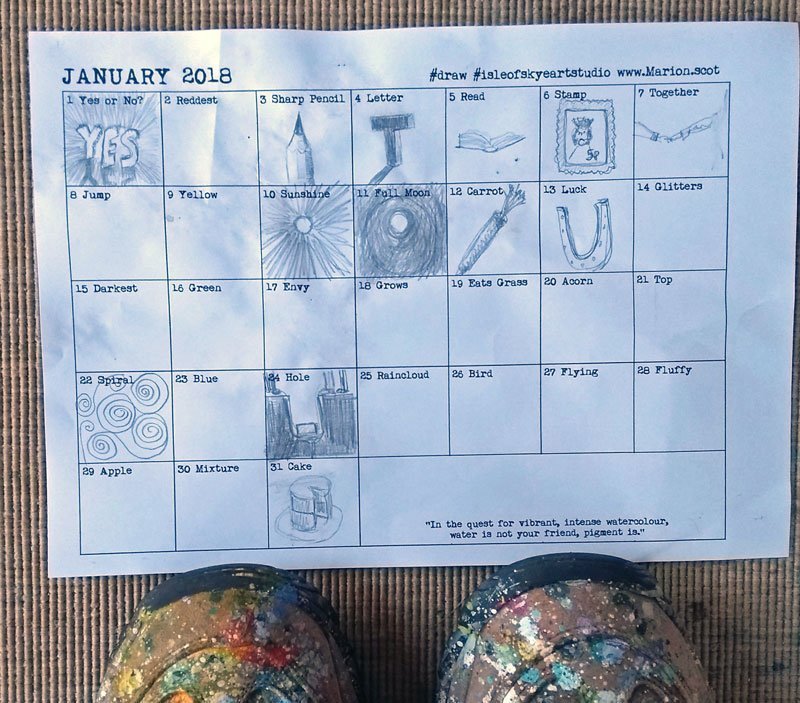 I tried telling him he should cut me some slack as I’d been away in Glasgow at Scotland’s Trade Fair, but apparently that was no excuse as all I needed was a pencil. So, rather than beat myself up about what I should have done, the gap between what I’d intended and what I actually done, I decided to spend a little more time on it, sat down with my watercolours and started adding some colour. Studio Cat supervised. 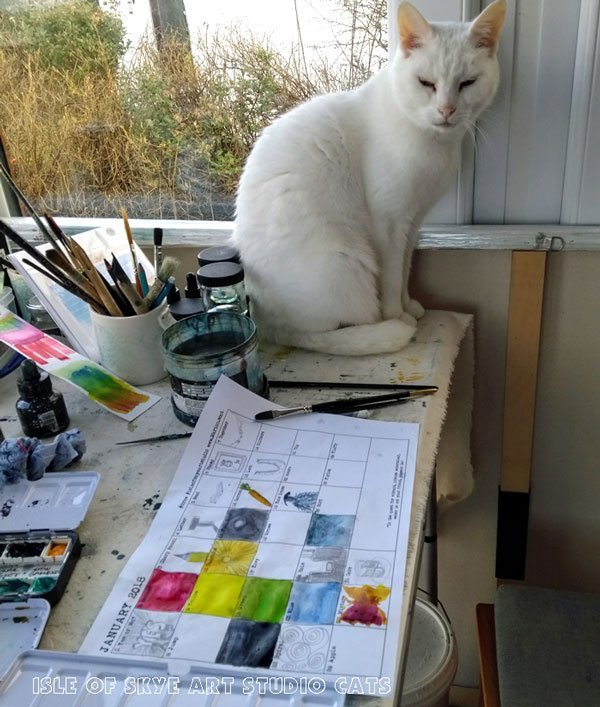 I confess, once I started adding colour I liked it a whole lot more — the result and the doing of it. It’s still got a bunch of white blocks, and most of it I would rate “could do better” (I know, I know, I’m not supposed to say this sort of thing about this activity) but that was squashed under the enjoyment I had with the watercolours and the knowledge that I ended the month with more blocks completed than not. 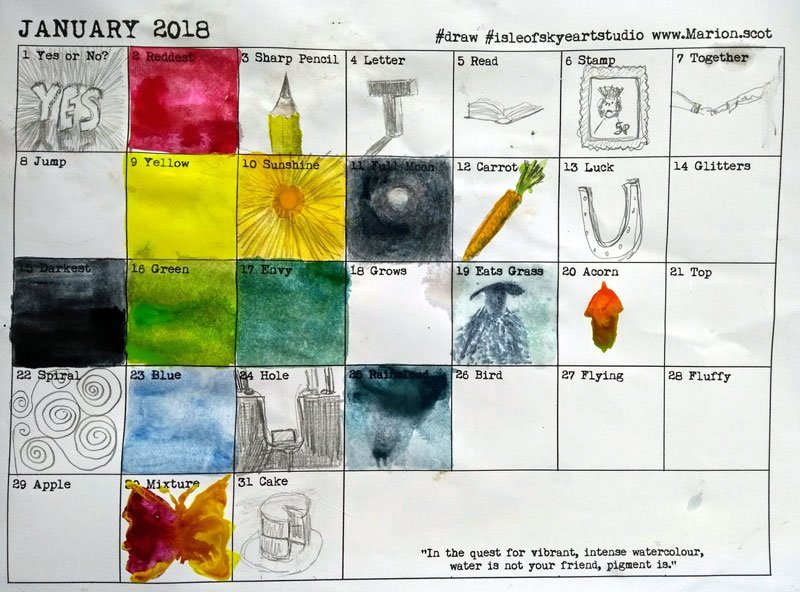 My blue (#23) was done with a new-to-me Daniel Smith watercolour made from genuine lapis lazuli, which has been used to create ultramarine since the 13th century for ultramarine, though these days we nearly always use French ultramarine, a synthetic, cheaper version created in the 19th century.

Studio Cat’s verdict as I tidied up: he still wants me to do a drawing of him for #28.

So that’s the first month 2018 almost done and dusted (okay, admittedly done with very little dusting), and it’s time for another set of word prompts, for February. Same deal as for January, I’ve created a printable grid (download here) with 28 daily word prompts. Print it, pick up a pen or pencil, don’t overthink it, and don’t beat yourself up if you don’t get to it every day. 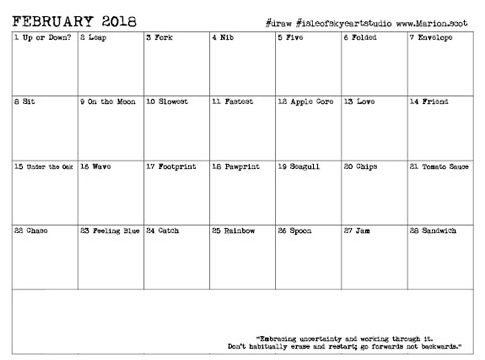 I’ll share what my January sheet looks like tomorrow (spoiler alert: it’s been done in pencil only and has so many blank spots that I’m tempted to quickly fill those in today, so let me declare now that it’s got 13 block drawn so I can’t cheat), along with that of an artist friend (spoiler alert: it’s what I wish mine looked like).

Additional photo submissions are welcome! Just email it to me at art(a)marion.scot with a note as to how you want it credited or if you want it shared anonymously. Or post a comment below and let me know how many blocks you did in January. 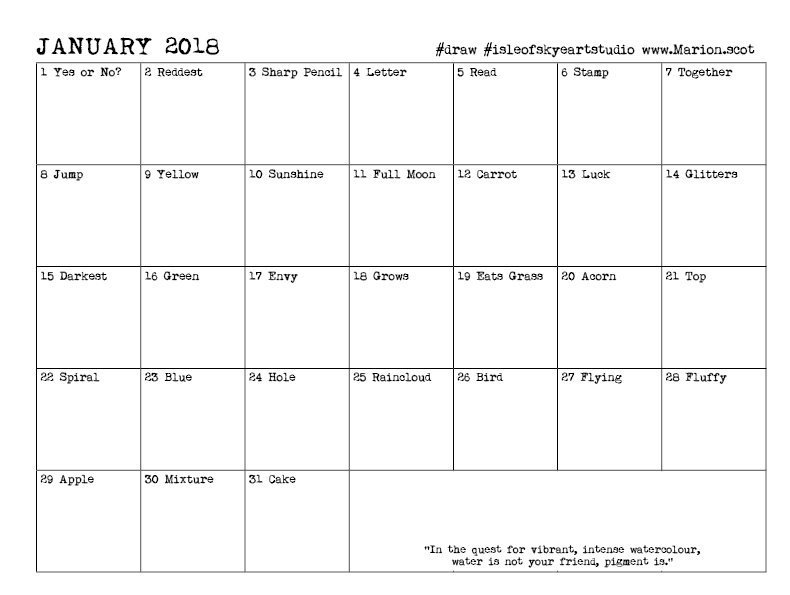 I wonder how many people promised themselves a year ago that they would absolutely, definitely, cross-your-heart draw or sketch or paint every single day, and how many have promised themselves it again for 2018. If that’s you, cut yourself a little slack, forgive yourself for the failure to keep that resolution, and don’t set yourself up to fail again.

Promise yourself this instead: that you’ll draw more days than not, measured across a fortnight or a month. And let the little, quick doodles and drawings count too, not only the “serious drawings”.

To help you jumpstart a regular drawing habit, I’ve created a printable grid with a daily word prompt (download it). It gives a suggestion and a space for a tiny drawing, which you could do quickly while you wait for the kettle to boil or on hold on the phone.

Don’t over-think or over-complicate it, just do something, there’s no right or wrong. The first block is straightforward — you up for this, yes or no?

Send me a photo of your grid at the end of January and I’ll post it on my blog with next month’s word prompts. No prizes, not even if you do all the blocks earlier, it’s a long-distance race not a sprint, about building artistic stamina and habit one small step at a time.

Want to Learn to Paint?

1 to 1 mentorship via my Patreon