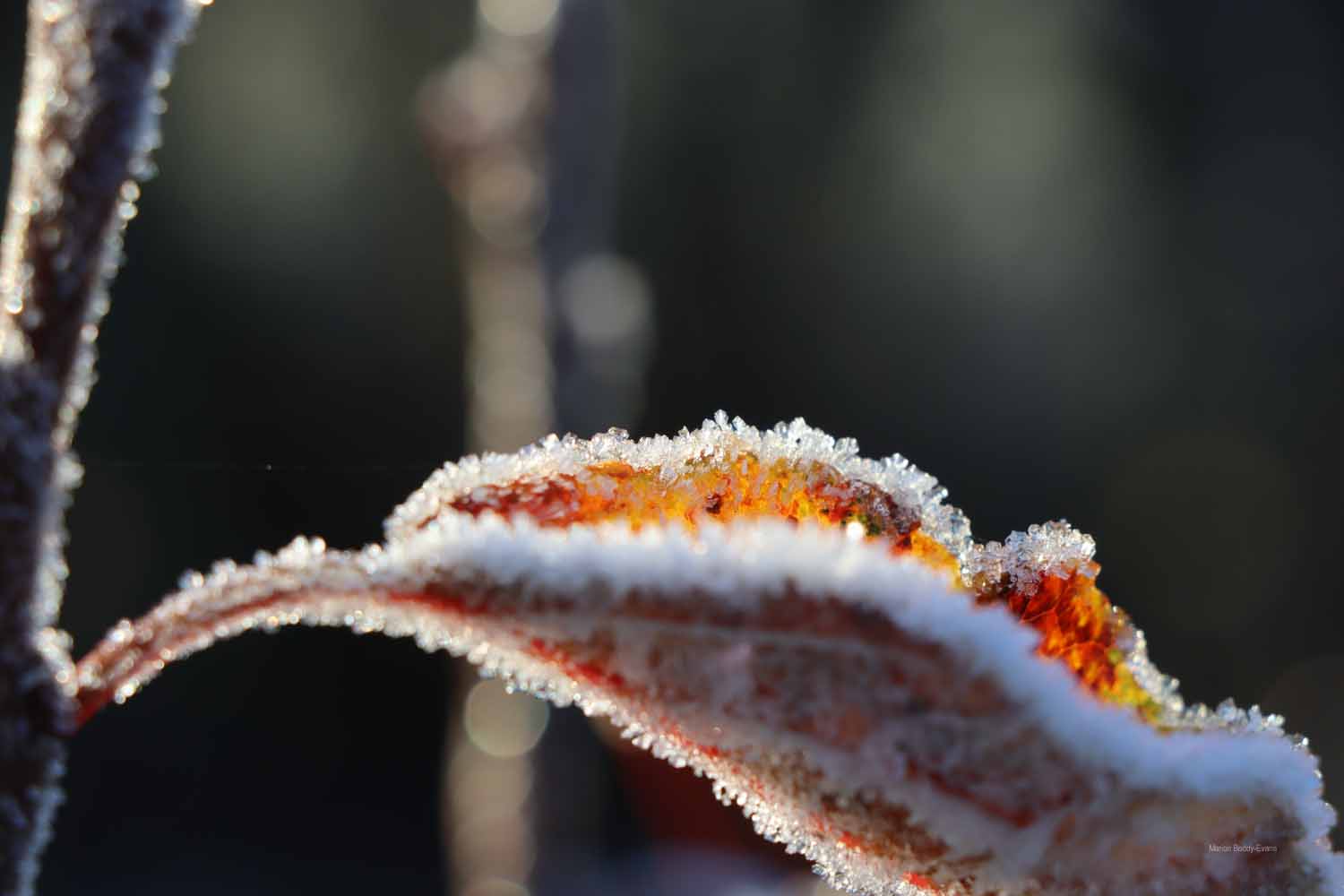 Wrapping up warmly, I took my big camera out to enjoy this morning’s frost. These photos are a selection of what caught my eye. They are about enjoying my garden in late autumn, the way frost changes the appearance of things and catches the sunlight. I am not thinking of them as leading directly to paintings at the moment, though the patterns and strong lines have been added to other memories from the garden. 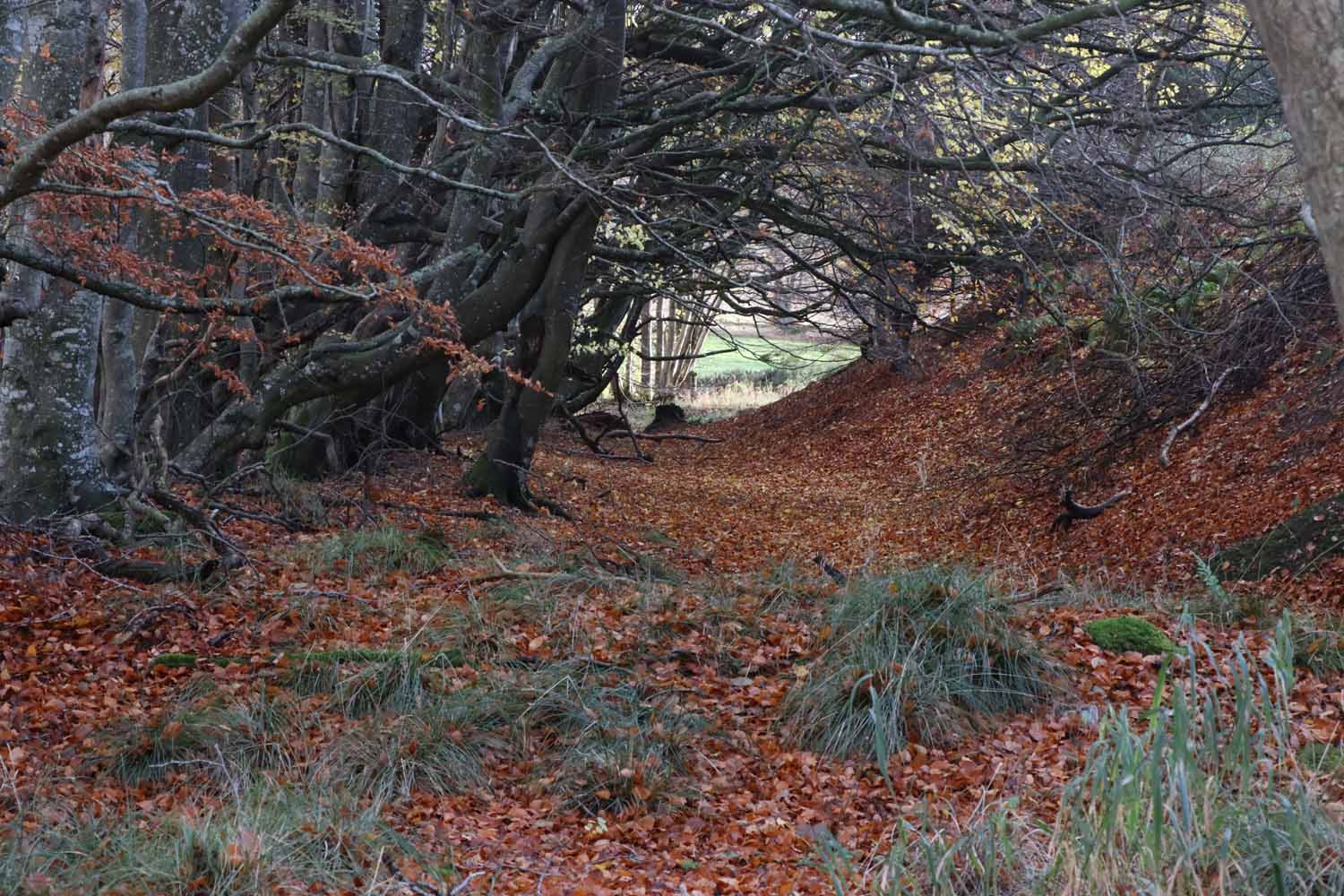 I couldn’t resist going out with my ‘big camera’ to a patch of trees at the bottom of the village where the autumnal leaf-fall is like walking into one of Klimt’s woodland paintings. I first discovered that the northeast did autumnal colours beautifully in 2014, heading back to Skye from Gardenstown (see this blog) and it’s a joy to now have it on my doorstep.

I did get asked twice what I was photographing, once by a cyclist and the other a farmer who drove up and told me he was looking for an escaped bull, to which my first thought was that this was what crofters tell wanderers on Skye too, but then I realised that the bull I’d seen in the neighbouring field this morning wasn’t there. I did manage not to enthuse to either of them about Klimt and limited myself to a simple “the colours of the leaves” explanation. 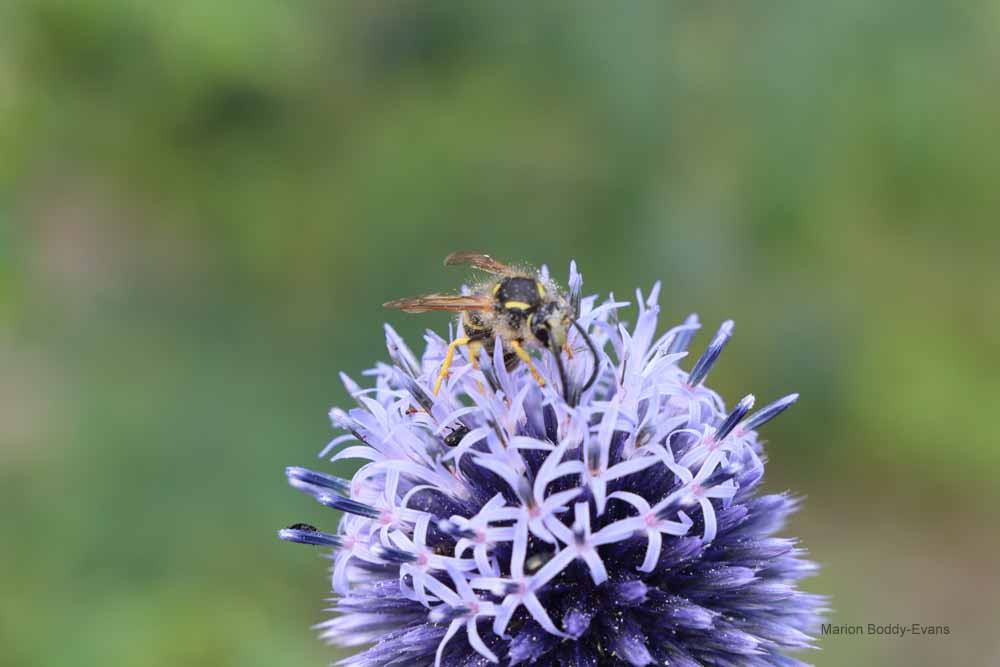 I may have only painted sporadically in the five months since we moved (not counting all the metres of interior wall) but have had a colourful summer thanks to the wondrous flower garden. There are still new plants emerging, new flowers opening. One of the latest is this (an echinacea the PlantFinder app tells me):

I think it’s almost impossible to look at without tracking along the squirls and spirals in the centre, then out along the petals which seem determined not to touch one another.

In the photo below my camera blew out (overexposed) the colour in the petals. For me it’s become one of those “abstracts from nature” images, with the oranges and greens of the centre feeling as if they’re reaching out towards me, whilst the petals have become a gentle background rather than part of the flower.

Another flower that’s strongly grabbing my imagination with its lanky stems and blobby ends is Japanese anemome. I’ve had a go at painting the pink flowers (see this blogpost) but I also think that there’s something to be explored in the curves and lines without the flowers.

This could be minimalist, as lines against white paper, or a dominant layer of pattern/line/shape against a background of broken colour (like the out-of-focus colours in the photo below).

It’s not all about bright colour either. There are plants with grey foliage and flowers that have gone to seed where the colours are more muted, inviting explorations of “interesting greys and browns” along with line and pattern.

I’ve spent time watching various pollinators too. This globe thistle is such a favourite I’ve been able to get up close without them flying off.

Three of the apple trees we planted are “unknown apples”, ones at half price because the labels had blown off during a storm. Looking at the apples, they’re all different varieties of reds. Which creates possibilities for a “still life with red apples” investigation of reds. If they survive that long before being turned into apple crumble.

Giving the white tables and chairs that were in the garden a fresh coat of paint is on my to-do list, but they won’t rust to bits over another winter if I don’t manage before it’s too cold. The in-house art critic and I have enjoyed many a coffee sitting there.

It was six minutes off low tide when I got to Banff. I can be this precise because I checked the tide times before walking along the stretch of white sand that’s hidden at high tide.

First I had to resist some pebbles to get onto the sand.

The sand stretches almost all the way to the harbour, along with a robust wall that suggests the sea can get wild at times.

There’s a set of concrete stairs towards the other end of the sand, and a few precarious-looking vertical metal ladders up the wall further on.

A section of the harbour is being rebuilt, and the water pumped over the wall.

Parts of the harbour are the very old vertical block construction I first saw at Portsoy, which is a bit further north. It’s a pattern that so wants to be painted!

But then so do many other bits. This morning’s walk was just about looking, enjoying, absorbing. I did meet one of the two people I knew in Aberdeenshire before we moved here, walking his dog on the beach, so there was some chatting too.

Back along the road, sandy beach, over the pebbles, and home. 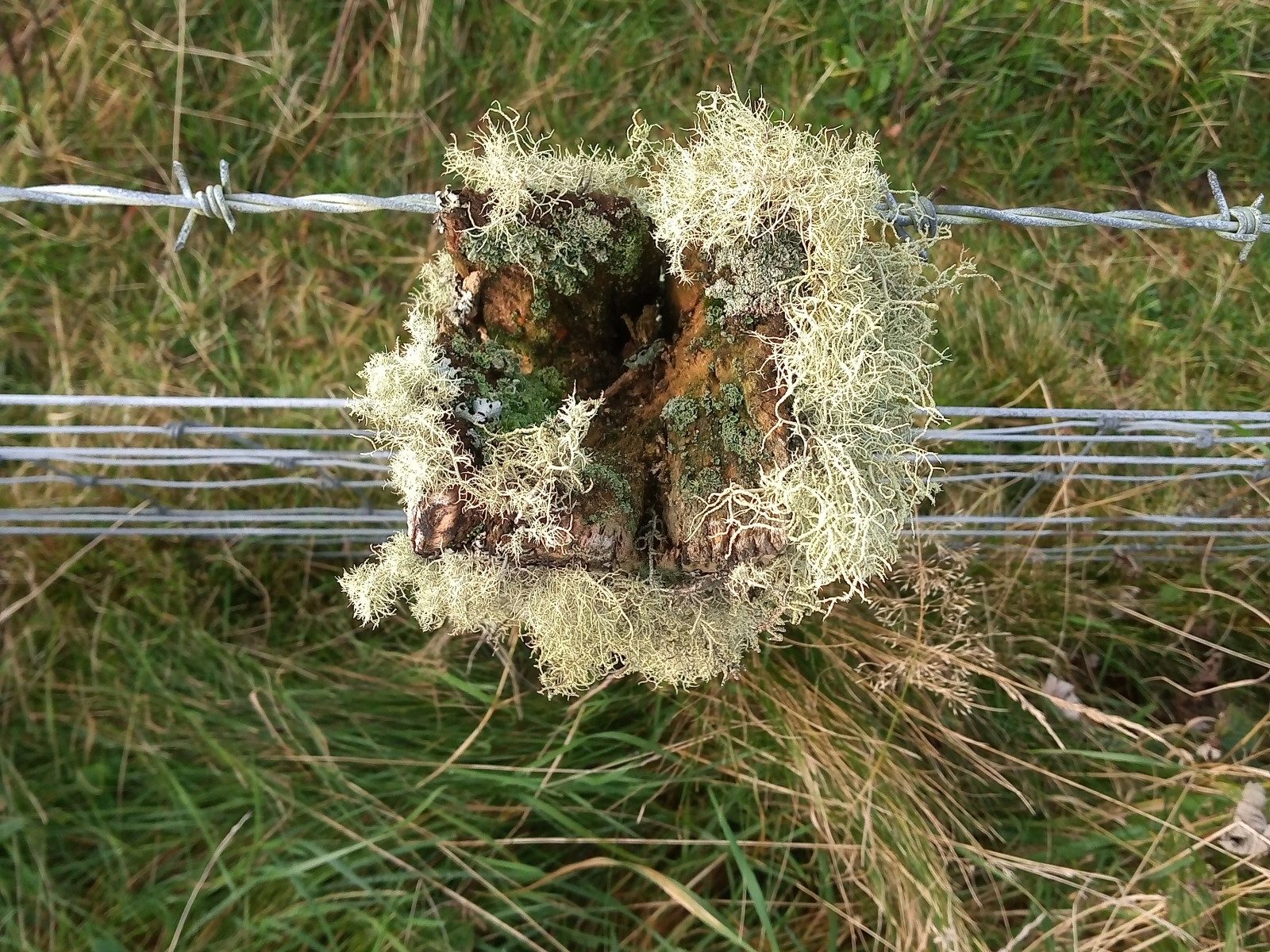 Walking to the postbox today, the thing that kept grabbing my attention were the tops of fenceposts. Weathered abstracts and miniature worlds.

And for you-know-who-you-are from art group, a “green” landscape to study greens. 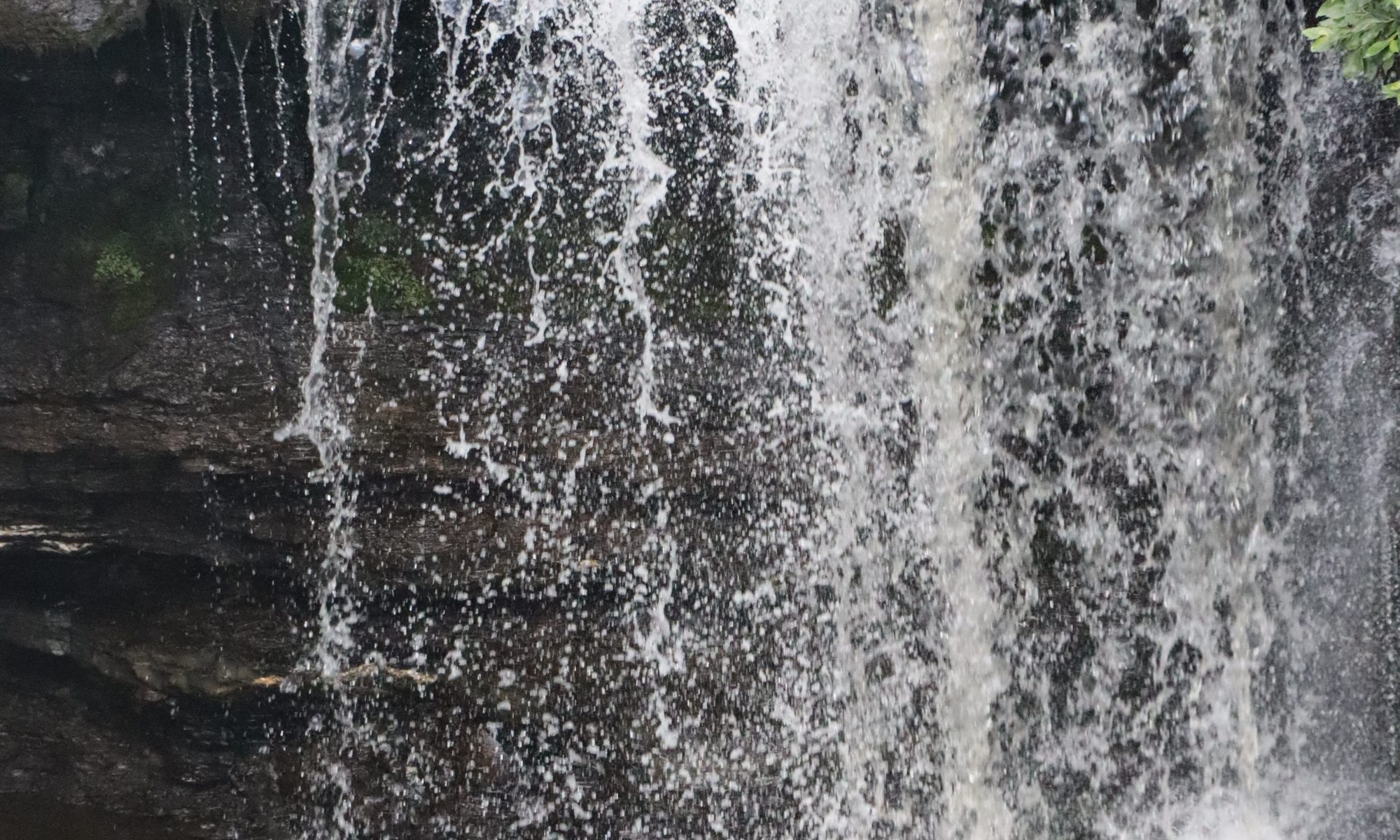 It’s only taken me 13 years to stop at the car park for Lealt Falls and take a look. It was fairly early (before seven) and I had to it myself (except for whoever was in the tent bigger than their car that was tucked around the corner from the main car park). I’d met up with someone in Portree at six to deliver a commissioned painting, and decided to drive home ‘the long way’ as it would be quiet.

What also caught my eye were the patterns in the clouds above the Trotternish Ridge, with patches of blue and sunlight. I can’t decide whether my favourite photo is the one with the ‘bump’ in the ridgeline or where it’s smooth like the clouds.

A bit further north, the light breaking through the clouds over the bay at Staffin compelled me to stop again.

Before Lealt Falls, I also stopped for a few snaps of the Storr and loch.

And what would a trip around the north end be without at least one sheep photo?This lamb’s striped socks caught my eye. 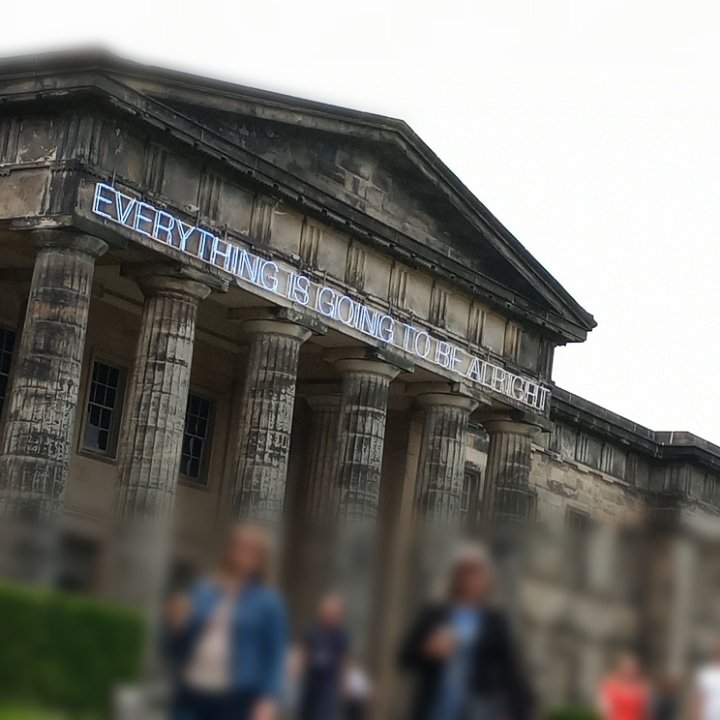 A chance to visit a small exhibition of Joan Eardley‘s paintings and catch up with friends, how could I resist? 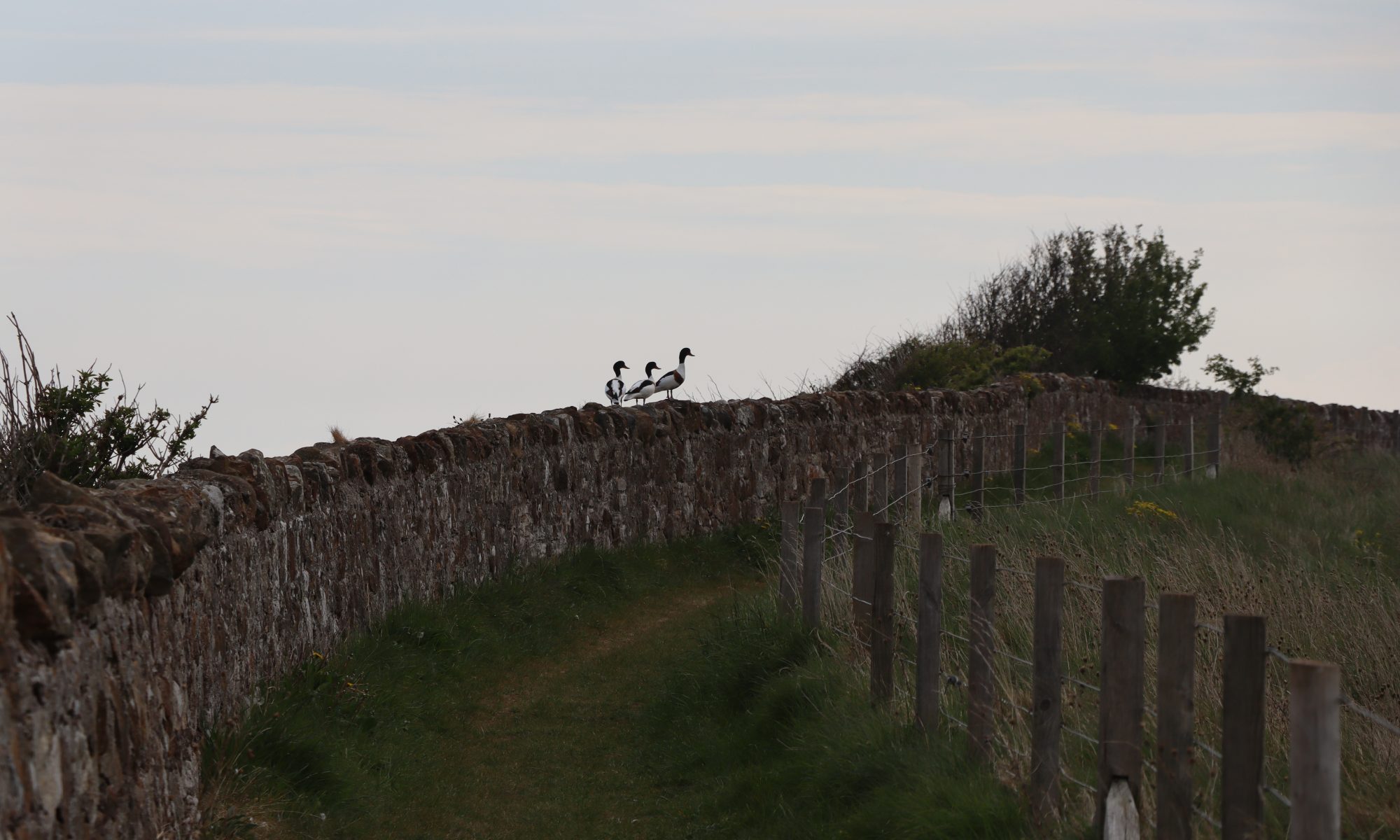 Sometimes real life feels like I’m walking through a metaphor. In this instance, about getting my ducks in a row.

Try as I might, there’s invariably a duck that’s not co-operating.

But occasionally it does happen…

And just as I think I have, the moment passes.

I saw these ducks (shelducks) at Skateraw, a little south of Dunbar in the Scottish Borders, last week, along with oystercatchers, a heron, and a skylark.

Here’s a quick look around Skateraw, with some of the birdsong, and wind (video link). 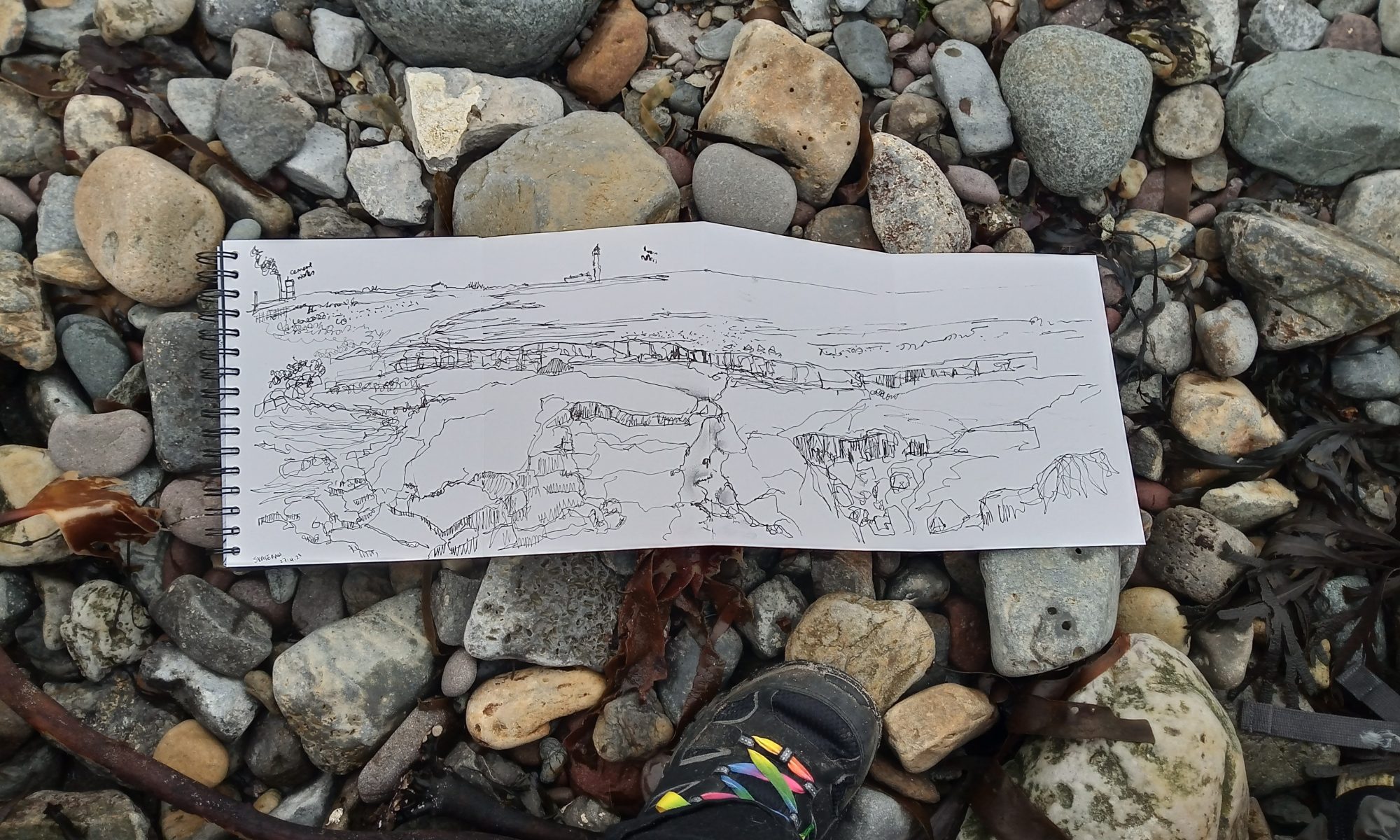 I’m in the Scottish Borders for a few days, and have been looking forward to seeing the rock slabs at Skateraw on a really low tide. My two painting friends weren’t entirely convinced by the joys of plein-air painting in a nippy wind off the North Sea, but I have been looking forward to this for weeks so was determined to get out my oil paints and tucked myself in behind a rock shelf.

This is as far as I got with my oil painting before I gave up because I was too cold, and walked over to the other side of the headland which was more sheltered from the wind. There’s an enticing layered bit with a tumble of rocks beneath.

And a bit further to the right the concrete rectangles of a nuclear power station. The brutal lines of this building have a beauty of a very different kind to me.

I have also done two ink sketches in my new Octopus sketchbook, which has fold-out pages, adding colour later in the warmth of indoors. 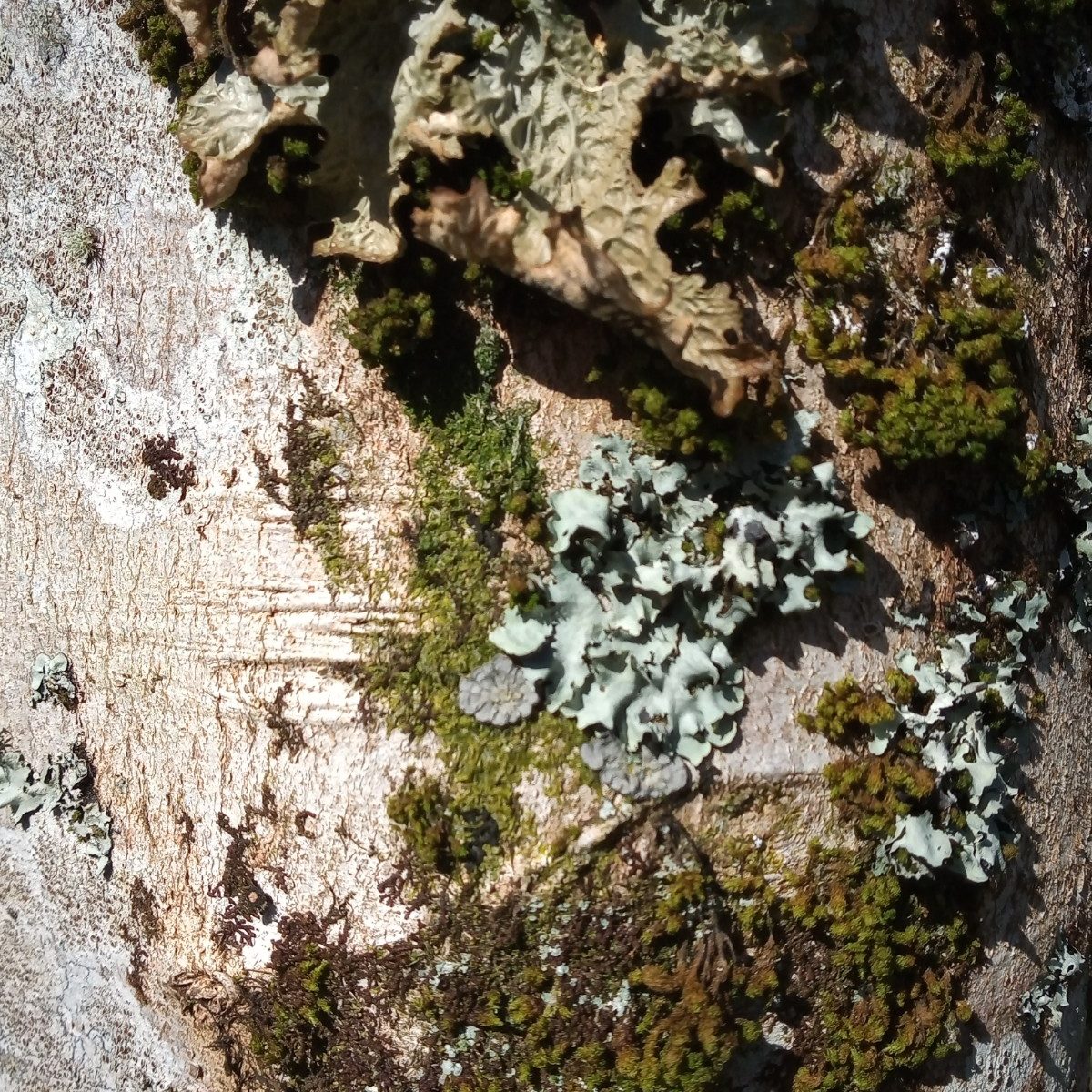 <cue: Teddy Bear’s picnic music>
If you go down to the woods today, beneath the trees where nobody sees, hide and seek as long as you please, ’cause that’s the way you slow down and really begin to see the colours and textures on individual trees.

One of the things I love about the Uig woodland in early spring is that the undergrowth hasn’t regrown yet, so it’s easy to step up to trees away from the path. Yesterday I found myself focusing on the colours and textures of tree trunks.