Someone asking “how long did that take to paint?” often leads me into talking about contemplation time, when I’m not actively standing brush in hand but am thinking about a painting. Both require “brain-space”, being able to focus without too many stray thoughts jabbing in. It also requires freshness, space to breathe (metaphorically and literally). It can become mind-numbing if you forget to include “excitement” and “challenge” in the ingredients. You think you’re doing it to the same standard but more likely there’s a little slippage each time until you’re a self-disappointing distance from where you think you are.

I see it in my small sheep paintings, the ones I try to paint when I “need” more flock members compared to the ones when I “want” more flock members. They end up sitting about in a huddle on a shelf until I feel my fingers itch to paint little sheep again because then they’ll be that measure of “better” that satisfies me. That’s why, at times, my flock of little sheep paintings becomes quite small (this photo was taken of what’s at Skyeworks Gallery on Monday): 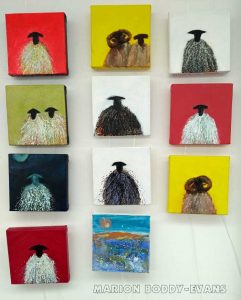 Over the spring/summer I painted a handful with a full moon (and that idea came from a commission for a large painting that was to include the moon). I enjoyed working dark-to-light and will probably do some more (perhaps Harvest Moon, given the time of year): 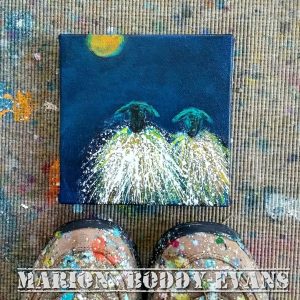 The last little sheep to come off my easel was about three weeks ago and will feature on this year’s Christmas card (no, you can’t see a photo yet) and the one waiting patiently that’s the closest to being finished has got glitter on it (just because I felt like it), not that you can really see it in the photo. 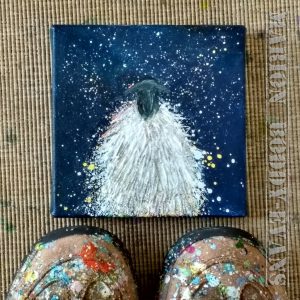 I’m heading into my studio this morning feeling like painting little sheep again. But last week I was in Edinburgh painting figures on one of Alan McGowan‘s workshops. No drippy paint, no splashes, all controlled layers and glazes. A creative break, recharge, boost, shift of gears and all those other mantras. I thoroughly enjoyed myself, learnt new things and re-established other knowledge, and now have headspace and the desire to paint some new little flock members. A change of pace back to something familiar, but now different again because I’ve had a break.

PS: The last time I did one of Alan’s inspiring workshops, it resulted in a tree painting dominated by ultramarine, a colour I almost never use. See North Shore.