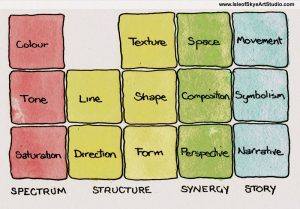 The Elements of Art are a form of creative alchemy, for many an almost mythic philosophy which allows the expert to see into the inner workings of the creative process, the grammar of the atelier, or the structure of critique. Alchemy developed as scientists discovered the properties of chemical elements, and this knowledge was conveniently placed into a Periodic Table, to help others predict, innovate and discover. Similarly, the alchemy of art can be revealed through its elements, giving the artist a strong foundation for innovation and interpretation.

The Elements of Art are split into four sections: Spectrum, Structure, Synergy, and Story.

Spectrum is all about light and colour: the building blocks of any piece of painting. Colour is a wide ranging term. When thinking about creating or critiquing art we generally divide it up into three parts: Hue, Tone and Saturation.

Hue is what most people mean when they talk of colour. It is, effectively, the name we give the pigment, or mix of pigments. Obviously we can’t just refer to ‘red’, ‘green’, ‘yellow’ and ‘blue’. We know from experience that there are a myriad of different colours, sorry hues, out there. Artists have created a code that makes these recognisable. So, for example, we have sky blue, sap green, etc. Some of these names come from the appearance of colour in nature, some, like cadmium red, come form the minerals the pigment is obtained. When an artist thinks about their choice of colour, hue is the first stop. Hue sets a colour in nature, it gives us a recognisable foundation on which to base interpretation of a painting. We know the sky is blue, the grass is green. This is our first instinctive response to an image. (Note that by choosing to paint the sky green, the artist can swiftly move the audience out of their comfort zone. These things are not fixed.)

Tone, also known as Value, is the lightness or darkness of the colour. After recognising hue, we then interpret tone. Tone is on the periphery (where it plays a much more important part in the eye) and helps us identify movement in nature. Tone is a more primal, emotional trigger; the hunter rather than the gatherer. A good tonal range makes a painting open and inviting. A small tonal range means the eye and mind must work more to interpret what it sees — things can be hidden in plain sight, identifiable only through the variance in hue.

Saturation, also known Chroma, is a measure of the intensity of the colour. A highly saturated colour is bright, almost glowing within its hue. A poorly saturated colour is muted, more pallor than colour. Artist quality paint has a greater intensity than student paint due to the smaller proportion of binder or filler included in the mix. A quality painting, using artist level paint is by its very nature more inviting, it dazzles where the student quality paint merely illuminates. But artists can vary the saturation of a colour by adding neutral grey of an identical tone to the mix, dulling the image and evoking a calmer, more muted emotional response. The lack of saturation may be by intent rather than economy.

Having collected our building blocks through colour, we now begin to assemble the painting. We create a framework for the art, we generate a structure within which the art is born. There are five elements to structure: Line, Direction, Texture, Shape and Form.

Line, typically a mark longer than it is wide, made by brush or pencil, gives outline and defines boundaries. It is the first pathway through the painting, it pulls the eye and is used to delineate objects.

Direction takes line and applies it across the canvas. It can be vertical, horizontal, diagonal, straight or curved. It gives the one-dimensionality of line its purpose and creates a map from numerous pathways, a spider’s web of possibilities.

Texture is an appeal to an alternative visual sense, the tingle you feel in your fingertips as your eye works its way across the image. A taste in your mouth. Texture can give life to an otherwise dull painting; it can expand the mystery and sense of discovery as the light changes across the surface, it gives and takes according to your viewpoint. Texture can be used to emphasis the line and direction of a painting, or provide a subtle alternative, a sub-plot or buried treasure.

Shape is the creation of two dimensions in the painting. We readily identify several shapes, the square, rectangle, triangle, circle and ellipse. Shapes are flat, and they provide a surface which reflects the world. If lines are letters, then shapes are words. They speak to us individually and in groups.

Form is the creation of three dimensions in the painting. Spheres, cylinders, boxes, pyramids, etc. But form is an illusion, presented on a two dimensional plane. It is therefore part of the trickery of the artist. We are persuading the audience to interpret the image before them, and make assumptions.

Section III: Synergy
The framework of the painting is complete, now we give it life. Synergy beings together all that we have created and allows it to grow beyond its basic components. Part illusion, part psychology, and a little bit of magic. Synergy has three main aspects: Space, Composition and Perspective.

Space, or more fully, positive and negative space, is the relationship between objects (defined by lines and shape and form) in the painting. The biggest mistake artists make is to concentrate only on the positive space, the objects which define the painting. Negative space gives the connection between objects — if the negative space is greater than the positive then objects are distant to each other. If spaces are enclosed, they cleanly define objects, if they are open, they allow a flow from one object to another. Space can also be defined by hard and soft edges, which in turn can define the essential idea of the painting, giving importance to a particular aspect of an object. Space is particularly important in abstract painting, where there is little to ground you in the reality of nature.

Perspective is the application of science to art. It is the way we represent three dimensional reality on a two dimensional plane. It comes to us from centuries of observation by artists long dead, who used various tools from the simple picture plane to the sophisticated camera obscura to achieve a good representation of how we view the real world through two eyes. And in the process, science becomes magic.

Section IV: Story
An artist creates to share their vision of the world with the audience. The major part of that is the story. This is the way the painting continues to invoke passion and interest after the initial viewing. There are three aspects to story: movement, symbolism and narrative.

Movement is the way the artist gets us to travel through the painting. A result of line, shape and form, coupled with composition. Western eyes tend to travel from left to right and from top to bottom. The artist needs to persuade the audience to follow a more complex path through the painting, revealing treasures and ideas as the journey continues. An ideal painting will offer a choice of routes, giving the viewer something new to discover when they return to the art work in the future.

Symbolism connects the artist through culture of the audience. It is the notion of a hidden language, of secrets to be discovered, and further level of engagement with the painting. (If you want to investigate the use of symbolism further, take time to look at and research old masters such as Holbein.)

Lastly, there is Narrative. This is the combination of all that has gone before, mulched together to provide the essence of the artistic experience. The ‘why’ of the painting. Through the narrative the artist gives the audience a gift. They can take all that the artist has created and personalise it. The narrative is more than a simple telling of a tale, it is a conversation between two minds. Through it the painting develops a meaning for the viewer which is unique to them, because it reflects their experience of life.

The Elements of Art allow us to investigate and interpret the process of artistic creation. They should be used both during the act of painting and whilst viewing art created by others. An understanding of the elements should allow an artist to develop their abilities and expand their horizons.

2 Replies to “Creative Alchemy: The Elements of Art”