Day three of of Alan McGowan?s ?Life Drawing into Life Painting? workshop saw us start with three 10-minute charcoal drawings, then onto limited palette painting with oils and an afternoon-long session. 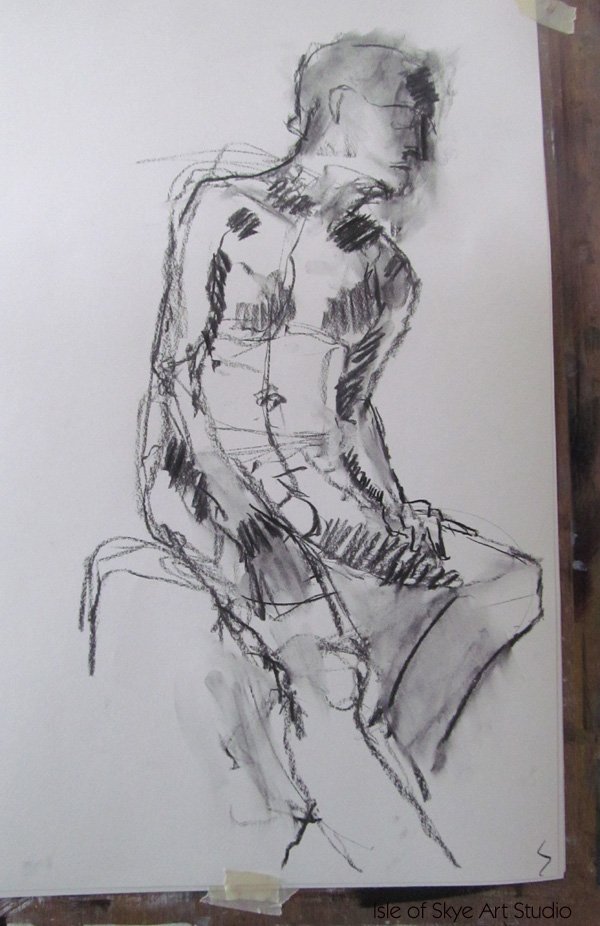 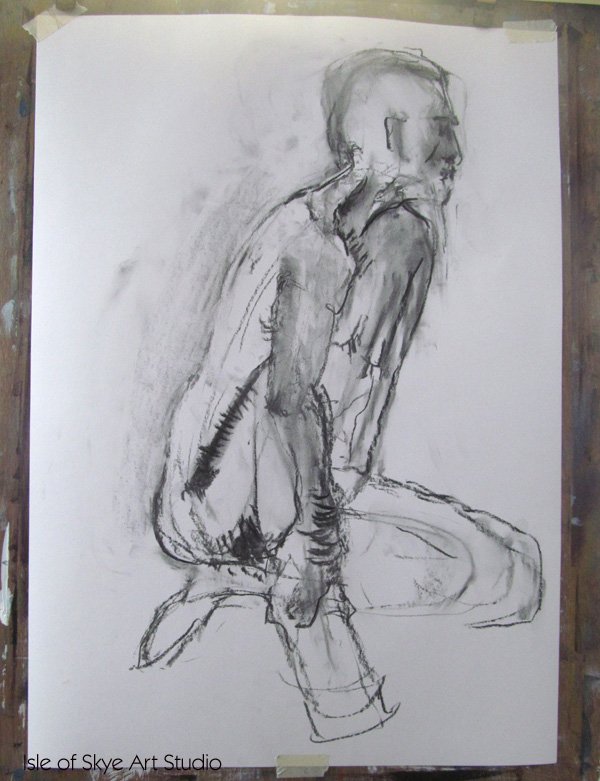 Next up was painting with oil, using a limited palette of muted primaries: burnt sienna (“red”), golden ochre (“yellow”), and Payne’s grey (“blue”). Alan emphasized doing the initial drawing (with brush) in neutral colours, so that it didn’t overwhelm subsequent blocked in colour. Part of this painting was getting familiar with working with oils: getting consistency right (not too thick too early and not too thin), mixing even colours (no stray, unmixed bits), planning ahead for working wet on wet. Given my landscape painting involves fluid paint, encouraging paint to run, and I often work with only a single colour at a time (to eliminate the problem of acrylic drying on a palette), I found myself hesitating and second guessing. By the time the model took a break, I was still stuck in “muted colours” and the only light in the painting was the cloth against the chair. But I felt I’d learnt a lot by identifying some things I do habitually in my studio painting that I might do differently (on occasion, if not always).

With model Michael back in the pose, it was time to explore the possibilities of these colours, mixed clean rather than muted. At one point Alan demonstrated on the eyes/nose/chin what he meant by laying in the darks first, then cutting in with lights over this; I preserved this bit of painting, other than adding the light blue highlight as suggested, extending the nose a little and adding a bit of Michael’s beard, telling myself it was because there was more than enough else to be done within the time. Final change was to narrow the width of the head by adding background colour.

After lunch we started with oils on the long-pose painting, for which we’d done the initial drawing using acrylic yesterday. It doesn’t particularly look like it, but lot of time spent thinking “warm/cool” with the colour mixing. Looking at painting during model’s last break, I realized the angle of the shin didn’t relate to the bent knee; work-in-progress photos reveal how long I’d missed seeing it. Ended with realizing the forehead needed to be bigger, shifting the eyes/nose/chin down, so I put in darks ready for continuing tomorrow afternoon. Overall, a tremendously rewarding and satisfying day.

Notes to myself:
• Think planes, changes in direction. Use for brushstrokes.
• It’s not a coloured-in drawing; apply deliberate brushstrokes where colour/tone occurs, working across whole composition all the time.
• Judge which surface is flat and which has the change of direction; shadow is on this. It may be the part in front e.g. bent leg against a torso.
• Put down darkest tones before light. Exaggerate/overemphasise somewhat, then carve into this with light. Reads far better than dark over light.
• Using a muted primary palette means you’re already part of the way there with skintones, gives a faster in to painting, rather than having to mute-down primaries.
• Include width of head vs width of torso in cross-checks.
• At end of painting session that will continue, leave it somewhere specific so know what you’ll start with next time.
• All parts of the painting must be contributing, even if not yet resolved.

2 Replies to “At the End of Day 3: Life Drawing into Painting Workshop”