Day five of Alan McGowan‘s “Life Drawing into Life Painting” workshop saw us start with four five-minute poses, followed by three 10-minute poses, an hour pose, and the long afternoon pose. We were free to choose which medium/technique we wanted to use and what we worked on. I put acrylic onto A2 cartridge paper to use with graphite, solvent and titanium white, something I really enjoyed when we tried it on the first day.

I did all four of the five-minute poses on one sheet; it eliminates the need to change paper and as I suspected model Michael shifted from one pose to the next without a break. Tricky part is composition, as you’ve no idea what the poses may be.

It’s amazing how much longer 10 minutes feel at the end of week’s focused life painting than at the beginning. 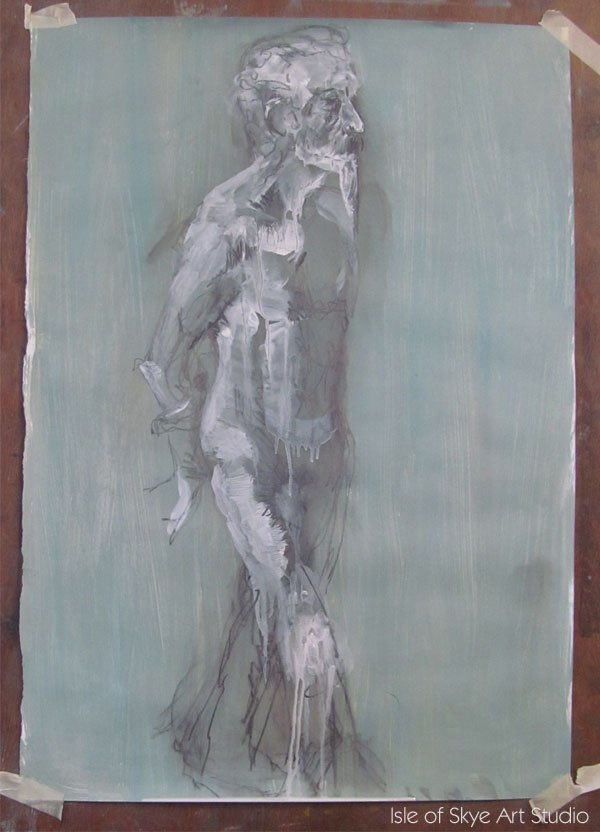 After these, an hour-long pose with a break after 30 minutes. I wanted to move away from the desaturated colours I’d been using in the long afternoon pose. Parts work for me, others not, but I was left feeling that with more time I would indeed have resolved more. 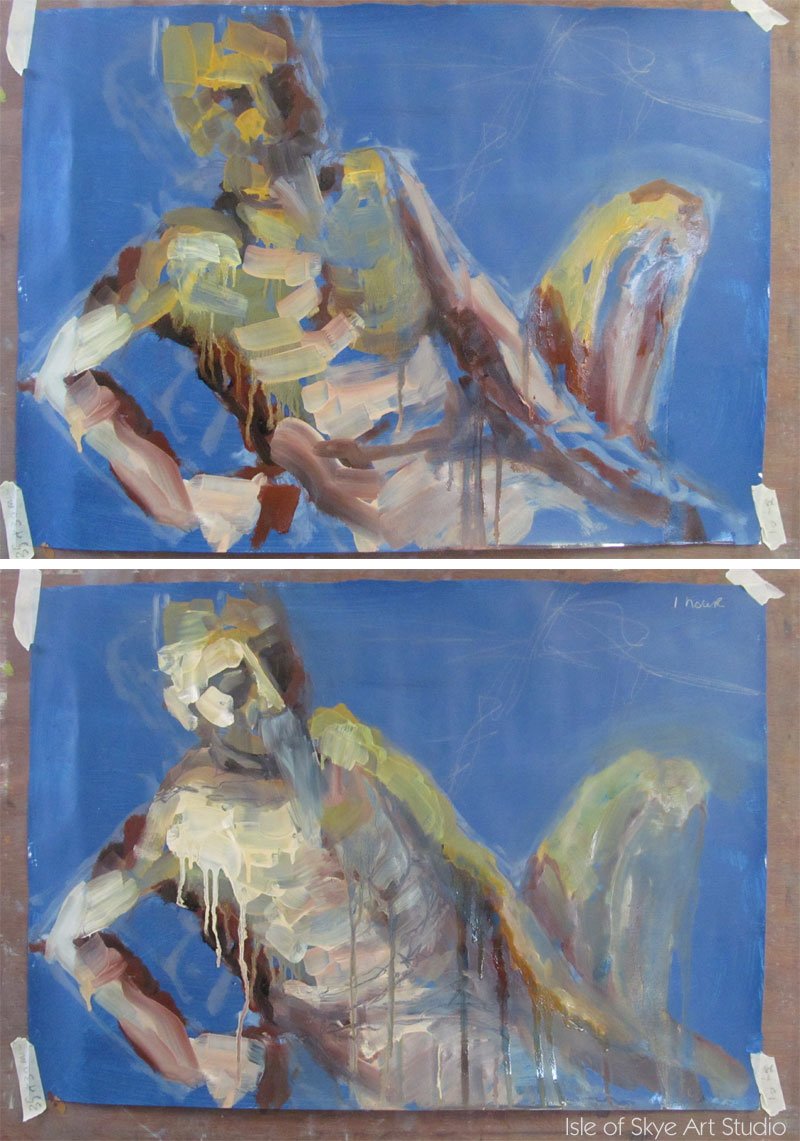 In the afternoon, I wanted to try another, again with more saturated colours, rather than continuing my long-pose painting from the previous afternoons. Not that I consider it finished, but I felt I could learn more by painting something else, trying things that painting wasn’t. Alan resolved the eye (middle photo), showing me (again) how to carve out the sense of the deep socket the eye sits in, the planes around the eye, nose and chin. Ever so helpful being able to watch it develop stroke by stroke, colour by colour. Another valuable thing he reminded me about was the light on the two anatomical landmarks on the arm, which help a lot in the sense of form changing direction in space. The joy of life painting: it’s all in front of you, it’s merely (!) looking and decisive placing of a brushstroke.

Notes to myself:
— Colour and tonal changes on planes.
— Eye sits deep in socket.
— Watch distance to farside brow.
— Drips can be problematic if running from face. Especially watch out for drip from end of nose.
— Instead of trying to paint thin tonal change on nose, paint broad and then cut back in with background.
— With a relatively dark ground, if left exposed it’ll read as an edge.

Related:
At the End of Day 1, Day 2, Day 3, Day 4
What I Found Walking Along the Seashore at Gardenstown
Wirework: Memories of a Walk on Gardenstown Beach
Lost Your Marbles?
Photos: In Gardenstown (afternoon before art workshop)
Photos: Walking on the Beach at Gardenstown

2 Replies to “At the End of Day 5: Life Drawing into Painting Workshop”