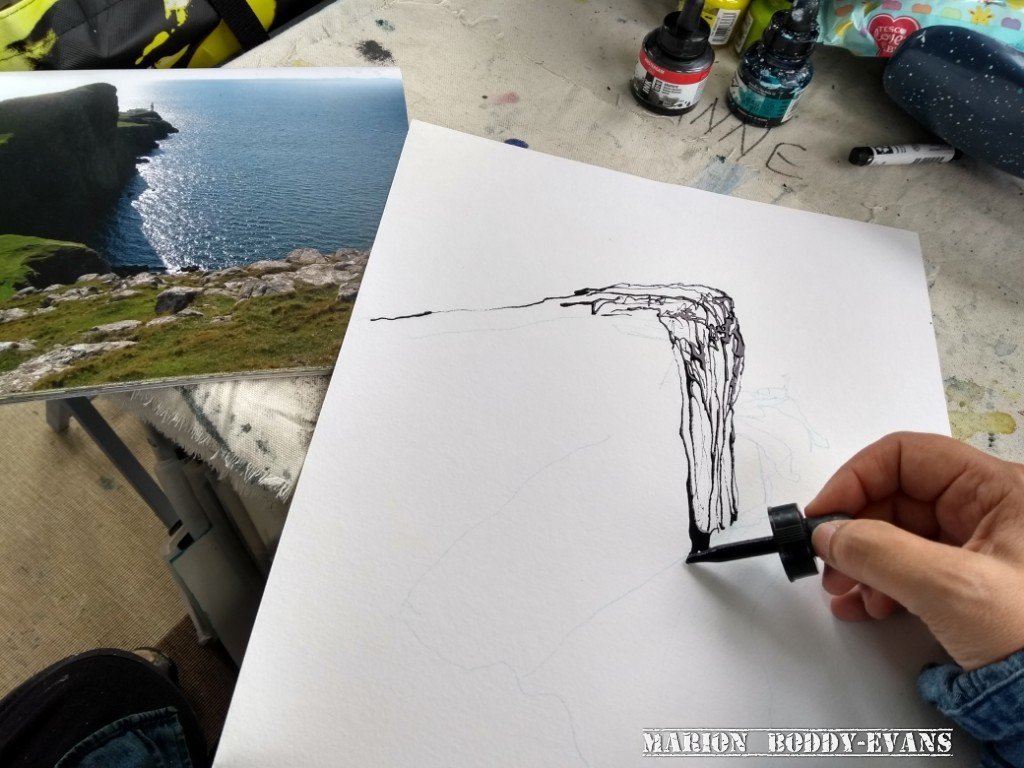 Is it a drawing, is it a painting? Did it start as a drawing and become a painting when I added water to the ink? I don’t know, and don’t believe it matters. What’s of more interest to me was that this afternoon, after days of exploring new watercolour colours, I felt like using “black” ink only. Maybe it was a side effect of a grey-skies day. 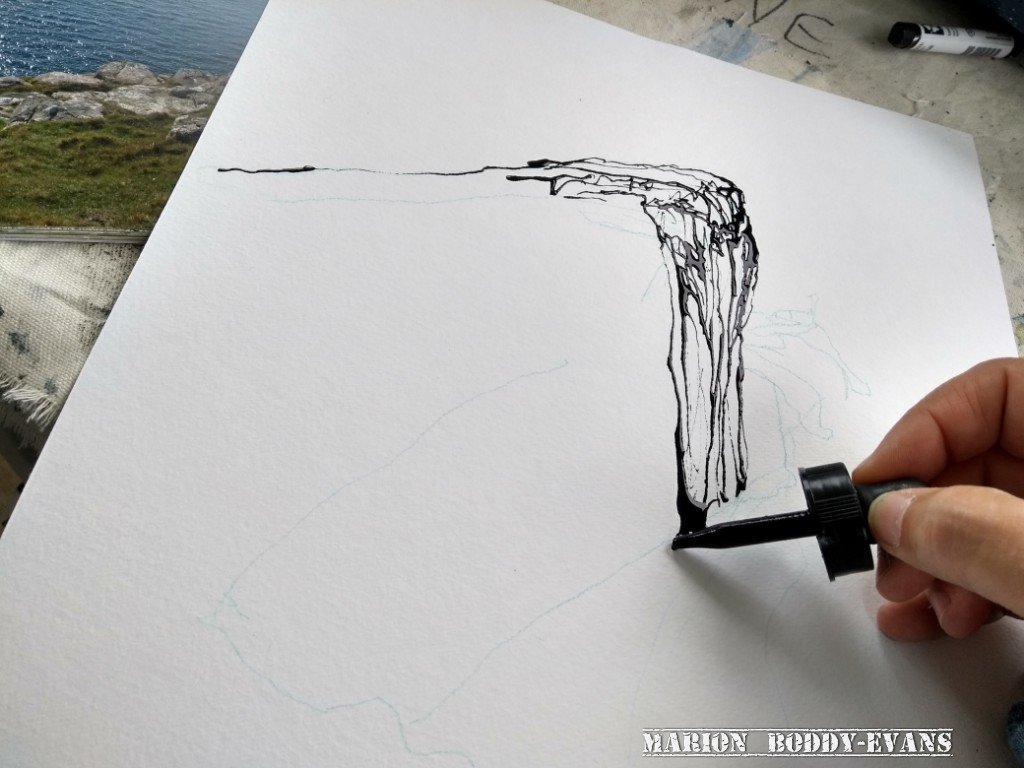 It’s not black though, it’s Payne’s grey*, a dark blue-grey that I find has got more rich depth than straight black.

The subject is Neist Point, the westerly most point of Skye, punctuated with a lighthouse. I was working from memory with one of my reference photos (in the booklet of photos I use for my workshops) to hand to remind me of shapes. I’m using acrylic ink, and the dropper as a drawing tool.

You can’t easily make it out in the photo but there are some composition lines I drew using a non-photo blue pencil before picking up the ink. It meant I could concentrate on getting the ink drawing done fast enough that some would still be wet enough to spread into the sea area when I dampened this. (If I were to do composition and ink simultaneously, it would split my attention and lengthen the drawing time.) 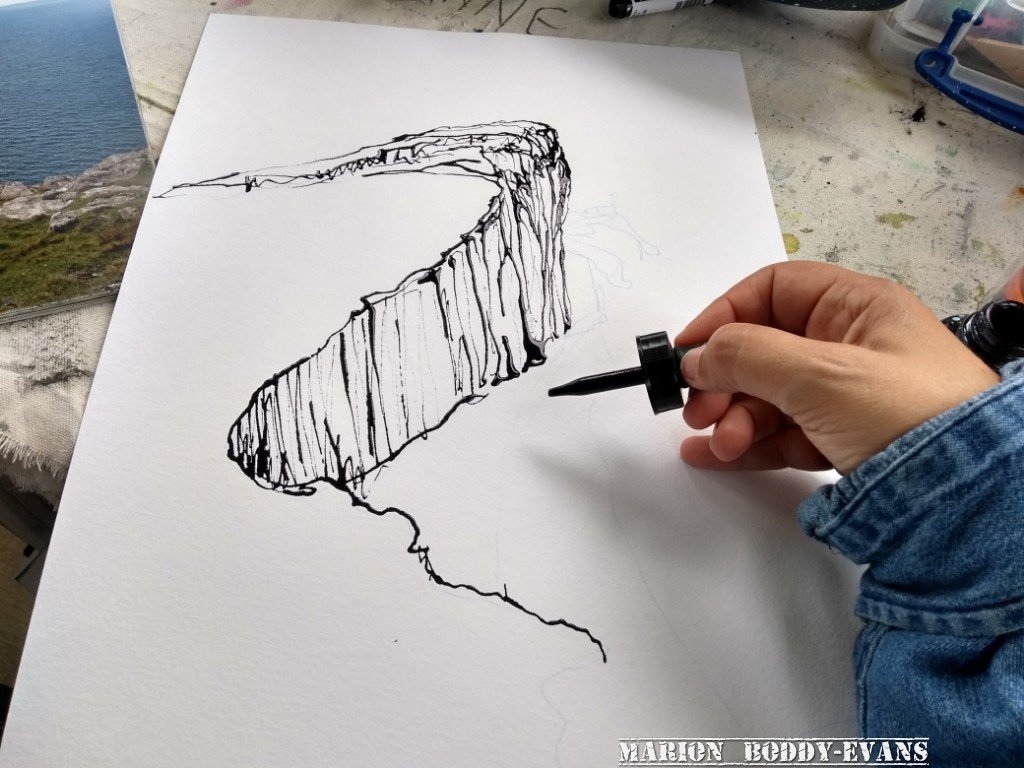 Line only at this stage, on dry paper (350gsm Not watercolour paper). 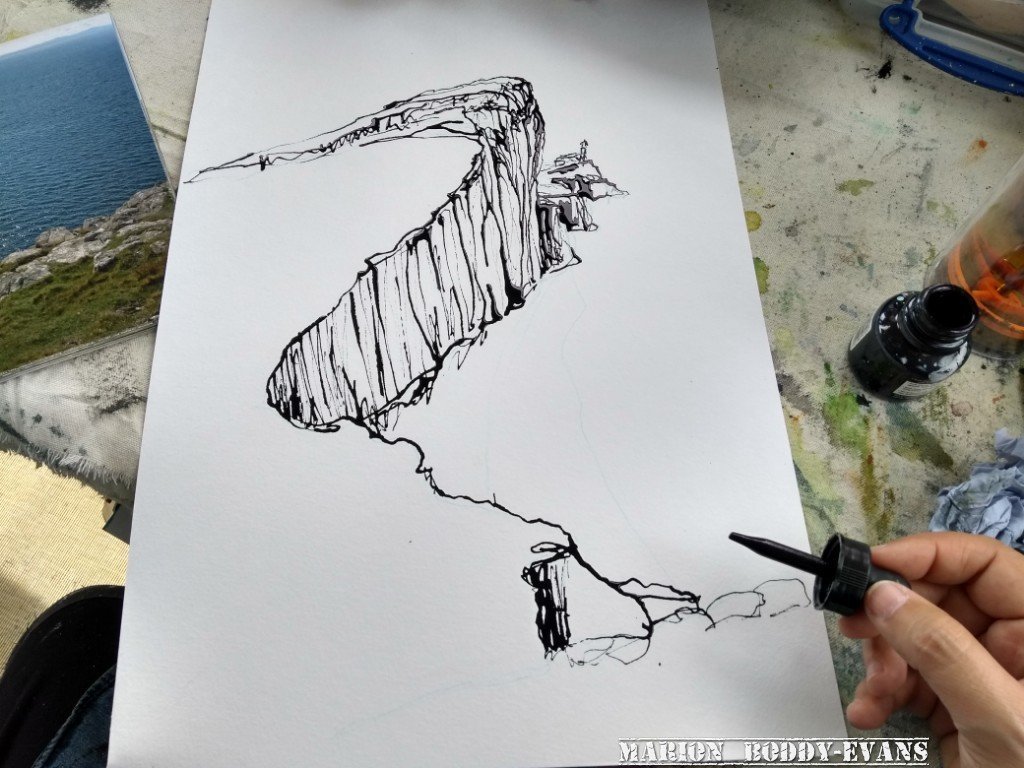 And here’s where I got so caught up in what I was doing that I forgot to take photos. So between the previous photo and the next the caption reads “Draw the rest of the #@&%! owl”** 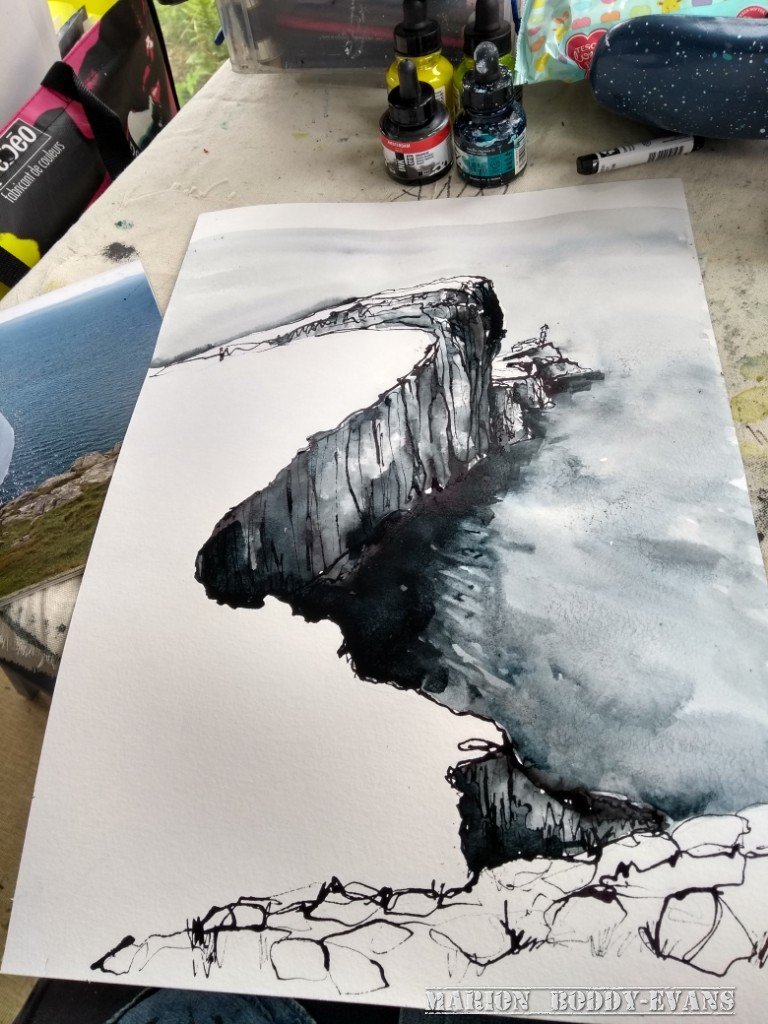 Once I’d worked my way down to the foreground (it’s a cliff edge from which you can see the lighthouse), I made my way back across the drawing with line a little. Then I wet the sea area with clean water, taking care not to touch any of the ink yet.

I needed the sea area to all be damp so I wouldn’t get any hard dry edges (except on the horizon) when I started spreading the ink into the sea. I then carefully ran a damp brush along the edge of the ink line to connect it to the damp paper. Areas of still-wet ink spread out, and I brushed it outwards too.

Where there wasn’t enough ink, I used the brush to ‘borrow’ some from other areas. Where there was too much, I dabbed at it with paper towel. Brush wiped and dunked in clean water periodically too. At full strength this ink colour is very dark; thinned it’s a beautiful blue-grey.

I could add colour, such as the greens of the grass, but I won’t. That’s a different painting.

*Payne’s Grey is named after a British watercolourist and art lecturer, William Payne (1760–1830), who recommended the mixture to students as a more subtle alternative to a gray mixed from black and white. Payne’s grey originally was “a mixture of lake, raw sienna and indigo” according to “Artist’s Pigments: c.1600-1835” (by RD Harley, Archetype Publications, 2001, page 163). What’s in it these days varies between manufacturers, typically a blue and a black together, sometimes a touch of red is added.

**A meme from a few years ago on how to draw an owl in two steps, the first being two circles and the second a detailed owl drawing.

2 Replies to “Drawing (Neist Point) with One Ink Colour”