I’ve had quite a few questions about how I created the painting on my Interlude exhibition poster, “Symphony in White”, so here are a few photos I took while working on it. As so often happens, I don’t have any step-by-step photos of the later stages where it all comes together as I was too caught up in the painting and pondering. Fundamentally, it’s a combination of deliberate and happy accident, letting paint run and colours to mix, as well as leaving it to dry before applying another layer, all the while referring to the idea in my head.

I’d worked out the composition idea and started with a minimal pencil drawing on the 100x100cm canvas. I painted the negative space (pthalo turquoise, I think) and then added texture paste to where the flower heads would be. 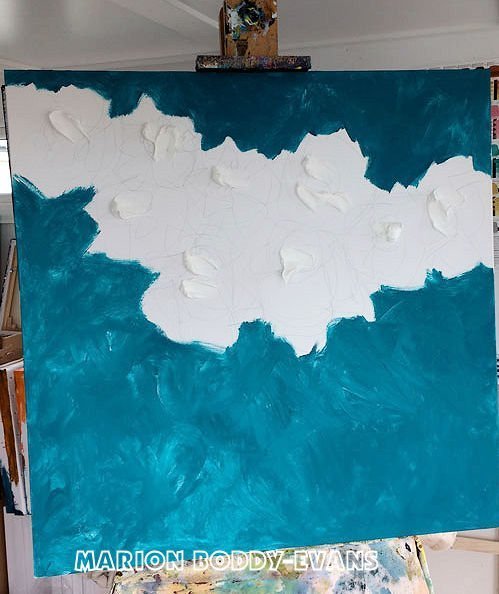 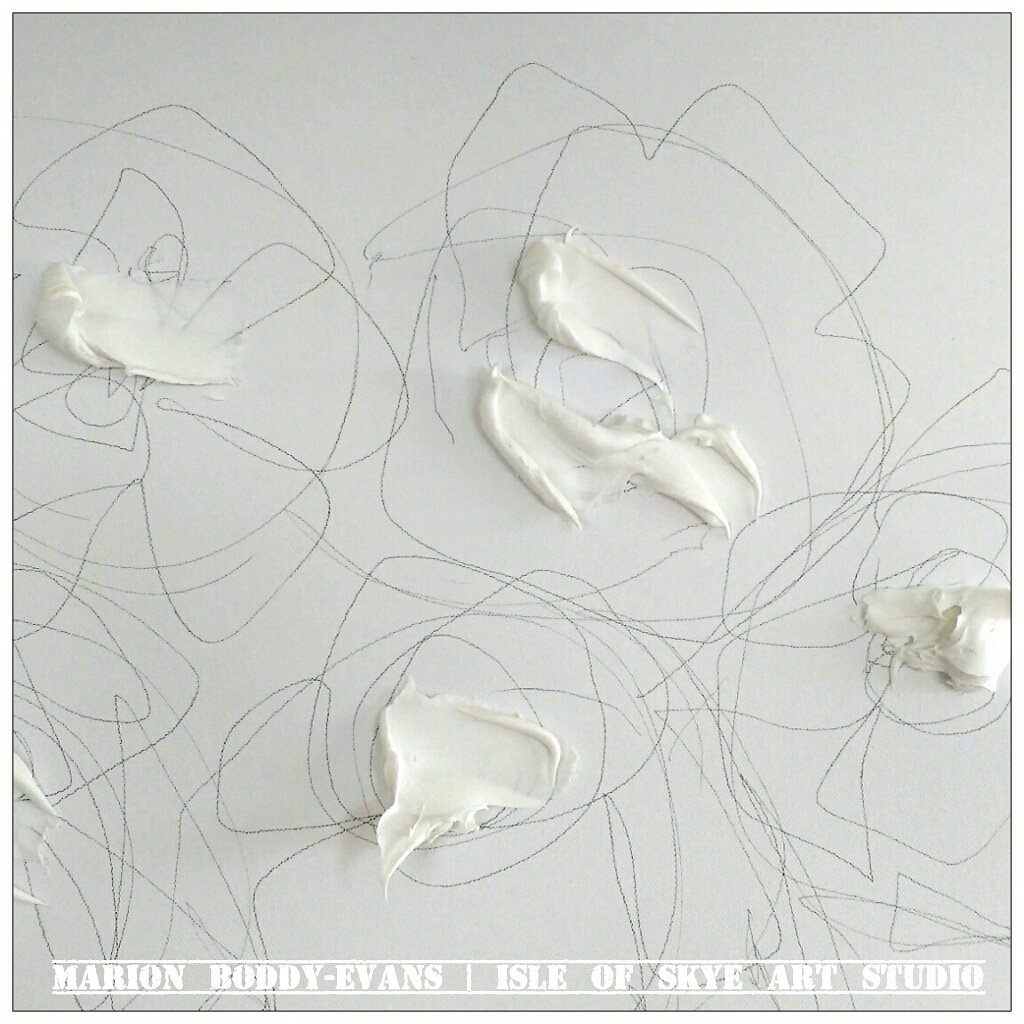 I then spread it with a big brush, a little colour added to differentiate the flowers. I can’t remember what colours I used, but it looks to me as if I added some magenta top left, then used the colour that was still on the brush to do the other magenta-ish flowers, then added some yellow which has mixed to give green-ish and orange-ish. The specific colours don’t matter at this stage, it’s all about the texture. 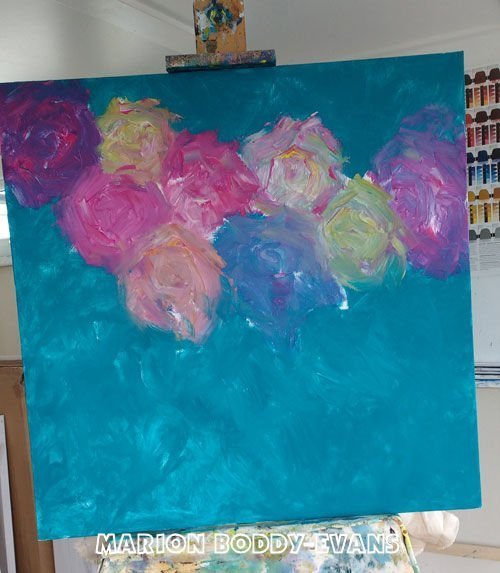 This was then left to dry overnight, to ensure the texture paste was definitely dry. More blue was added, and some magenta to some of the roses, and the painting sprayed with water to allow the colours to run. 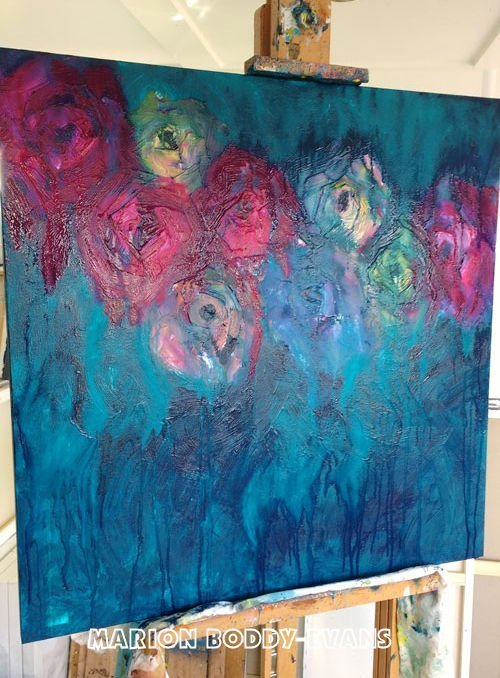 Before this was dry, I added some yellow and let it drip. 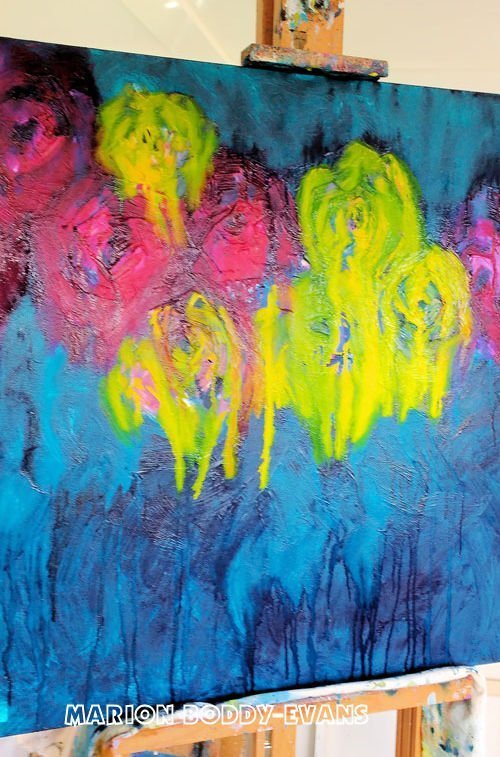 And then a layer of titanium white. 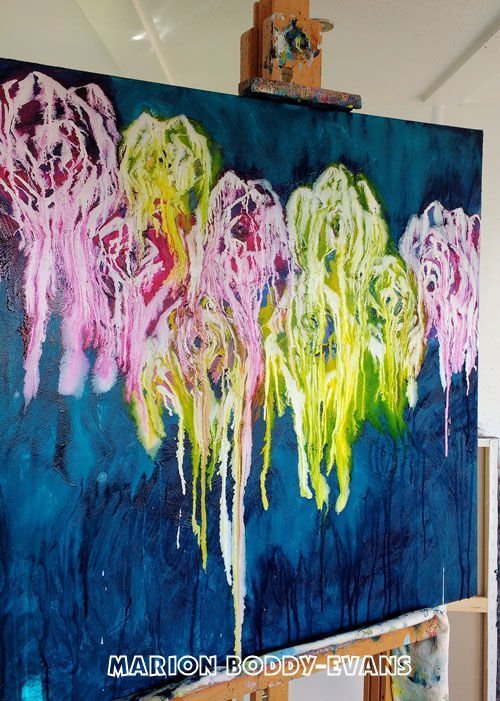 The paint I’m using is Golden High Flow which is about the consistency of ink, but with a different viscosity so behaves differently, and an high pigment loading (artspeak for seriously intense colour). The texture paste (Golden Light Molding paste) creates an absorbent surface. When I spray the paint with water it does interesting things. Having the canvas vertical uses gravity to encourage the paint to flow. You’ll also notice there’s a piece of fabric (raw canvas) to catch the drips; there’s more on the floor.

And this is where I run out of step-by-step photos. But there was more spraying of water, more colour, more white, more spraying, more waiting for paint to dry or partially dry (you can see there’s some white that’s run that has not mixed into still-wet paint), some? colour from the flowers added subtly into the top negative space, and eventually left to definitely dry. Then adding of tube titanium white with a brush and palette knife to give definition to the roses, some thick and some thinned with glazing medium, and some lifted off to reveal colour beneath (such as centres of flowers). And more pondering and more tweaking, and ultimately arriving at this as the finished painting. How long did it take? I don’t know, just as I don’t exactly know how I got the painting from as it was in the photo above to as it is in the photo below. I only have a rough idea of the journey to get there, and had a lot of enjoyment doing it.

6 Replies to “How I Created “Symphony in White””