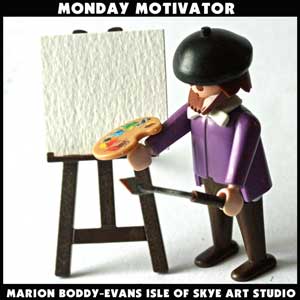 “…in the painting I let my own head, in the sense of idea or imagination, work, which isn’t so much the case with studies, where no creative process may take place, but where one obtains food for one’s imagination from reality so that it becomes right.

“… I also read a conversation that he [Delacroix] had with other painters about the making, that is the creation, of a painting.

He asserted that one made the best paintings — from memory. By heart! he said.”

Paint studies on location, sketch, sit and look, make notes of what caught your attention, what you actually see rather than what you know is there, build up memories to tap into later.

Use reference photos only to check a specific detail, as you use a dictionary to check the spelling or meaning of a word. Don’t let a photograph dictate what you include; you’re painting not trying to be a camera. You’re a being with emotions, preferences, experiences, and by filtering what you see through these you create more interesting paintings, art that is uniquely yours.