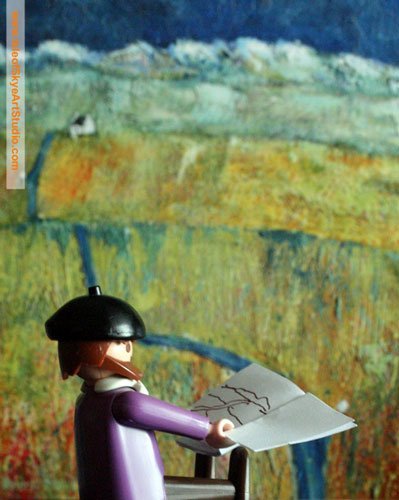 [The paintings] “deliberately invite viewers to slow their pace and to look closely …meaning is assembled from an unstable but fertile mixture of chance and memory”
— Ernst Vegelin van Claerbergen, Head of The Courtauld Gallery

“Johns seems open to unexpected encounter, and in turn his art often provokes us to unexpected ways of seeing, thinking and feeling. …? Johns has always tried not to have intentions that act as a driving force of his art. Instead he simply begins and carries on working until something happens.”
— Barnaby Wright, curator

Jasper Johns’ Regrets series developed from a chance encounter he had with a reproduction in a Christie’s auction catalogue of a photo of a young Lucian Freud sitting on a bed in the Francis Bacon’s studio. I chanced upon the exhibition when at the Courtauld Gallery in London to see the Egon Schiele exhibition (more on that later this week). Like most people, I initially merely glanced at the Regrets paintings as I walked through the room where they were, intent on getting to Schiele, but am glad I did come back for a closer, slower look.

There are layers of meaning and symbolism that can be unpacked, on “themes of creativity, memory, reflection and mortality”, which the Courtauld catalogue (and I presume the MoMA catalogue) explains. About how in his process of exploring and transforming the photo in numerous experiments using oil, watercolour, pencil and ink he mirrored and doubled the original image, and in doing so, the form of a skull emerged in the centre of his new composition. This ?apparition? creates a reminder of death or memento mori at the heart of the works.

But I only found that out afterwards when I read the catalogue. What fascinated me was how the photo guided my interpretation of abstract paintings which, without this reference or anchor in reality, I probably wouldn’t have spent as much time look at. My favourite was an ink painting on plastic paper, and impact of this on the mark making which has ‘dissolved’ lines, spread shapes with soft edges. It was mesmerizing, my eyes moving from one shape to another, feeling the hand of the artist and the happy accident of the paper, getting lost in the pattern while simultaneously overlaying the photo in my mind, engaging imagination and intellect in that special way that painting does.

Support my endeavours from £2/$2 month through Patreon