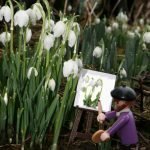 “Something happens in between when we’re children and when we hit about middle school that things start to kind of, you know, solidify or petrify in a way.

“And I think that’s a good word ‘petrify’ because it means to harden, but it also means you get scared all of a sudden. It’s like something happens where the world becomes less about asking questions and discovering and just getting the right answer.

“… if you keep drawing in your life, that means that you constantly have to look at things and you have to really look at them in order to be able to draw them. And simply in the act of looking very closely at the world, these questions arise.”

— Austin Klein, transcript of interview with
EntreLeadership 5 May 2015

And if you’re too petrified to draw, what then? Well, do it anyway. There is no easy way to face the fear, so stop procrastinating by waiting for it.

Create a safe space to do it in. Non-judgemental, no harsh critical opinions, including from yourself. You gets points for the act of drawing, not the results, at this stage. The results are irrelevant, something separate. It’s about actually drawing rather than sitting petrified of the idea for fear of doing it wrong or being bad at it.