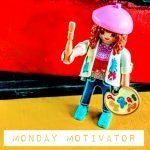 “Figure out what you want to commit to doing ahead of time. When it comes time to do it, your brain will start using that classic addict’s tactic of bargaining. Don’t let it negotiate. You decided already, no questioning that decision. Just do it. Let yourself revisit that decision later, after you’ve done it and when you’re in a place to decide, not when you’re facing discomfort and wanting to get out of it.”

Leo Babauta, Zen Habits, Oh, the Rationalizations Your Brain Will Dream Up!”

Facing that “why did I think this was a good idea” moment when all I want to do is run away screaming silently, lasting through it, and coming out the other side more often than not pleasantly surprised that what had originally prompted me was right after all.

Such as my standing in for an artist friend who’d volunteered to do stone painting with kids at a charity stand at a big local summer event but then had a family emergency. I’d watched her Facebook post where she’d asked but no-one was offering (several people who might have were already doing something) and in the end I messaged her to offer. I didn’t tell anyone beforehand other than the in-house art critic so friends didn’t turn up just to see the unprecedented scene of me and a bunch of kids (or to find that anxiety had won and I’d left already).

As it turned out, it was an inspiring day. The kids who wanted to do the activity preselected themselves as interested in painting, and I persuaded most of their accompanying adults to have a go too. The latter’s joy in reconnecting with painting and making was infectious. I suspect many a set of acrylic paint markers were bought soon thereafter.