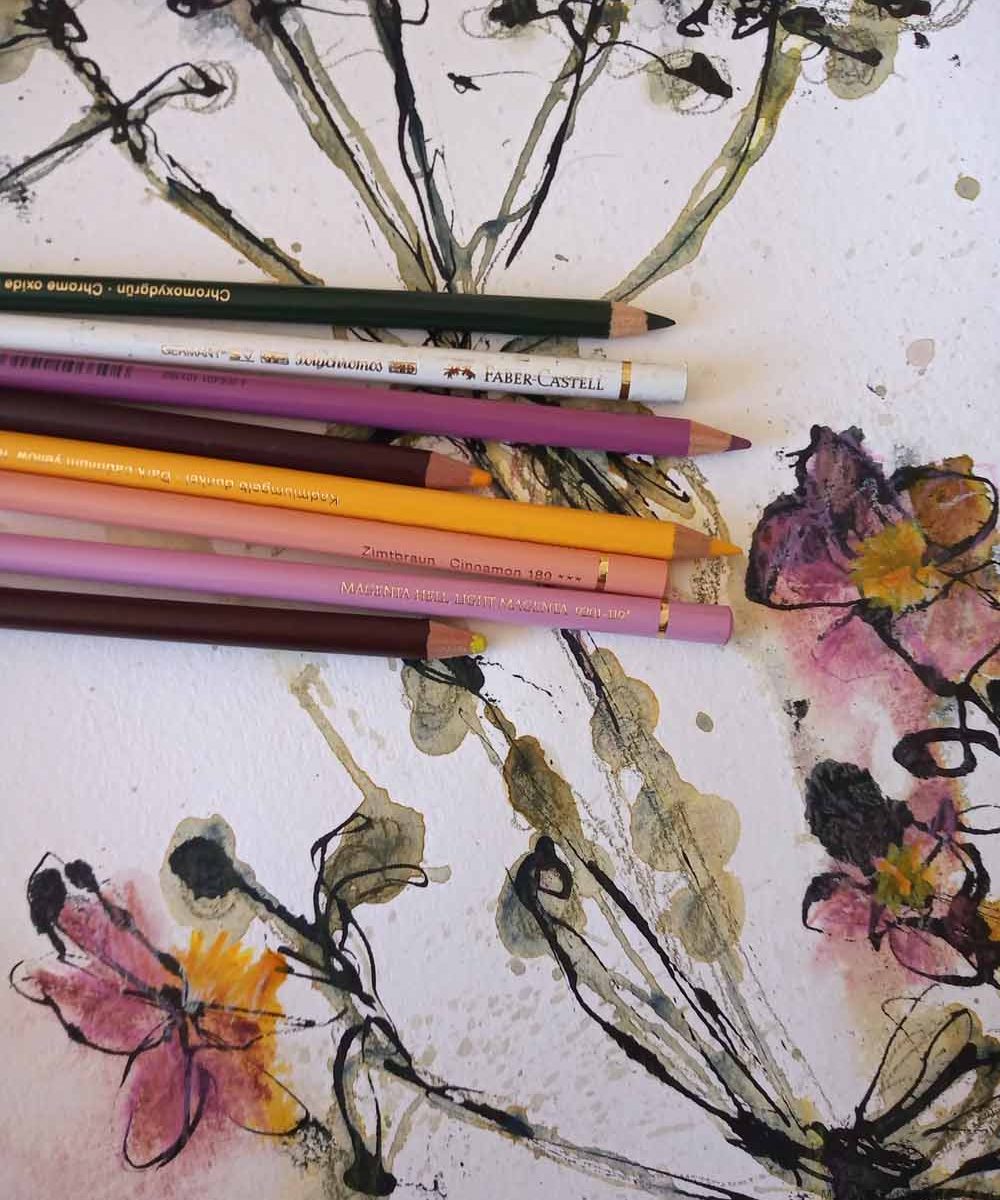 I’ve had my first go at painting the flower the in-house art critic and I have dubbed “The Alien” for its tentacles that stretch out and flowers that stare at you. At the end of the tantacles are spheres, like closed parts of a carnivorous plant. It’s some sort of Japanese anenome (I haven’t delved into the plant identification app to find out exactly what) that’s a beautiful Potter’s pink (PR233). When lit by the sun from behind parts are quite silvery.

Potter’s pink dates back to English watercolor painting of the 18th and 19th centuries, and is also used in ceramics. It’s an earthy, muted pink, not a bright Barbie pink. It granulates magnificently but is also a reticent pigment so is easily to over-dilute with water and be insipid. Don’t be put off it: Artist Liz Steel calls it her secret weapon. For me it was love at first encounter.

I started by wetting areas where I wanted to place the flowers. I didn’t do any preliminary sketches or drawings or planning beyond thinking I wanted there to be a good amount of negative space (’empty’ white) and the flowers to be towards the right. Why the latter I’m not sure, but it could be so you’ve got to travel across the painting a bit before you encounter them, assuming you’re looking from left to right in line with reading in the West. I have a bottle of Potter’s pink in my collection of homemade fluid watercolours, so it was easy to drop in colour before the paper had dried.

I know it doesn’t look like much at this stage, just some random shapes of colour, but it was what I was after. Next I reached for my bottle of Undersea Green, a Daniel Smith watercolour that’s separates into green to brown as it dries. Using the pipette, I drew in stems and leaves.

I wanted a bit of strong dark, so got out my watercolour set and mixed up some perylene green. I touched the corner of my flat brush into the still-wet Undersea Green, letting it spread as it desired. I dropped some gamboge yellow into where I thought the centre of the flowers would be, then some lemon yellow to create a bit of variation, and put it aside to dry.

I did another painting following the same recipe, then one where I started with Payne’s grey ink. I drew out the whole composition using the ink’s pipette, left it dry for a little in the sun, then lifted off the excess ink with some paper towel.

I sprayed water onto the areas of the flowers, then dropped in some Potter’s pink and encouraged it to spread with my finger (saves having to wash a brush). You can see some of the acrylic ink did spread, as I thought it would; if it’s newly touch-dry it usually will.

I added Undersea Green as in the previous versions, then yellows, and left it to dry.

These are the three paintings drying in the sunshine. Fortunately the studio cats weren’t about to walk over them.

Once they were mostly dry, I retreated to the coolness of indoors to add some coloured pencil for another layer of mark making, to sharpen some edges, hopefully making the overall result more engaging (but there’s always the risk of overworking it).

These are where the paintings ended up. I can’t pick a favourite; I like things about all of them.