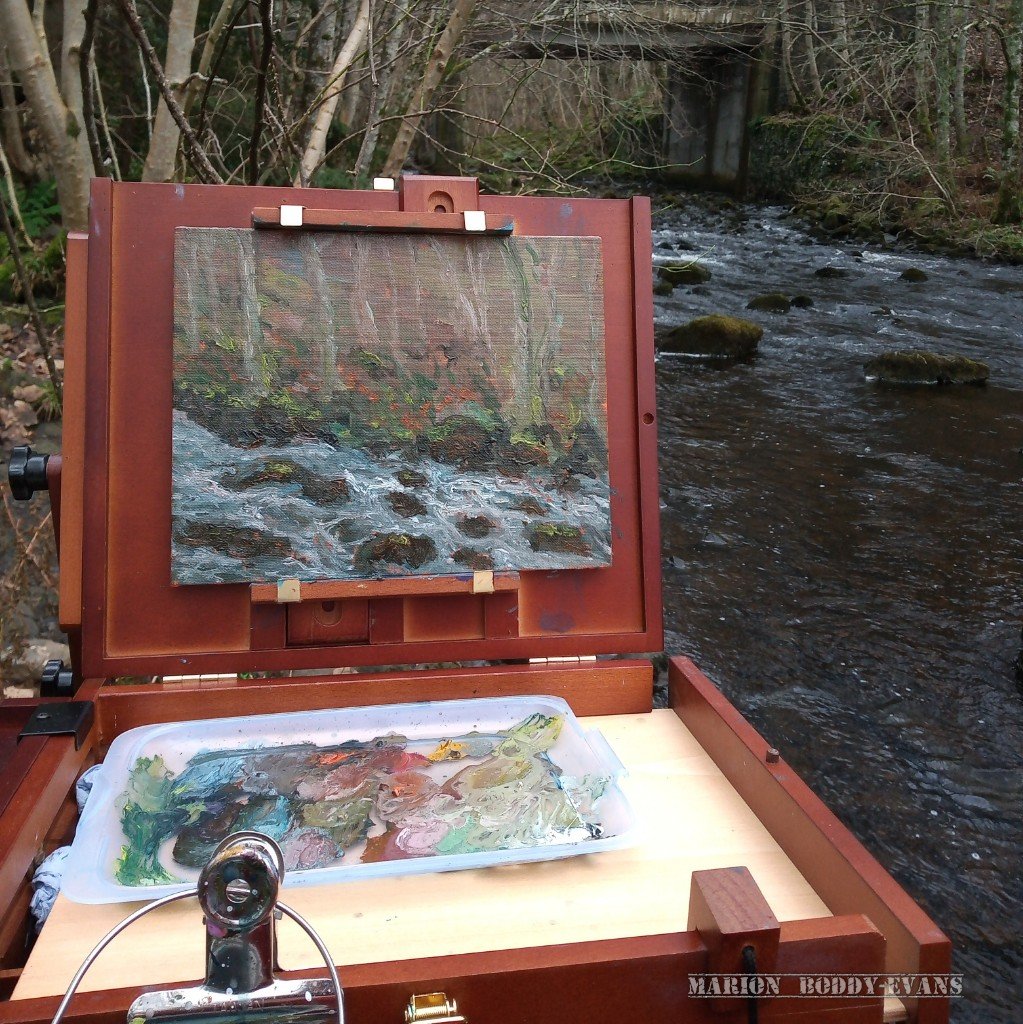 Painting on location in a part of the world where the weather forecast is often “changeable” and “occasional showers” has meant I have, at times, had Nature add to a painting. Unfortunately, with watercolour or ink it’s invariably not a “happy accident” result. More like a “washed that off” result.

I’ve been thinking more and more about having a go with oil paint on location as rain won’t have an impact, and being outside means solvent won’t be a problem. It still leaves keeping wet paintings out of reach of the ever-inquisitive studio cat Ghost while they dry, but that isn’t unsurmountable with small paintings.

Cue the arrival of my first pochade box a few weeks ago, one with space for keeping two wet paintings safe as I stumble along a rocky shore. After a week of staring at it, I tried it out in the safety of my studio, then a few days later ventured out. This is me grinning like the Cheshire cat after putting the very first bit of oil paint on a panel (with orange acrylic for a coloured ground).

Bit further along on that first painting, when the sun came out and changed all the colours.

The point at which I stopped. Not too shabby for a first anxious attempt, I thought. Size 8×10 inches.

My second attempt with it was in the Uig woodland. I’d hoped the Little Tree That Could would still have some autumn colour on it, but it didn’t. I’ve also painted at the Rha waterfall, and at Camus Mor a few more times, enjoying myself immensely, albeit with mixed results. (And, no, I won’t be sharing photos of the dire ones! Just think “overmixed muddy colours”.)

This is the painting I like best, so far. It’s 30x30cm on wood panel primed with clear gesso (rather than white).

Using a shallow plastic container for a palette has contained the paint and made cleanup easy, the lidded metal container for solvent hasn’t leaked, I’m nowhere as anxious about it all, I haven’t dropped a painting, and Ghost hasn’t walked over a still-wet painting, yet.

8 Replies to “My First Steps with Plein-Air Oils”