Yesterday I painted the edges on some of the paintings that will be in my solo exhibition opening at Skyeworks on the 30th March. I started with the darkest edges, straight-from-the-tube Prussian blue, then mixed up various lighter blues and grey-blues, depending on the subject. It’s frustrating to mix an edge colour and then run out before you’ve finished all four sides, so I wasn’t surprised that I ended up with some left over. I dug out a blank canvas with the thought that I’d use the leftovers as a coloured ground for some future Minch seascape. 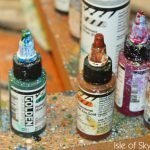 My easel being occupied with two paintings dangling on it so their edges could dry, I put the new canvas on the floor. I spread the leftover blue on the canvas, creating a horizon line and working down, then dipped the brush in water to get more paint out of it before washing it. I used a knife to scrape down the palette and spread these last bits of paint on the canvas. Then my brain started saying: “This is rather a lovely blue”, “Those are rather lovely brushmarks”, “What would happen if you used some of those fluid colours that are standing around the base of your easel just to the right?” And before I knew it, I was working wet-on-wet with an array of colours.

It’s unusual for me to work flat because invariably a studio cat comes along to investigate. Sure enough, a curious white face appeared, and had to be dissuaded from walking on the canvas. That done, he tried sitting on my shoulders to watch what was going on. Finally he encouraged to rather be elsewhere, and I looked again at what I’d done. I liked it, could see various ways to develop it, and knew I should resist fiddling. This photo shows what it looked like this morning when it had all dried.

This photo shows where it was this afternoon, with the sky reworked and a few tweaks made to the sea and foreground. It’s a lot more abstract that my other recent paintings, and the style different, without the long drips of paint because it was created flat. There’s much I’m enjoying about it, and am intrigued to hear what other people think (so do post a comment below!)

Here’s a detail from the painting; if you click on the photo you’ll get a larger version, about actual size.

9 Replies to “Painting in Progress: Going with the Flow”