On Saturday at the ‘creation tables’ at the back of Skyeworks, I experimented with placing a piece of wool onto the canvas to restrict the spread of High Flow acrylics. I put it in places where I’d have drawn a line if I were working in pencil, for instance the top of a ridge or divide between sea and land.

Why wool and not string? No reason other than Skyeworks’ box of crafting bits contains wool not string. I also put masking tape around the edge of the canvas to create a “dam”, so the paint wouldn’t pour off the side if the canvas wasn’t flat. (Note to self: double-check it is stuck all the way around!)

The wool did constrain the paint as I’d hoped, allowing a little colour seepage if the canvas is kept flat, and more if tilted but not as much as if it wasn’t there. Where the wool is the paint dries speckled, as some is absorbed, which adds interesting texture. Bottom right photo shows the result; this was the first canvas I worked on and the paint was just about dry (it being cold, the acrylic dries slowly). The other three I managed to leave to dry thoroughly; it’s a tremendous temptation to tweak and fiddle and? peak under the wool. Top right has some coarse sea salt on it; same idea as with watercolour, that some of the paint will be absorbed to leave interest effects. Bottom? left I used gloss medium along with the paint, and it’s spread differently.

What happens next with these will depend on how I feel about them until I see them again (I left them at Skyeworks) when they’re dry. Might like the result totally, might work a layer or two over the top, might do a lot. I won’t know, which is part of the fun. 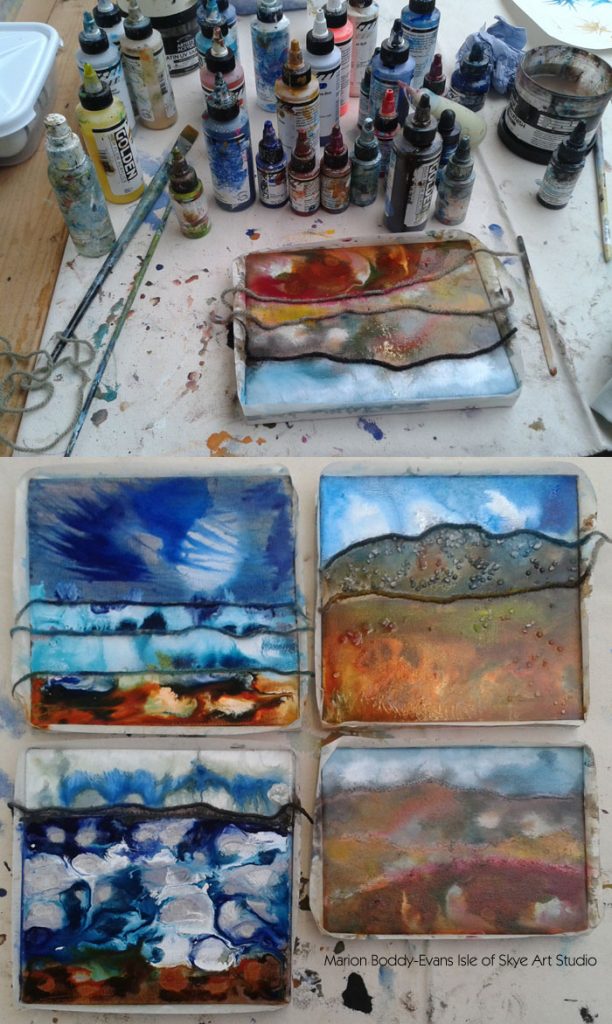