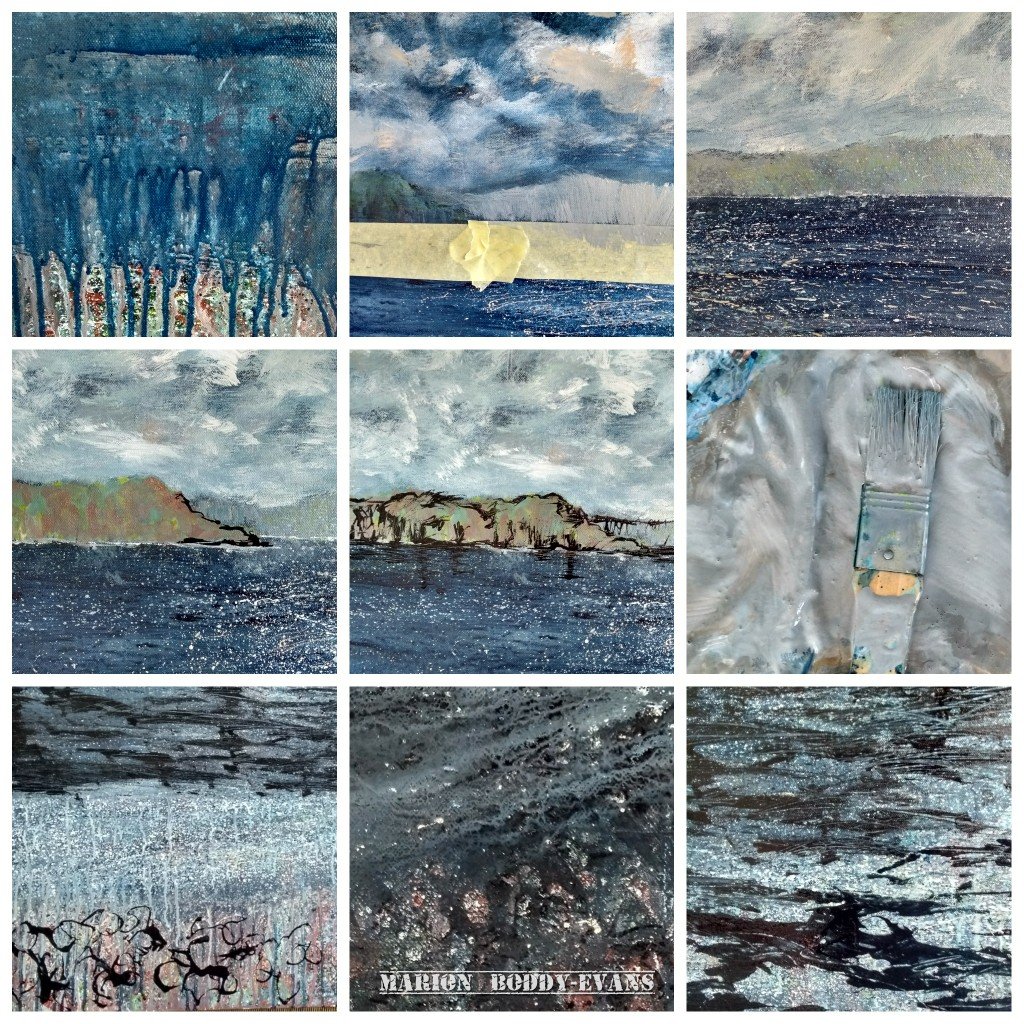 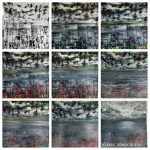 Following on from Part 1.

Back into my studio, taking a fresh look at this painting, I felt it was, overall, too muted and midtone and bland and had lost all the vitality it’d had in its earlier stages.

First thought was to shift some of the grey towards blue, so out came my favourite problem-solving blue, Prussian, which I glazed over the sea and dabbed around into the sky. I used glazing medium as well as water to thin the paint, letting it drip towards the bottom. 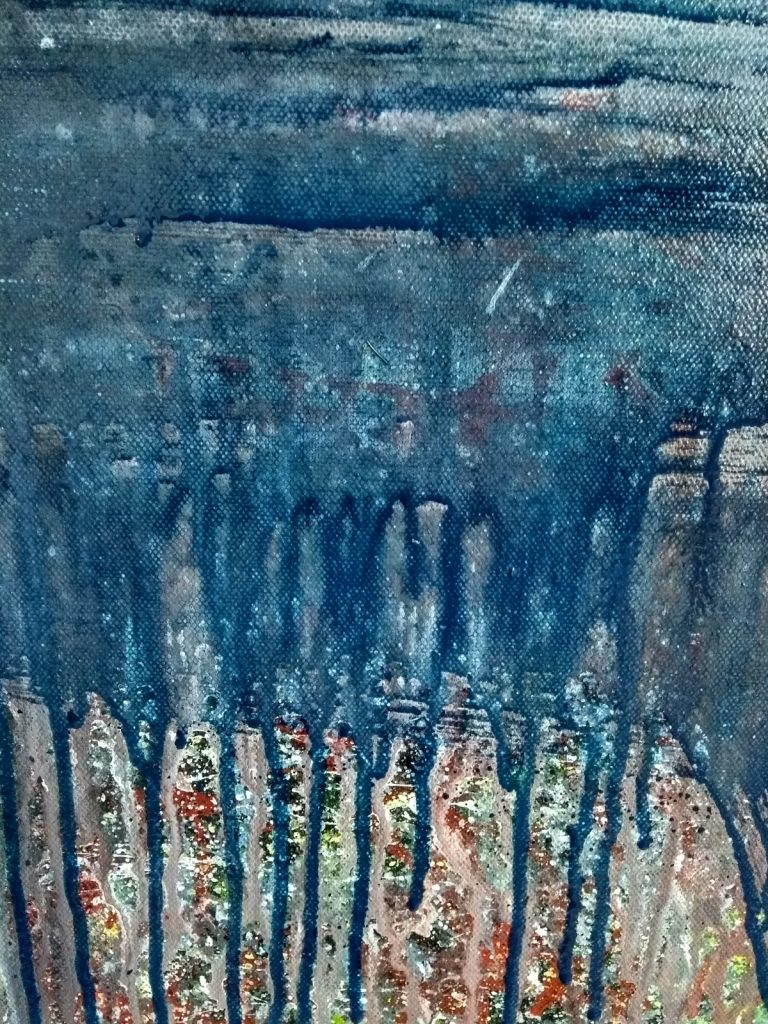 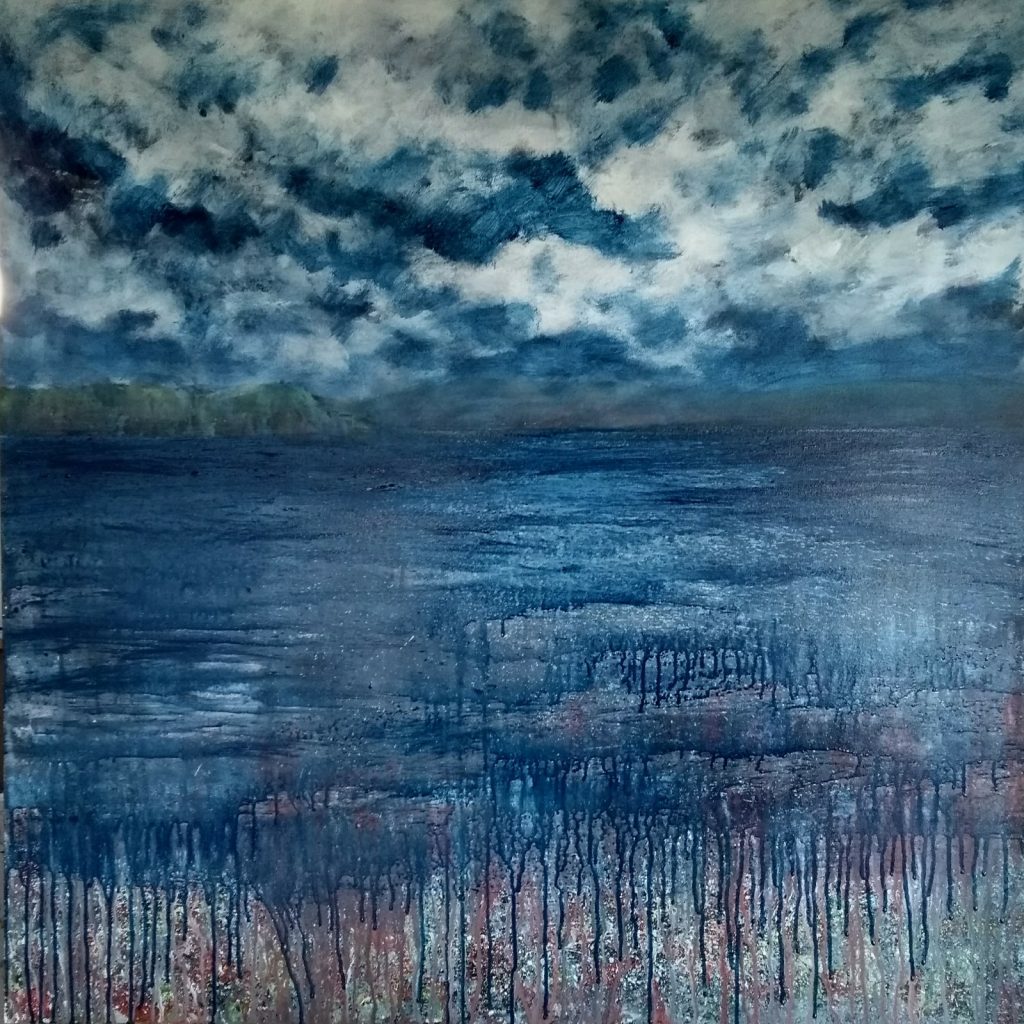 This of course eliminated the highlights on the sea, so out came some cadmium orange (mixed with titanium white using my blue-not-entirely-cleaned-from-it? brush to subdue the orange a little). Added to sea and clouds, knowing it’ll have additional layers over it. 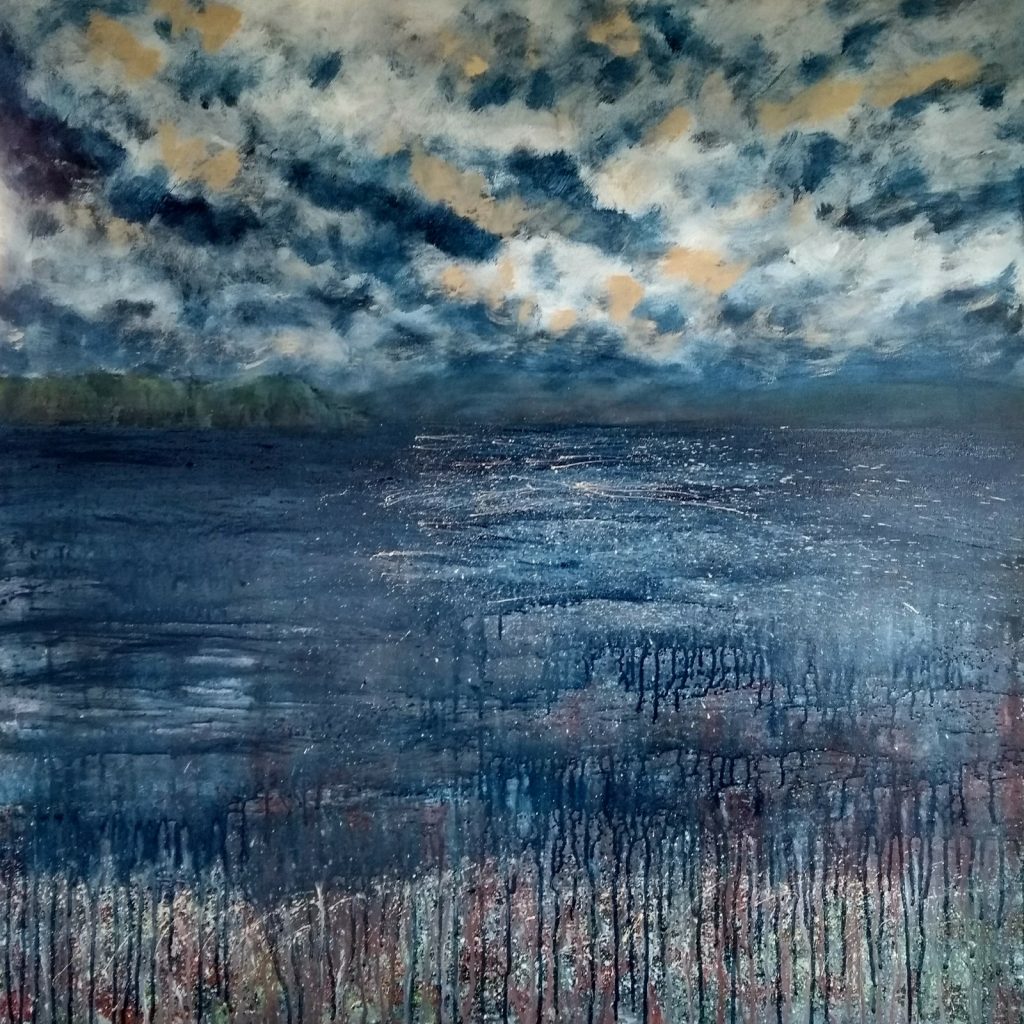 Next thought was to the headlands, to refind the shapes and increase the sense of distance between them. Masking tape along the lower edges means I need only worry about where the brushmarks need to stop on the top edge. 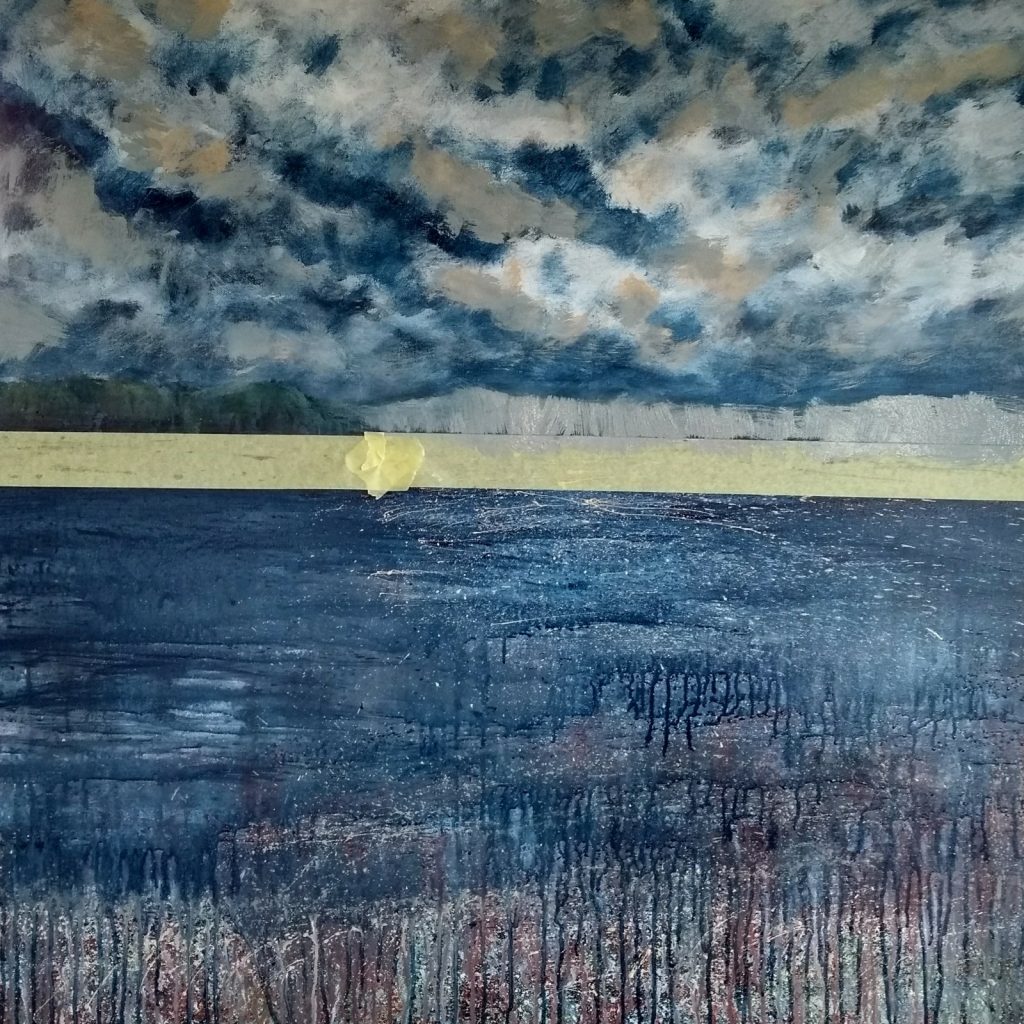 It may seem as if I’m obliterating the distant headland, t’s not quite a solid colour what becomes the underneath layers will show through somewhat. My aim is to make the headland lighter and bluer, and that I will lift off some of the paint with paper towel once I’ve got it across the whole area. 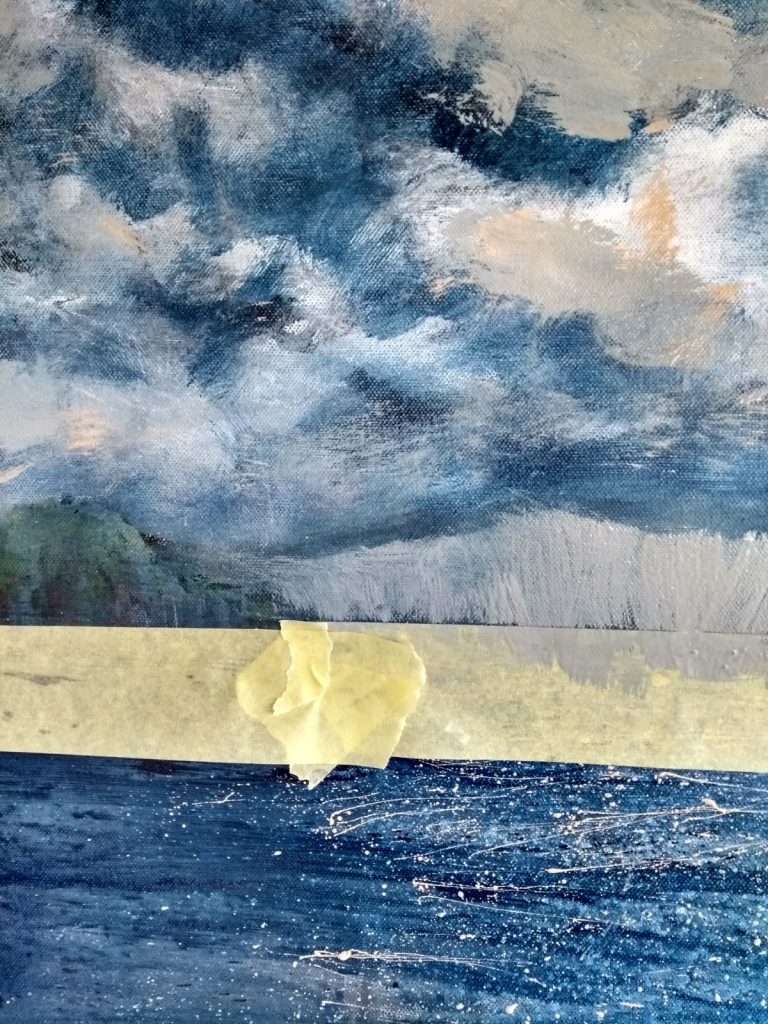 Some of that ‘headland grey’ also added to the sky. 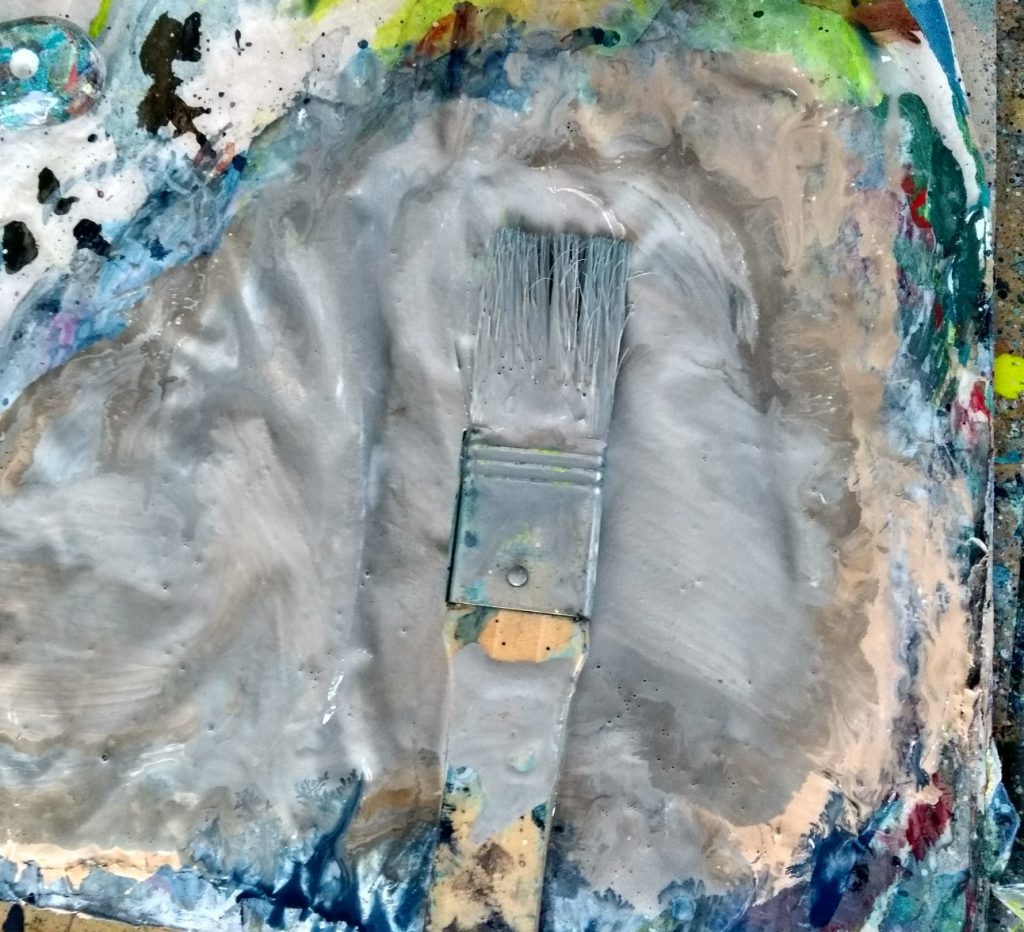 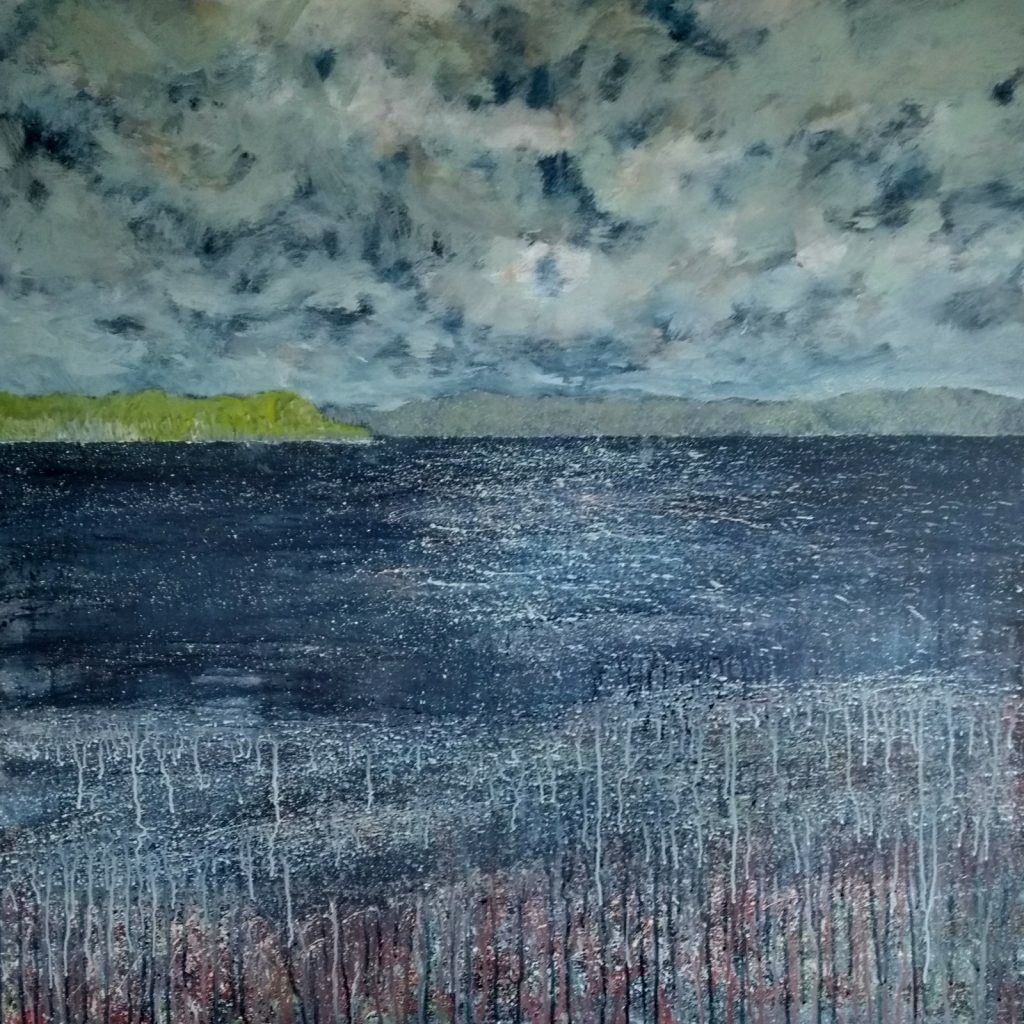 Realising I was going nowhere slowly, I decided it needed a dramatic change to shift things out of tweak-ville. So I reached for the Payne’s grey acrylic ink and started adding a new ‘drawing line’, to see if I could re-establish the energetic markmaking layer I’d so enjoyed however many layers ago. A couple of years ago I wouldn’t have done this, but over the past little while I’ve been enjoying dancing between line and brushwork. Besides, if it all went horribly wrong I could wash it off, or overwork it. 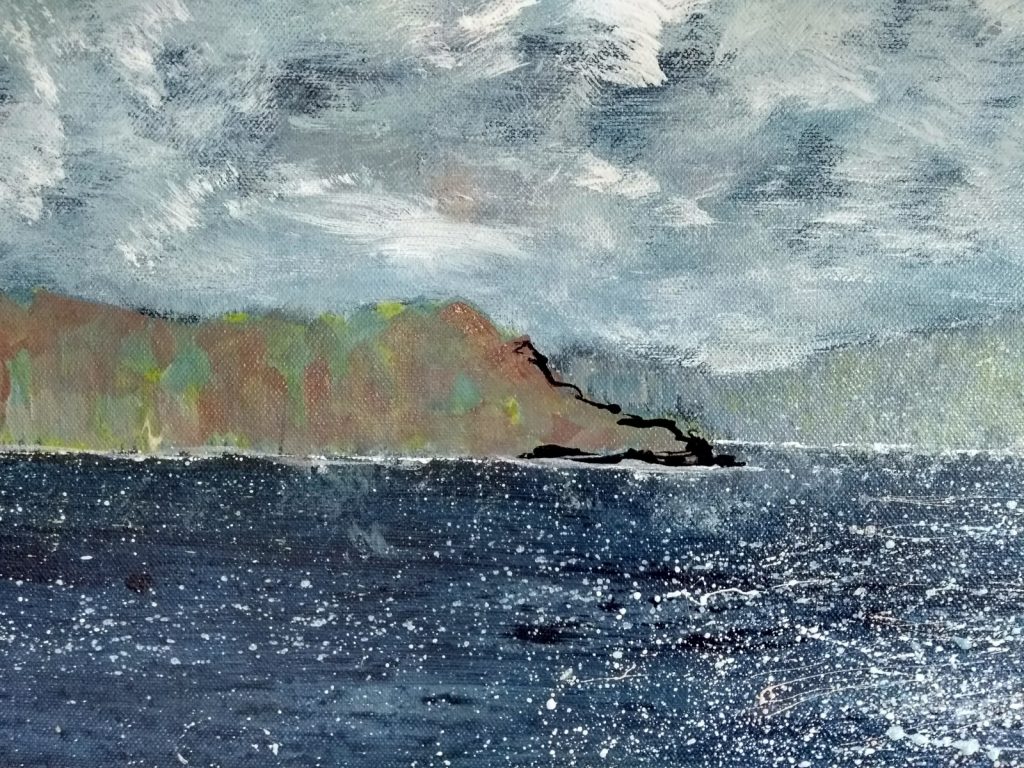 Where the ink ran into the sea, I didn’t fuss to try and lift it, just scratched into it with the ink-bottle dropper. 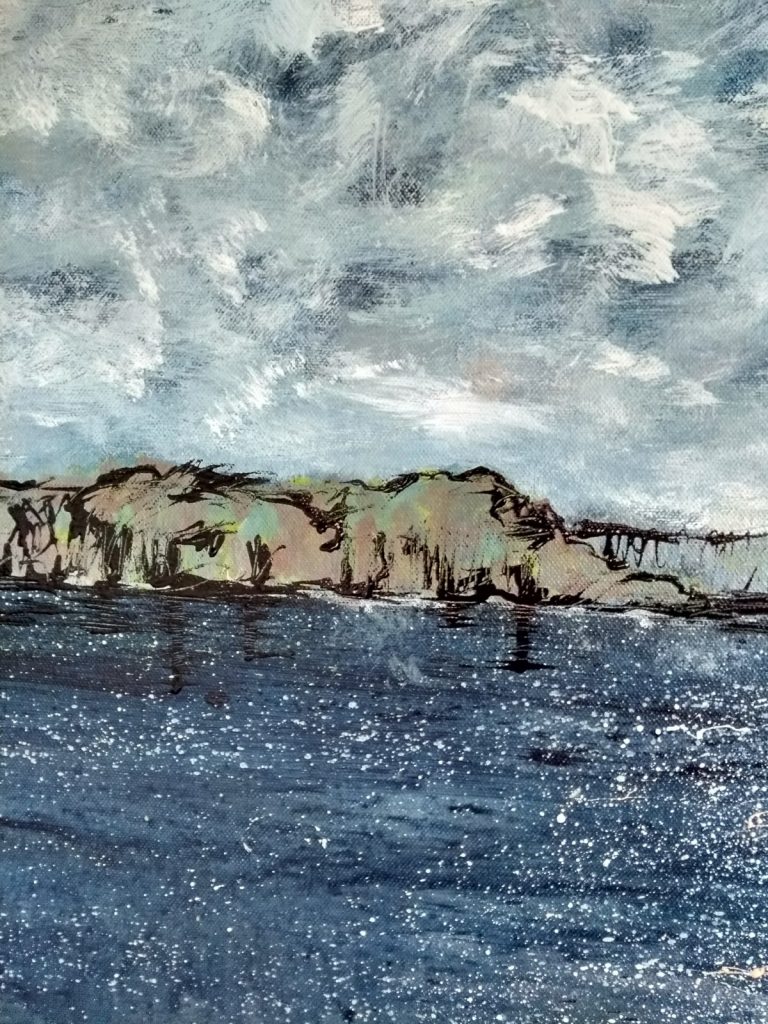 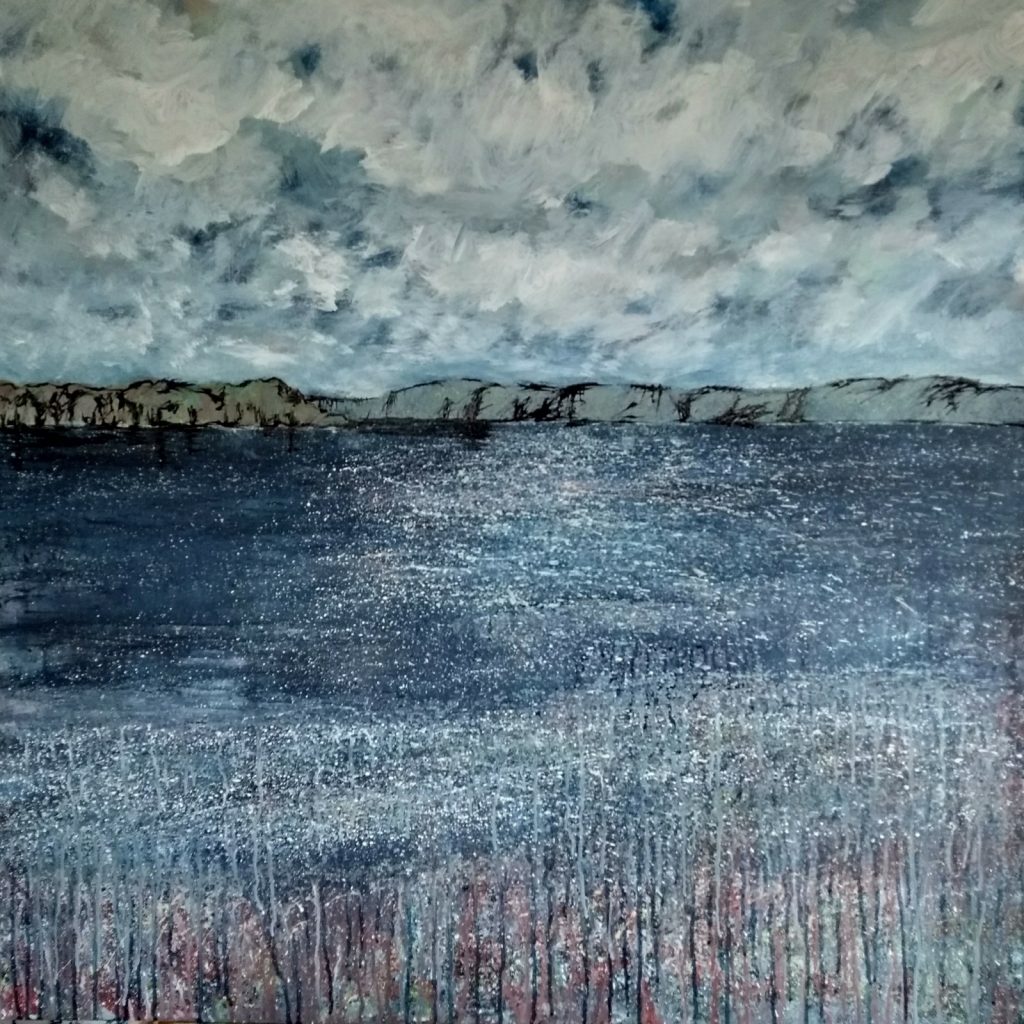 The Payne’s grey ink at this point is a bit stark on the headlands, but I was feeling re-energised by it, so continued adding it down the sea. 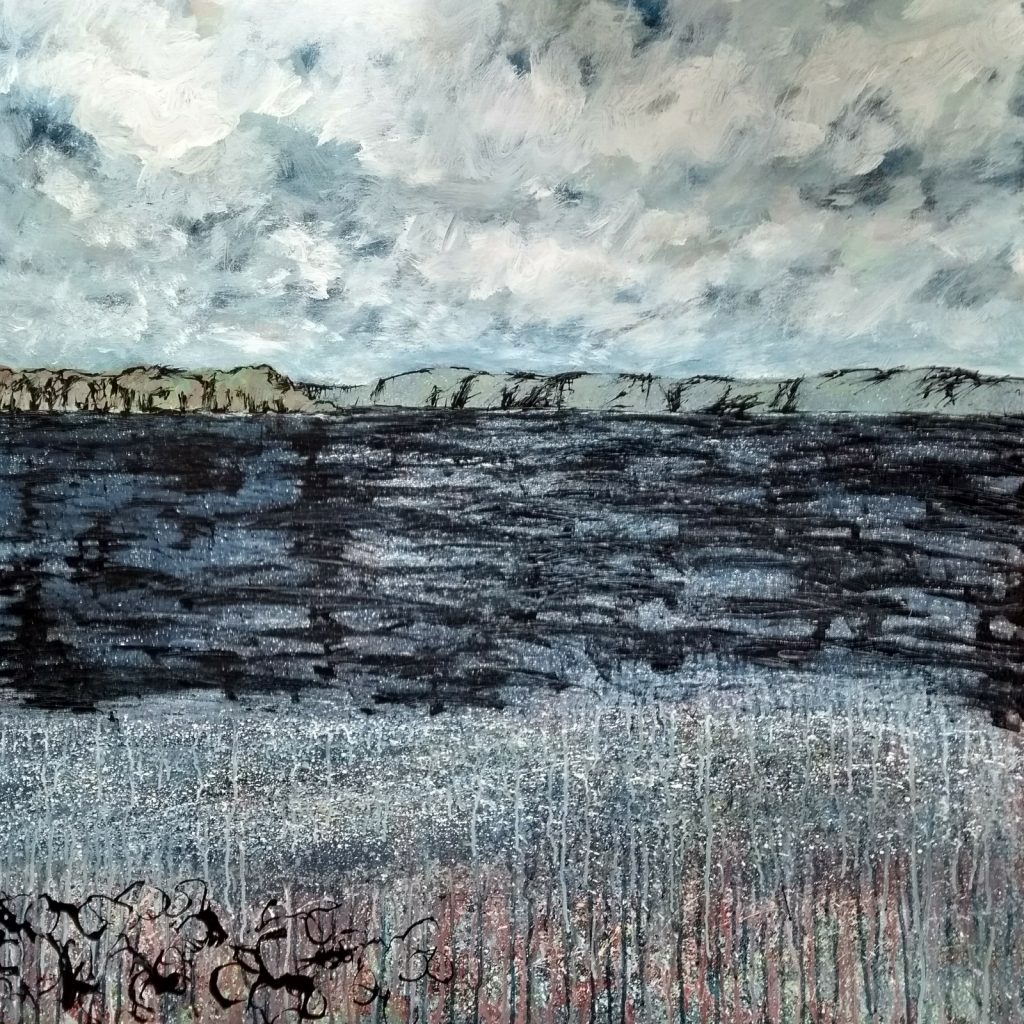 When I got to the rocky shore at the bottom of the canvas I put it on the floor to work flat so the ink wouldn’t run with gravity. 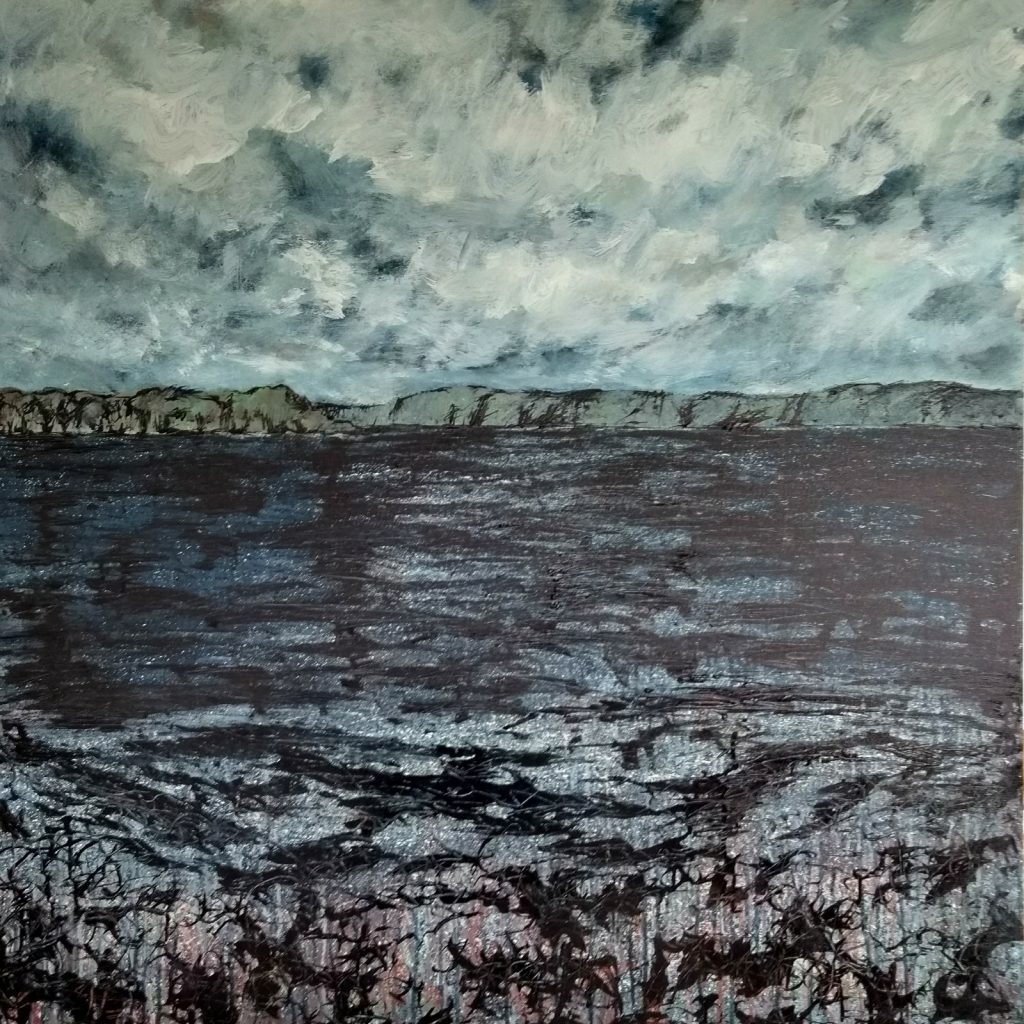 Paused with the Payne’s grey ink on the sea to add a little to the sky, and lots more white. 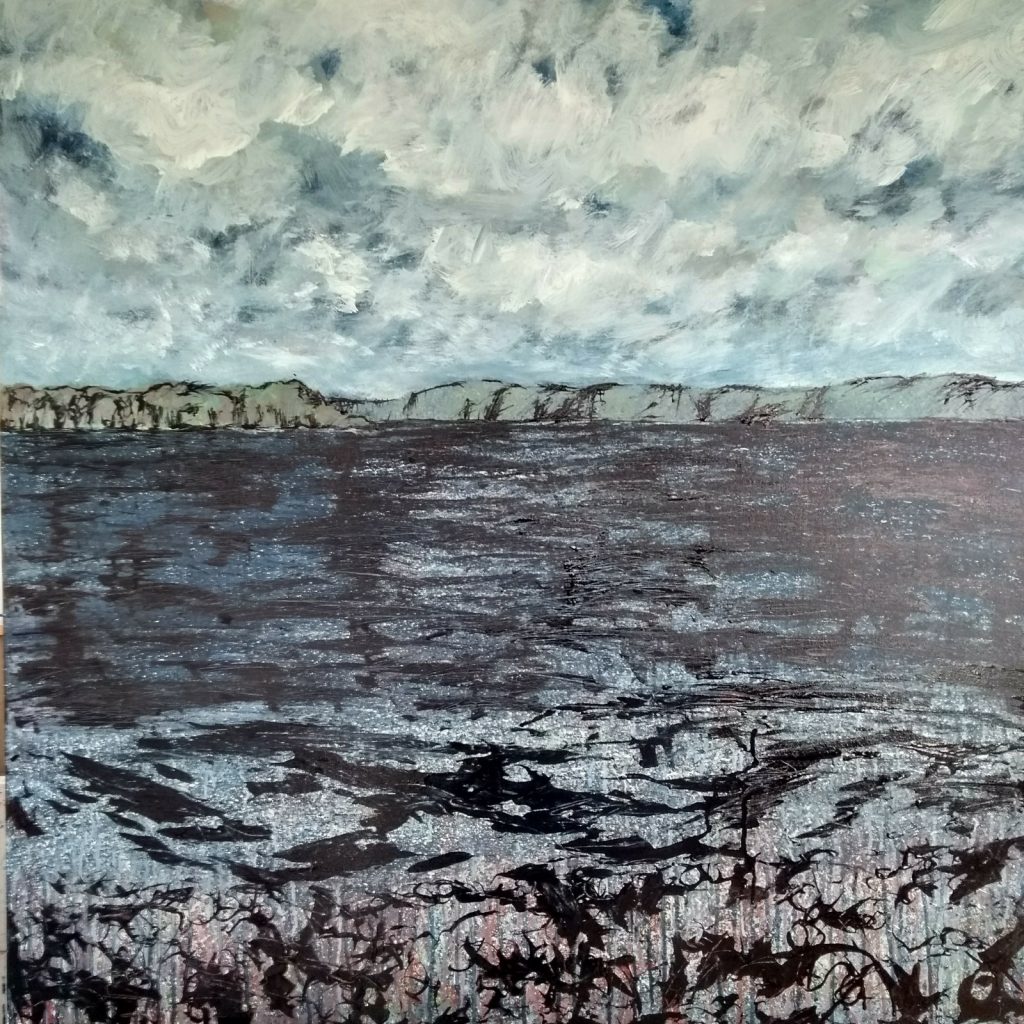 Decided the sea was too bitty, so sprayed it with lots of water and turned so it’d run at an angle. Flicked leftover white and grey onto it, sprayed again to encourage the paint running and dripping, then after a bit left it flat to dry. 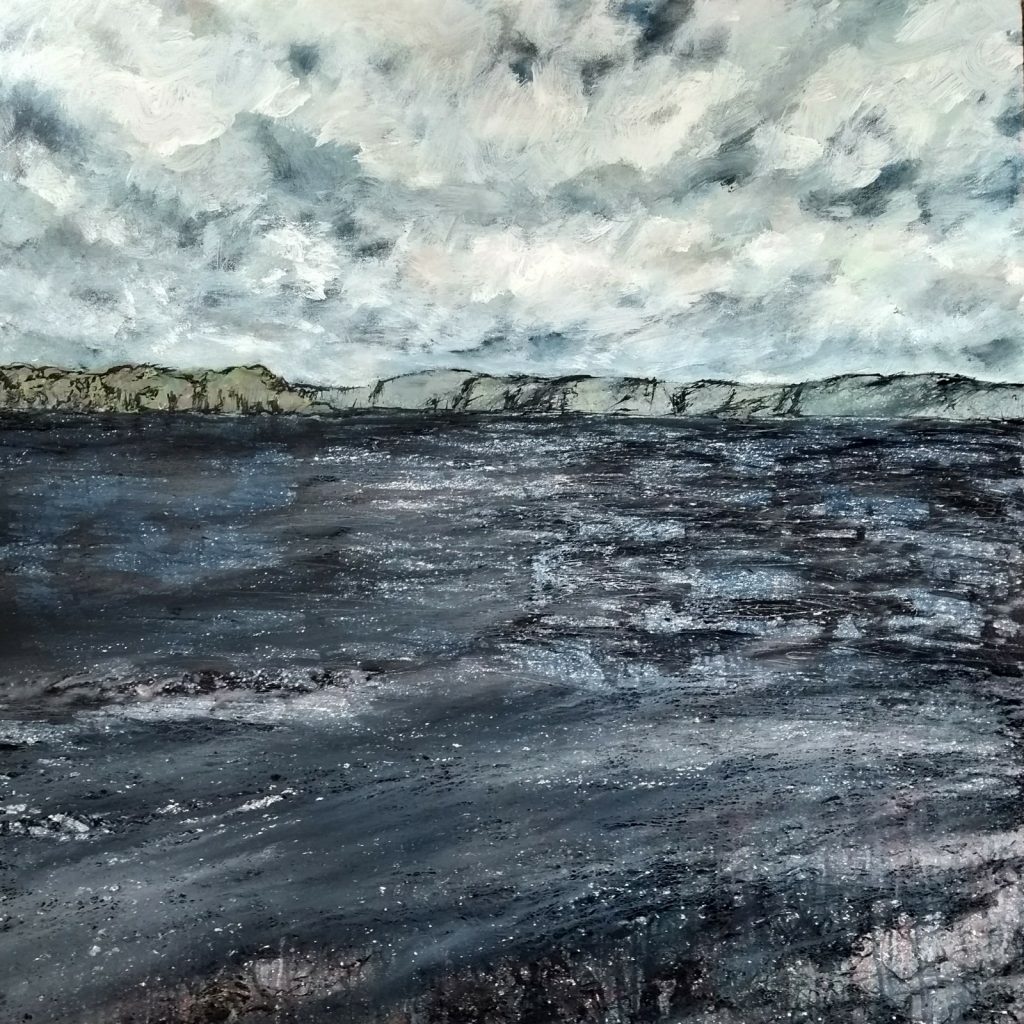 What will happen next? I can’t say until I’ve had a slow hard look at it with fresh eyes. I suspect I might find it all a bit dark, that I might add highlight to the sea and a little more colour to the foreground. 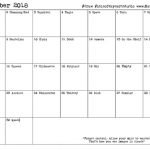 If you’ve enjoyed reading this, help me do more of it (and keep my blog advert-free) through a small monthly subscription (US$3 or UK?2). Thank you. 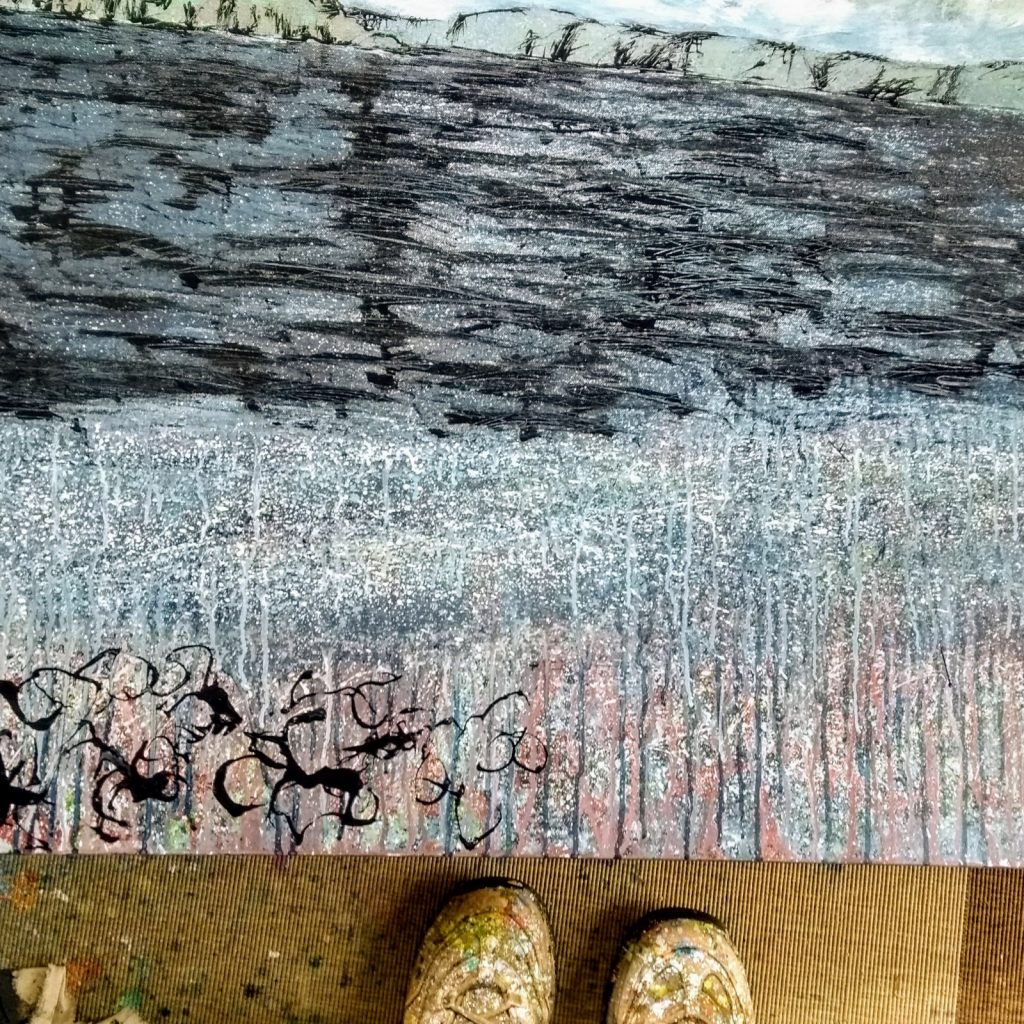