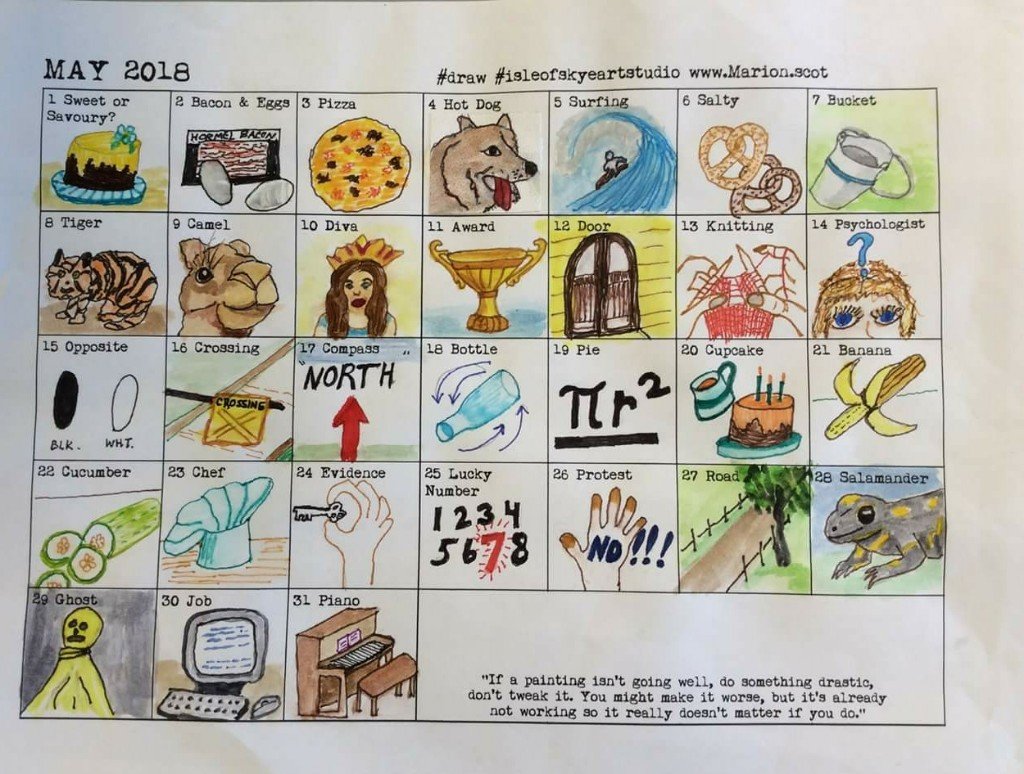 Another month’s worth of inspiring drawings; thank you to everyone for sharing your charts! It’s so interesting seeing what everyone has done from the same prompts, the similarities and differences, the lateral thinking and connections.? Take 13 Knitting, for instance, where there’s one with a ball and needles (which makes me wonder if Jerry doesn’t knit),? knitted pieces on the needles, and some with hands holding the needles (one from the knitter’s point of view and the other from an onlooker’s). Or 6 Salty, for which a pretzel would never occur to me as it’s simply not something that is part of my life (I couldn’t even tell you if the local supermarket sells them).

From Jerry, who said “Starting to get a bit more creative — also have gotten some others in our painting group involved! I tried to do a fingerprint for #24 (evidence) — it didn?t turn out too well!” 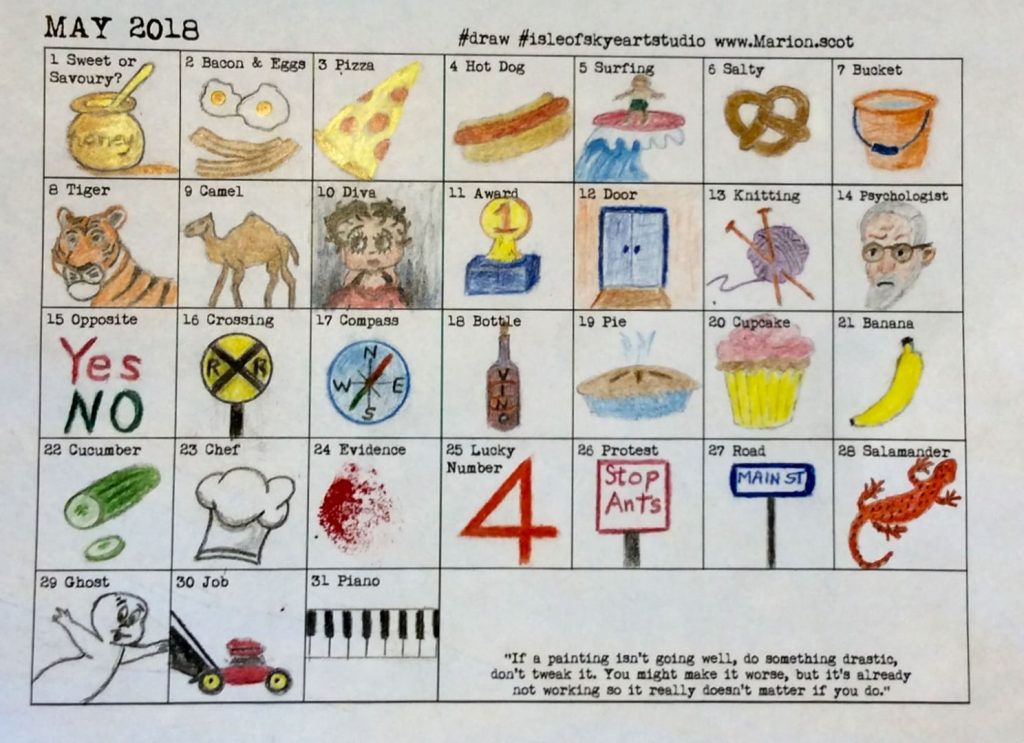 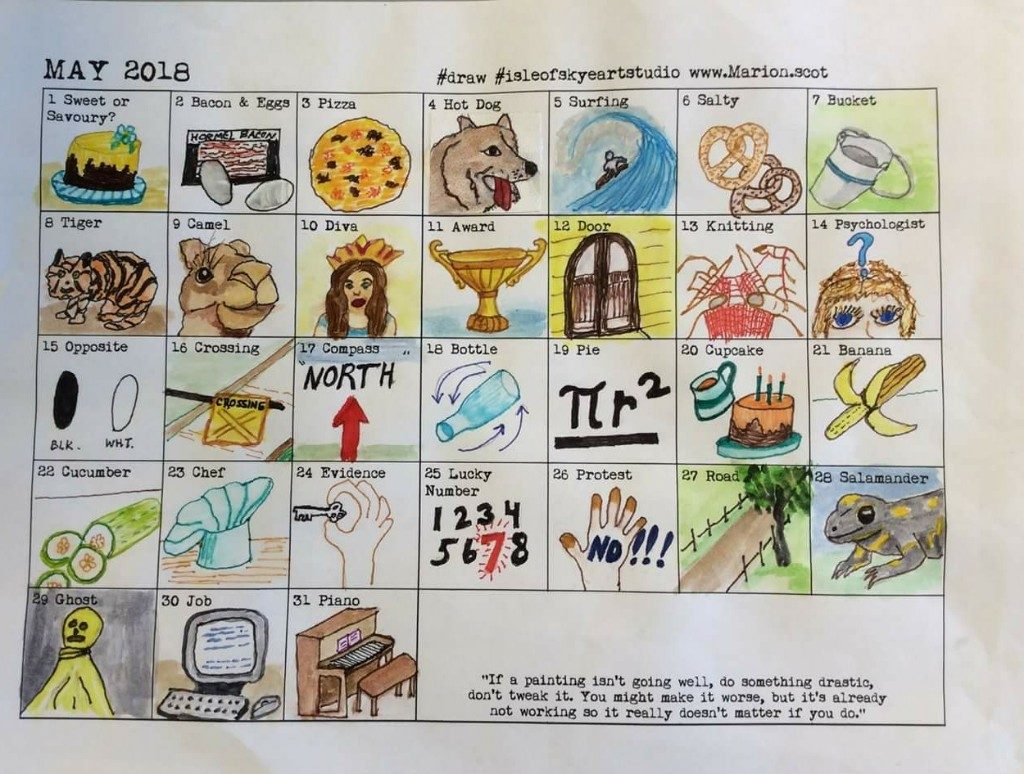 From Vanessa, who said: “I have to admit that I had to do some catch up for this month. Plus I was too quick with two days and mixed them up.” 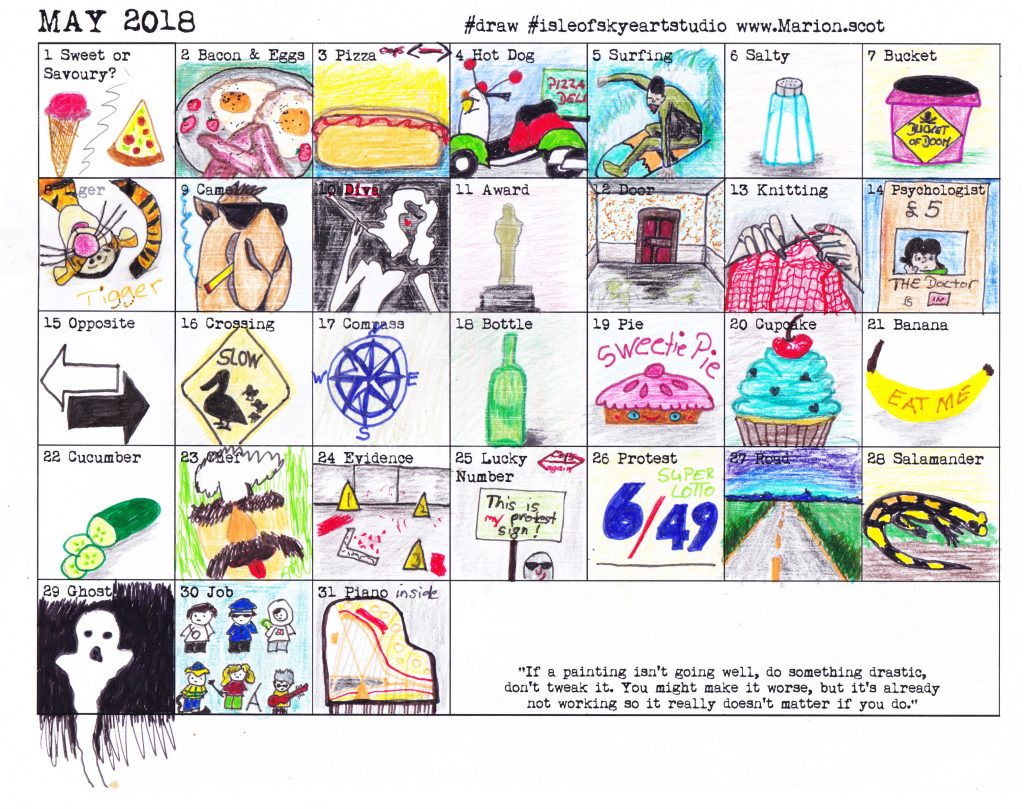 From Tessa, who said: “I got about two weeks behind this time. (Don’t tell Studio Cat.) Some of them had me stumped for a while. Caught up eventually.” 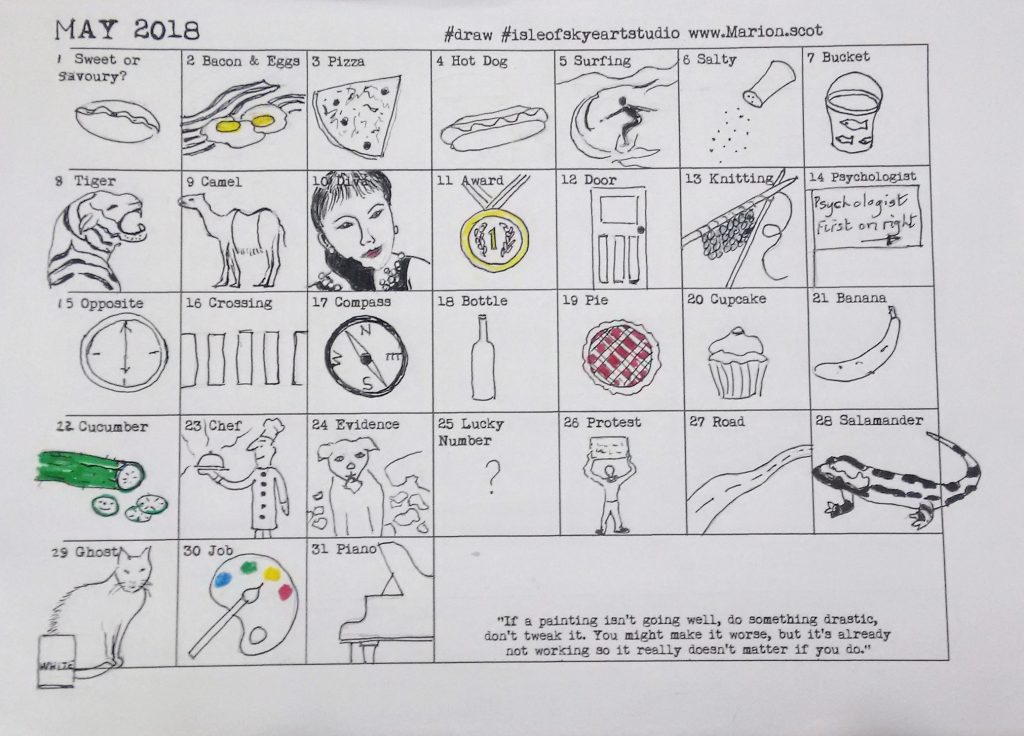 From Esther, who said: “I took the advice of the person who recommended a fixative spray this time. Thank you very much! I strongly suspect you were a bit hungry when coming up with the words this month. I found several words difficult to imagine as images and others tricky to draw. My camel and chef are sadly deformed and Brunnhilde, my Diva, is a bit lopsided. Once again, I included a cat. I didn?t forget its ears, she is a kitten and they are folded down as she stalks her prey. If I had a lucky number, I?d be able to visit Scotland and attend one of your workshops! Another very enjoyable and challenging month.” 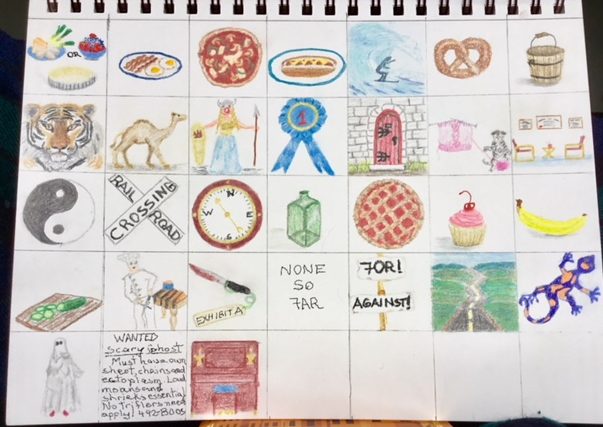 From Eddie, who said: “There are some good challenges in this month.” 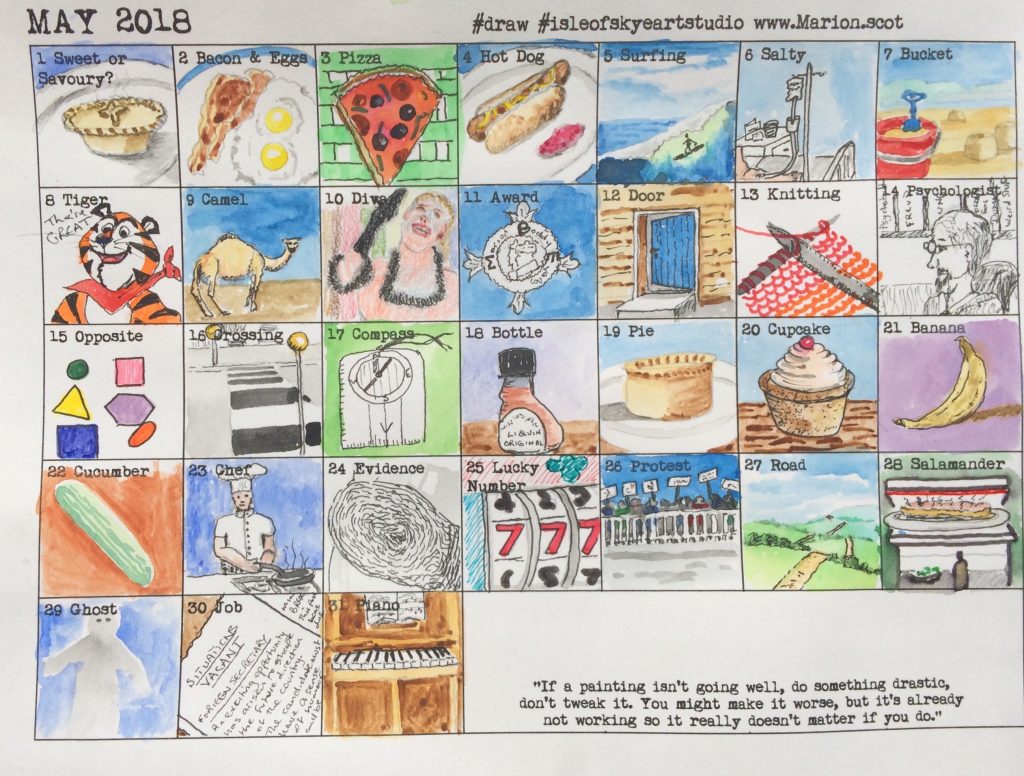 From Margaret, who said: “16 crossing may have been influenced by my visit on ferry to your beautiful island. I took 19 as pi rather than pie (which was the topic of no 1 sweet or savoury). Another enjoyable sheet and off to print out June.” 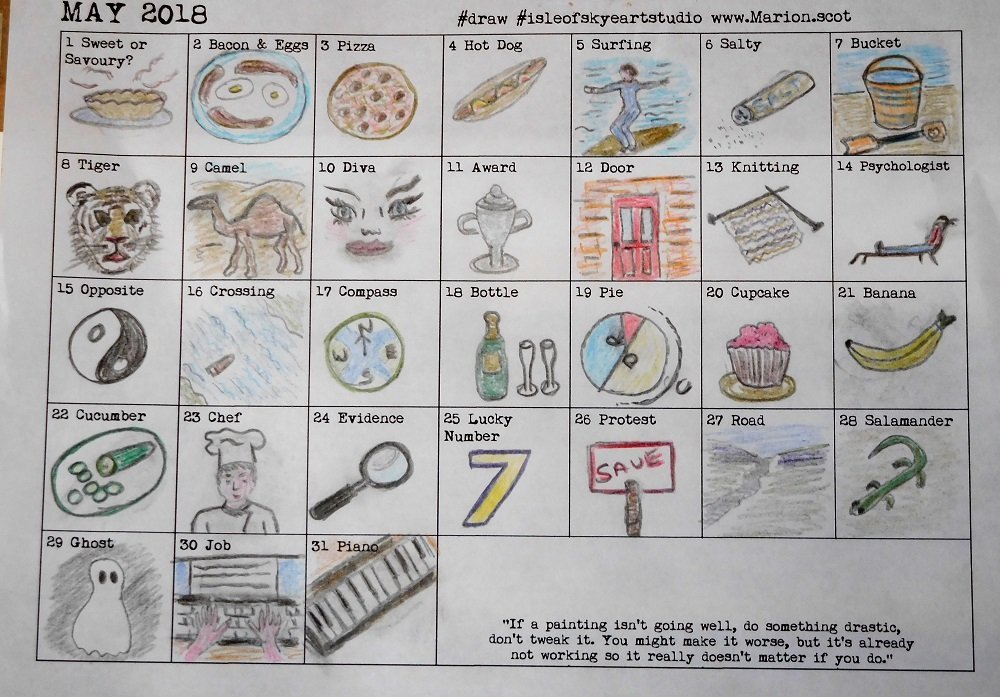 I can’t show you my May sheet because I tidied my studio mid month and now can’t find it. Theoretically it would be in my folder with February to April’s sheets, but it’s not. So instead here are a few days in what will be my display copy of my Word Prompts book for Patchings Art Festival in July. My favourite was 14 Psychologist (though I think that inadvertently making a face with 2 Bacon & Eggs might say more than my inkblot). 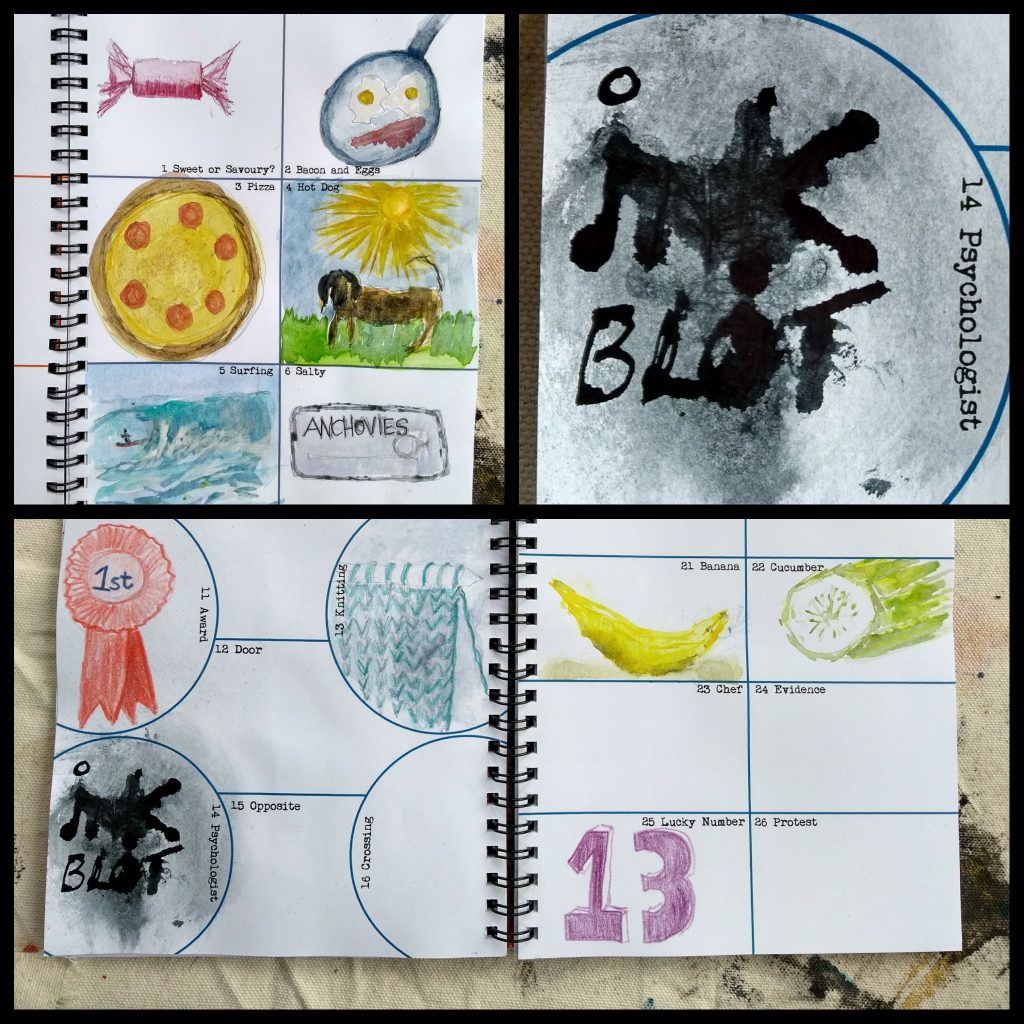 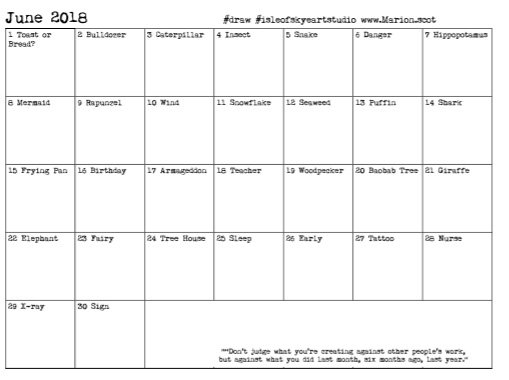