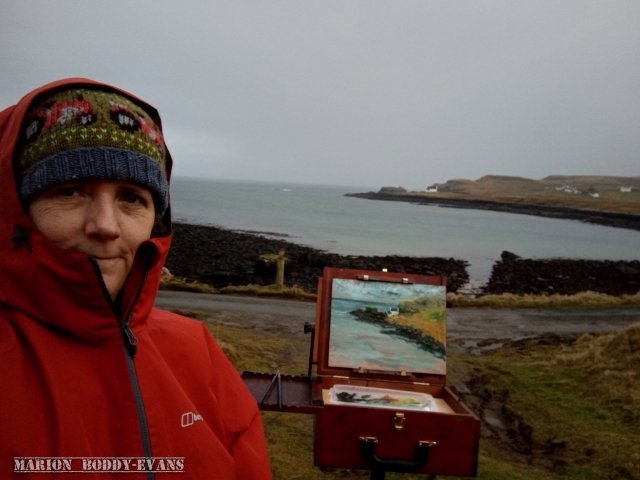 The setting: sheltered from the breeze in a small cutout in the hillside, overlooking a small bay, with the mainland in the distance emerging occasionally from the low cloud.

The problem: I’ve become accustomed to the speed with which water-based mediums dry and overpainting to fix mistakes. But of course with oil paint it’s not going to dry anytime soon and I can’t layer and overpaint in the way I would in acrylics, it’s all wet-into/onto-wet painting. When I realised I’d made a fundamental mistake with the perspective, and what it would take to fix it, I was rather fedup with myself.

If you look at the photo above, the bit of coastline in the distance on the right is what I was painting. If you look a the photos below, you’ll see that right from the start I’ve painted it as if I were at a higher viewpoint.

I’ve put the horizon line of the sea too high up, but I didn’t realise this until I painted the house. Then suddenly it was so <expletive> obvious. And that I’d made the distance between the shoreline and the top of the hill far too wide. I put the latter down to painting what I know the landscape does rather than painting the landscape as I was seeing it from this specific point.

The latter I could resolve by wiping off the rocks to the right-hand edge, then repainting. But to lower the horizon line I’d have to sacrifice the way I’ve painted the sky, with some of the board left unpainted. The clear gesso on the board is very ‘grabby’ and doesn’t wipe off cleanly back to board colour; it would take a lot solvent to do. And it’s messy.

Wiping an area also means the good is gone with the bad. I found myself being precious about the bits I really liked and having that conversation with myself about a painting ultimately living by itself not with its reference and thus would it matter. Fortunately the misty rain came in at that point and so I decided to pack up instead of facing the fact that I’d had a perspective problem right from the start. Next time I’m at this spot, I’ll hopefully remember.