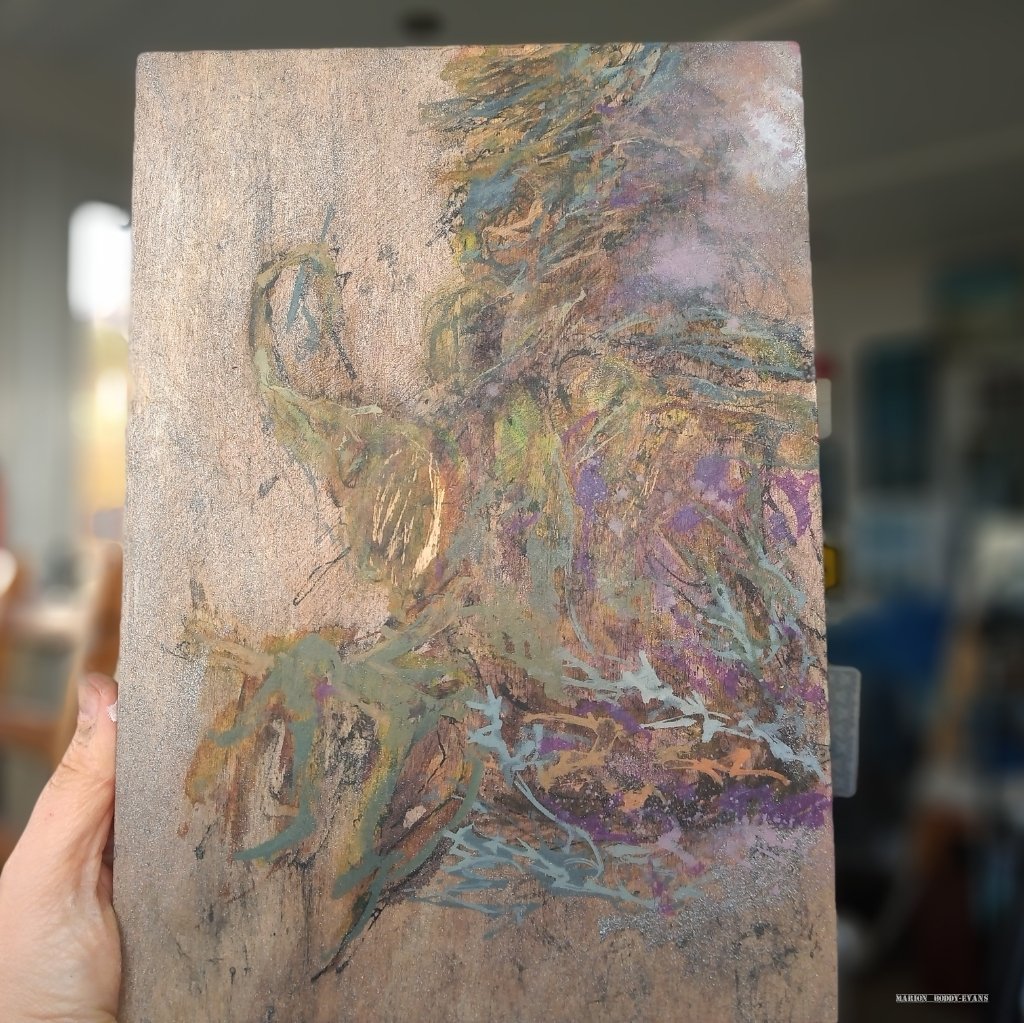 This video painting demo could be titled “And Then I Changed My Mind” because, as you’ll see, I keep lifting off the paint I’ve just put down as I decide it’s not working. There isn’t a soundtrack on this video because it’d simply be me repeatedly saying “and then I reached for some paper towel to lift that off “.

An alternative title could be “Making It Up As I Go Along”. It’s an example of what happens when I have an idea in my head and attempt to translate it into paint without a clear idea of how I’m going to get there or having already made an attempt at it, but I know I’ll recognise it when I see it.

I was using acrylic ink and tube paint on an A4 wood panel that’s been primed with clear gesso. I knew I wanted to start with Payne’s grey to give a dark layer, and the colours I would use that would give me “seaweed colours”, but beyond that my plan was simply “layers of colours”. These were Payne’s grey, white (Schmincke’s opaque white ink), yellow (swapping from ink to cadmium yellow paint when I wanted it more opaque), orange (PO71 which is transparent), magenta, and dioxaxine purple (which is becoming a new favourite colour).

One of the decisions I was making all the way through was transparent or opaque colours, though I’d be hard pushed to explain my thinking once I’m beyond the initial steps other because I was following impulses based on the colours to hand and the results so far, rather than it being clearly thought out.

If you don’t see the video above, click here to see it on my Vimeo channel.

UltimatelyI got the painting to a point where it started coming together for me, though now it’s dried I am wondering if it needs some more tonal variation (darker darks/lighter lights). I also need to fix the bit in the middle where I scratched the paint off down to the wood layer, either by doing more of this or painting over it. I just need to pysch myself up to dare to do it rather than being worried I’m going to mess up what is now working.

While I wait for myself to that point — and it will happen — I had another go at a painting loosely based on this reference photo, on A3 watercolour paper.

The painting was still wet when I took the photo — if you look closely you can see a sheen on parts of the blue-ish colour at the bottom right — and it might have pulled into the paper somewhat as it has dried. Adding some white to the leftover paint with a lot of water and dabbing this on the left (and top right-hand) has worked, I think, to give a sense of sand and shallow water. I still haven’t got the “ribbon seaweed” working to my satisfaction, but I like this overall and ultimately only I will know what’s ‘missing’.

If you enjoyed this, you can support my artistic endeavours directly by becoming a £2/$2 month supporter on my Patreon (annual subscriptions also available). I use Patreon as it deals with the VAT/tax aspects for where you live. Click here now…