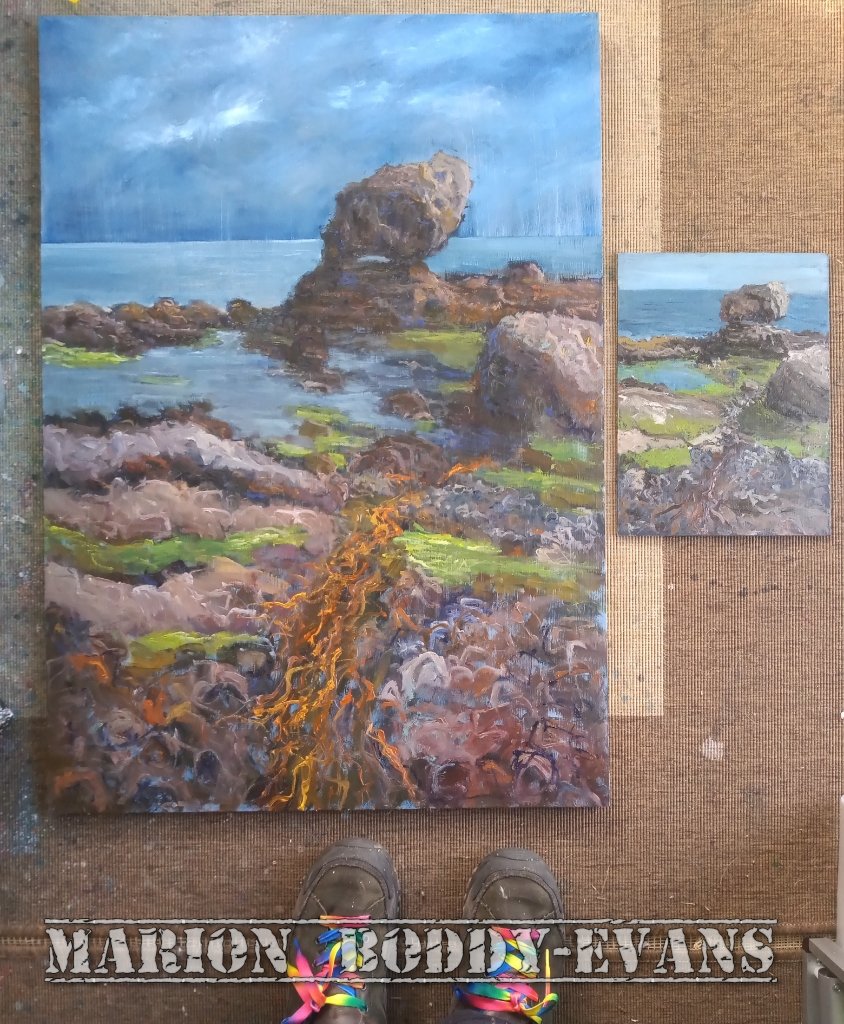 At Staffin there’s no shortage of boulders, but there’s one that’s become a particular favourite, sitting on an eroded slab with a gap beneath it that you can see the sea through. If the tide is in, it’s surrounded by water; at low tide the bigger rock slab emerges. I first painted it on a gloriously sunny day in May 2019 while my Ma plein-air knitted (see My Pebbles Got Bigger). On that occasion I used ink and watercolour on paper; this time (a sunny day in April) I used oil paint on wood panel.

The tide was going out when I arrived, and I knew from previous visits here that the water closest to me disappeared fairly quickly. In anticipation of it doing so, I took the photo below as a reminder, once I’d decided where I was going to position myself to paint.

I found a convenient rock to sit on to paint, because I know standing on loose pebbles can be hazardous if I get too absorbed with painting.

This painting had a different starting point for me, with a darkish ground (some Payne’s grey acrylic ink over the white non-absorbent primer of Michael Harding), and my initial lines plotting the elements done in orange. A lot of my previous seascapes have started with an orange ground (orange and blue being complementary colours).

The lack of inbetween photos is because I got absorbed in what I was doing and forgot to take any!

I was pleased with the result: the colours, the mark making getting looser to the foreground to move the painting into a slightly more expressive feeling, leaving some of the ground to show through.

A few days later the location was still bouncing around my brain, and I decided to have a go at painting a larger version in my studio, which was also something new for me as I don’t usually do direct studio versions of on-location pieces. I used the same colours except for black, which I felt had muddied the colours somewhat. Instead I started with Payne’s grey acrylic ink, thinking this might give me the darks I was after. I sprayed it with some water when it was partially dry and held it vertical to let the ink run.

And once again there’s a lack of photos between it at this stage and where I stopped.

One Reply to “Studio Painting From a Location Study”