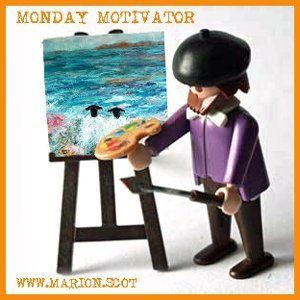 “…I had ranged the reds from pink to orange, which rose into the yellows as far as lemon with light and dark greens.”

What I take from this is to not think of a colour as limited to only tubes marked that colour, but to include analogous colours too (colours that sit alongside one another on the colour wheel). So, not thinking of red as reds alone, but including yellow and orange as well as purple and blue. For blue to include green and yellow. Yellow to include green and orange, and so on.

Or put another way, the ‘secret’ to Van Gogh’s beautiful reds is to use more than only red. 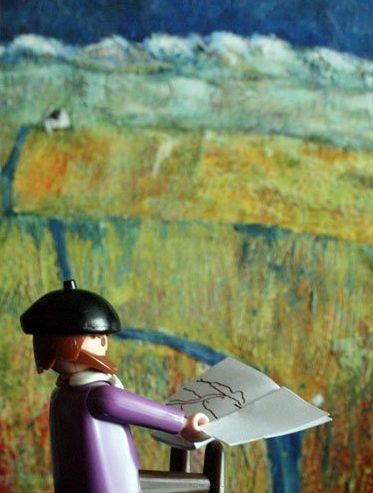 [The paintings] “deliberately invite viewers to slow their pace and to look closely …meaning is assembled from an unstable but fertile mixture of chance and memory”
— Ernst Vegelin van Claerbergen, Head of The Courtauld Gallery

“Johns seems open to unexpected encounter, and in turn his art often provokes us to unexpected ways of seeing, thinking and feeling. …? Johns has always tried not to have intentions that act as a driving force of his art. Instead he simply begins and carries on working until something happens.”
— Barnaby Wright, curator

Jasper Johns’ Regrets series developed from a chance encounter he had with a reproduction in a Christie’s auction catalogue of a photo of a young Lucian Freud sitting on a bed in the Francis Bacon’s studio. I chanced upon the exhibition when at the Courtauld Gallery in London to see the Egon Schiele exhibition (more on that later this week). Like most people, I initially merely glanced at the Regrets paintings as I walked through the room where they were, intent on getting to Schiele, but am glad I did come back for a closer, slower look.

There are layers of meaning and symbolism that can be unpacked, on “themes of creativity, memory, reflection and mortality”, which the Courtauld catalogue (and I presume the MoMA catalogue) explains. About how in his process of exploring and transforming the photo in numerous experiments using oil, watercolour, pencil and ink he mirrored and doubled the original image, and in doing so, the form of a skull emerged in the centre of his new composition. This ?apparition? creates a reminder of death or memento mori at the heart of the works.

But I only found that out afterwards when I read the catalogue. What fascinated me was how the photo guided my interpretation of abstract paintings which, without this reference or anchor in reality, I probably wouldn’t have spent as much time look at. My favourite was an ink painting on plastic paper, and impact of this on the mark making which has ‘dissolved’ lines, spread shapes with soft edges. It was mesmerizing, my eyes moving from one shape to another, feeling the hand of the artist and the happy accident of the paper, getting lost in the pattern while simultaneously overlaying the photo in my mind, engaging imagination and intellect in that special way that painting does.

“His sketchbooks reveal a background of experimentation with bands and blocks of colours placed side by side in various combination.”
Source: Vision and Invention by Calvin Harlan p85

I’ve often thought of the colours in the view from my studio across the Minch as being part of a colourfield painting by Rothko or a seascape done in greys with a narrow tonal range by Whistler, but there’s also plenty of stormy weather and dramatic atmosphere to relate to Turner. Creating a sense of distant islands, with the sun forcing its way through fast-moving clouds above a wind-whipped sea, that’s what’s on my mind today.

“The cast shadow creates an effect just like a splotch of ink that is dropped on a subtly modelled drawing done in delicate halftones. For this reason artists generally eliminate, or soften, cast shadows by toning them down, so that the form beneath can be read.”

A cast shadow is the one that “falls on the ground” when the sun or strong light shines. It is more like a dark glaze than a streak of opaque black; we still see a lot in a shadow. Yes we want tonal contrast in a painting for visual interest, a fair distance between the lightest and darkest tones, but tread softly, with colourful dark footprints, don’t stomp shadows in with flat black. A cast shadow isn’t the same throughout either, it gets lighter the further away it is from the object creating (casting) it, and the edges softer (less distinct).

A form shadow is the “dark side of the moon”, the darker tones on the opposite side of an object to where the light’s falling. These are even softer than cast shadows. They are essential for creating the illusion of 3D in a painting or drawing. How much form shadow you see depends on the light direction; if most of the subject is in direct light, there’s very little (unless you walk around to view the other side of it). If you find the thought of two types of shadow confusing, try labelling a form shadow as “lack of light” instead.

“When [Monet] reduced his compositions to horizontal bands or combinations of simple shapes, he relied on colour and brushwork to bring the painting to life.

“…every area of the painting is enlivened in some way… a sense of space and recession is created entirely by nuances of colour and inflections of the brush.

“…skip strokes, where a loaded brush is drawn very lightly across the canvas so that it skips, depositing paint where it touches, allowing the colours below to show clearly through these superimposed accents, and thus creating an active interplay between the success paint layers”

The way we apply colour, which colours we use and how many are in a particular painting, all form part of our individual painting style. I was talking to an artist over the weekend who’d been working with some new colours, getting to know which had the degree of opacity she was wanting and which were too translucent. Adding titanium white came up; being so strongly opaque it can shift a transparent colour into translucent, but with the problem that it also lightens a colour.

Might this be counteracted by subsequently glazing over with the transluscent colour to enrich it? But that would add another round to the creation of the painting. More work and more time, as well as a delay in getting where you want to be. Ultimately the answer lies in trying each, in painting up a colour chart, in getting first-hand knowledge of the properties of individual pigments.

If you’re feeling jaded [colour pun intended], have a rethink about the colours on your palette. Do you use mainly transparent or opaque? Are there any you’re no longer using? When last did you try a new one? Do you layer it or physically mix? Are you using too many? In some of my seascapes I’ve used only titanium white, Prussian blue, and raw umber over a cadmium orange ground, though generally there are a few more colours involved, especially when it comes to mixing interesting darks.

“The freedom of Eardley’s gestural painting in her landscapes is contained within very well thought-out compositions. The use in all her paintings of brilliant touches of colour in key positions shows her schooled eye for balance and dynanism.”
Source: Joan Eardley by Fiona Pearson, National Galleries of Scotland p9

Brilliant in thoughtfully positioned and in intensity of colour. To take one example from the paintings Scottish artist Joan Eardley: look at the reds on the chimneys of a painting titled Snow. Then at the yellow in the bottom right-hand corner, which is echoed in the central foreground. Muted to an earthy, ochre yellow it dances across the landscape, ending mixed with the red as a touch of orange in the distant cloud.

Small touches of colour that change the whole mood of a painting, and pull your eye across the composition. Did Eardley plan the placement and choice of the beforehand or did it evolve? I imagine a bit of both. Ultimately it doesn’t matter when it was decided, only that it was.

I believe in what the subject makes you do, yes, I do believe in a subject in the sense that it’s your starting point. And I suppose I am essentially a romantic. I believe in the sort of emotion that you get from what your eyes show you and what you feel about certain things. … I don’t really know what I’m painting. I’m just trying to paint!”
— Joan Eardley (1921-1963), BBC interview 1963

I’ve been looking a lot at the flower/field/landscape paintings by Scottish artist Joan Eardley. I like her abstraction, with enough realism to anchor it, giving viewers a path to connecting with and understanding a painting.

Last year [1886] I painted almost nothing but flowers to accustom myself to a colour other than grey, that’s to say pink, soft or bright green, light blue, violet, yellow, orange, fine red. And when I painted landscape in Asnières this summer I saw more colour in it than before.”

Looking at the daffodils in the sunshine this spring, all the different yellows, I’ve found myself thinking about that quote attributed to Picasso about “they’ll sell you thousands of greens but never the particular green you’re after”. The yellows of the same daffodil change as the sun shifts, as the light falls on different parts, as shadows move, blooms open and fade.

To paint them I feel as if I need to dig out every yellow, blue and green I’ve got along with some reds and oranges. The temptation will be procrastinating into colour mixing. The way around this is to mix on the canvas not my palette. I may still get distracted by colour, but can all form part of a layer in a painting.

“It is the only point of getting up in the morning: to paint… to make something even better than before, not to give up…”

“If I knew exactly what I was going to paint in the next minute why would I want to do that?”

If you do have a specific thought about what you’re going to do but then the painting suggests something else, follow it to see where to leads. You can always go back to what you’re originally thought to do (writing a note in a sketchbook helps remembering what it was!).

“… indigo with terra sienna, Prussian blue with burnt sienna actually produce much deeper tones even than pure black. What I sometimes think when I hear people saying ‘there is no black in nature’ is — there doesn’t have to be any black in paint either.”

Talking to another local artist about the differences and similarities between our paintings, one thing that came up was her use of black. Often strongly as one of the final layers on a painting; thinly glazed in places, quite opaque in others. This layer is not mixed with colours, it’s embracing black as a pure colour. It’s striking and dramatic.

I tend to work with a mixed black, and to invite ‘happy accidents’ by not being meticulous in mixing the colours together so that occasionally I’ve suddenly got a bit of blue (or red or green or whatever else is in there), emerging beneath my brush or knife.

It’s a choice of style and working method. Neither is better. Explore both, feel which you prefer; it may even be it’s not an either/or for you.