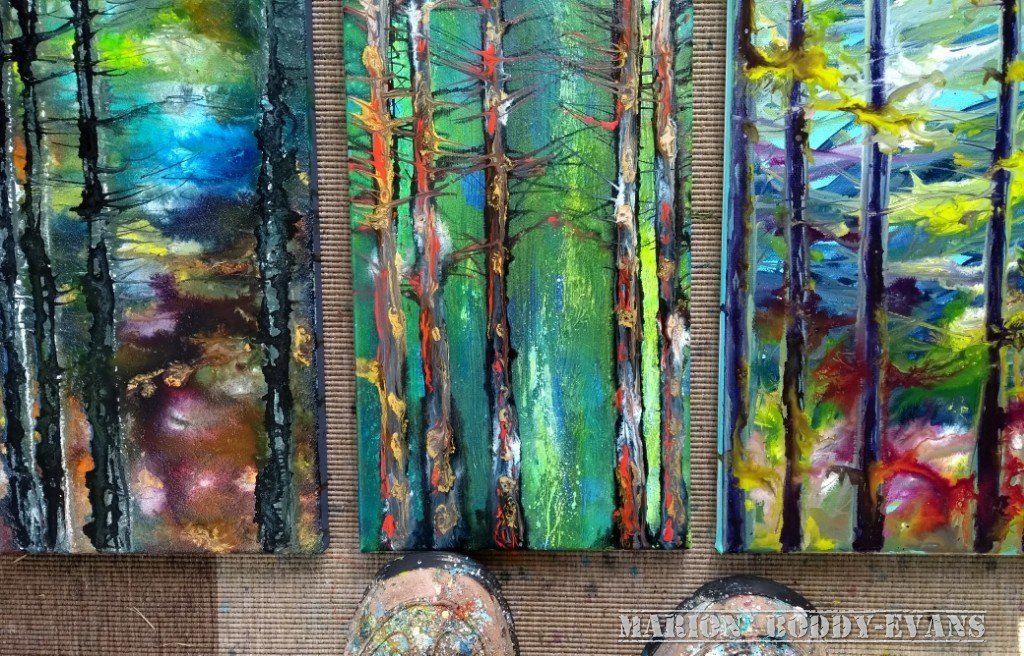 I have been wanting to try a tall trees painting (see this month’s painting project) using acrylic ink on canvas rather than paper, and have ended up with three in quite different colours. I’m unsure whether to move them closer to one another (that would involve choosing a favourite, which I think is the middle one) or let them be individuals.

Two were painted over unresolved paintings (one a waterfall, the other a seascape). The leftmost canvas is covered with black lava paste and the middle with my favourite light texture paste. I did this because reusing a canvas ‘permits’ experimentation with less worry about ‘wasting’ the canvas. Also because I thought the texture could work well and didn’t have to wait for it to dry. The rightmost canvas I covered with light turquoise first, which it wasn’t quite dry when I started on the trees.

I mostly used acrylic inks but also a few fluid colours which are more opaque and spread less wet into wet, such as the orange in the central painting. Iridescent yellow and gold too. Canvas size 20x50cm (8×20″). Brushes were a rigger and smallish flat, both with long handles. I painted flat on my table rather than vertical at my easel so that gravity wouldn’t pull the paint.

The paintings weren’t totally dry when I took the photos, and I will look at them afresh tomorrow and decide if tweaks are needed.