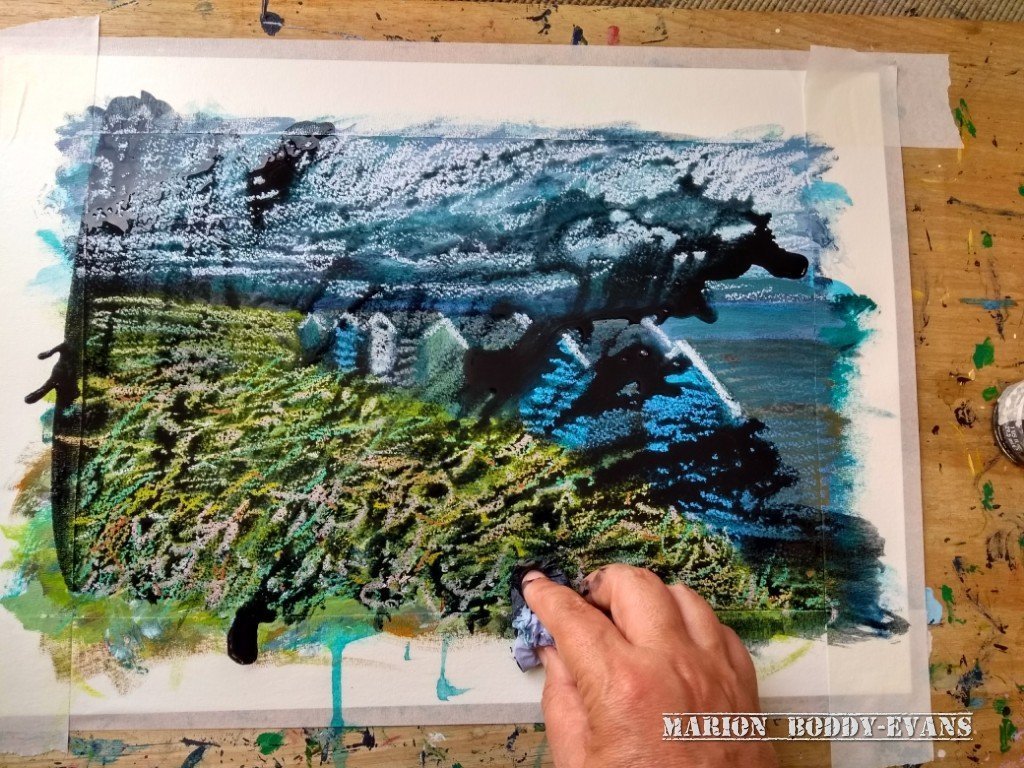 This is the story of my second attempt at July’s project. Plot spoiler: It does not have a happy ending.

I wanted to create a painting with more interesting mark making on the huts than than my first attempt at this scene, which was this:

Sometimes it feels like a painting goes from a promising start to bad to worse to give-up-now. I try to remind myself it’s also an opportunity to push it past the usual point of stopping, to attempt things and see what happens. It’s already not working, so it’s not as if I will ruin it; at worst I just won’t succeed in rescuing it and use up some time and materials.

First I tried adding some oil pastel. Helped a bit, but felt I was just faffing at it not resolving things. So, frustrated and irritated, I put the painting flat on the floor and poured some acrylic ink over it. (Payne’s grey, though it looks black in the photo.)

This video is a sequence of photos taken as I painted this, except for the bit where I worked on the floor adding the ink.

I’ve since had a third go, and although it lost the plot in terms of perspective and shadow direction, it has an energy I like. I might still add some coloured pencil or thin acrylic over the too-dark shadows. Or I more likely I’ll leave the painting to fester in the pile of also-rans and focus on sorting out August’s project instead.

If you’ve still to have a go at this project, here’s a ‘starting point’ for the beach huts courtesy of Cathi and Sarah, done as we painted together recently. Note the horizon for the sea will be below the top of the huts.

2 Replies to “Trying (and failing) to Rescue a Painting”