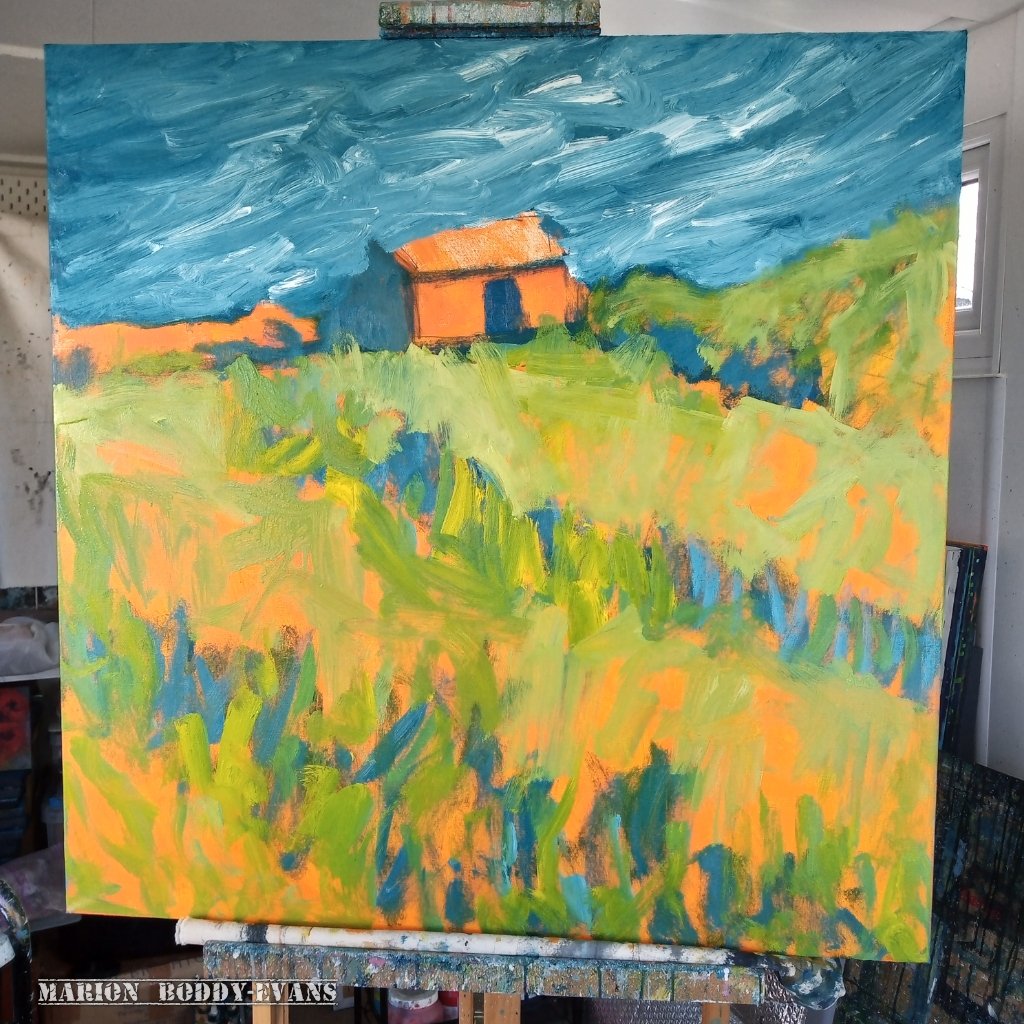 A few weeks ago I did an on-location painting of an old croft house. There were some issues with perspective (which is something I have to really think about) but overall I was happy with it. And I thought I’d internalised where I’d gone wrong with the perspective, having consulted the in-house art critic for whom perspective is easy.

I’ve been thinking about this old house and doing it on a bigger canvas. A few days ago I got out a 100x100cm canvas and put it up on my easel.

I didn’t do thumbnails in my sketchbook (even though I encourage you to do so!) but just played them through my mind as I sat looking at the canvas. And then all of a sudden yesterday afternoon I was struck by a desire to start, and sketched in the composition with an acrylic marker pen, then added orange and yellow to the “not-sky” area.

I then painted in the “sky area” with blue and white, cleaning my brush of the blue into the foreground (where it’ll create a colour connection across the composition and work as a shadow colour) before adding some yellow (which with the blue on my unwashed brush and the still-wet blue on the canvas mixed to greens) and then some white to get the lightest green.

And this was when I realised I’d made an error in the perspective on the cottage. Not like a little mistake, but totally the wrong way around. At least I’d noticed before the in-house critic came along. So I forced myself to slow down (no point getting the sky and foliage working before the house), to think it through from the basics and redraw the perspective.

I edited one of my snapshots on my phone to draw some lines on it to help me. The lines aren’t straight because they’re done freehand; if I’d been using editing software on my computer I’d have used the straight-line tool. (Click here for the original photo if you’d like to have a got at painting this too.)

Using a rigger brush and Prussian blue (which is what I’d used in the sky), I redrew the house.

And then I continued to “just add paint”.

The “rusty roof” colour is created with Prussian blue, titanium white, cadmium orange, and magenta i.e. I added some magenta to what I had already been using. Notice how I’ve also used some of this elsewhere in the painting so the colour doesn’t sit isolated on the roof only.

This is where I stopped painting for the day and went to check my perspective with the in-house art critic, who saidthe back wall of the house needs straightening but overall only a little bit awry.

This photo is to show you that I had my on-location painting in view whilst I painted.